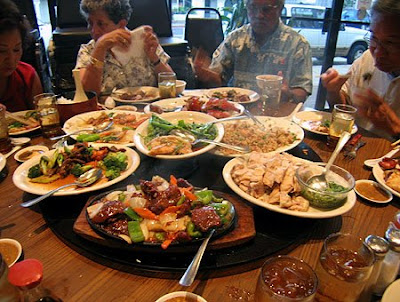 Winnipeg has only a small Chinatown compared with some other Canadian cities, but right in the middle of it was the Shanghai Restaurant. The Shanghai had probably been a pretty classy joint in the 1940s and its decor remained stuck in that time warp. It served up basic Chinese food in large quantities at reasonable prices, making it a favourite with student diners. But the outstanding thing about the Shanghai is that it had the surliest waiters in the entire city. The waiters were all middle-aged men who wore a standard uniform of a white dinner jacket with black pants. In their lapel, each waiter wore a button with a number on it. Maybe it was this dehumanizing identification system that made them so surly, or maybe it was just a job requirement. Anyway, my sister and I used to eat there with the express purpose of trying to get our waiter to unbend and crack a smile. It was an ongoing battle which we always lost, except once. I can't remember what we said or did on that occasion (aging is hell on memory) but our waiter smiled and laughed and then walked sheepishly away. I'm sure the other waiters took him to task for his lapse.