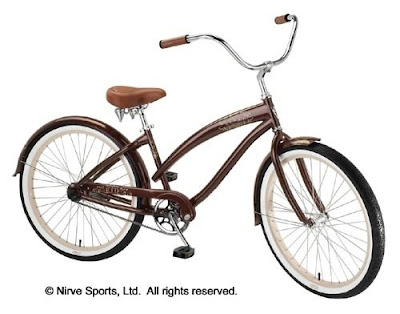 5. I pedal about on an old-fashioned single speed women's bicycle.

Despite my lack of athletic ability (see yesterday's post), I do reluctantly try to exercise on a sporadic basis for health reasons. The city of Edmonton has kilometres of fabulous paved hiking/riding trails running throughout its spectacular river valley. So several years ago, I decided to buy a bicycle to take advantage of the river valley's inducement to exercise.
Now, when I was a kid, all bikes were single speed. In high school, 10-speed bikes became the rage, but I never had one. So I have never learned how to use gears on a bike. I see no reason to learn now. Anyway, leaning forward horizontally over the handlebars to ride seems unnatural to me. I want to pedal while sitting upright, biking along slowly and with dignity, befitting the middle-aged lady I am. So I bought an old-fashioned single speed women's bicycle. It has balloon tires. And it has a comfy "sofa seat" to cushion and support my aging bum. And yes, it has a wire basket in front and a little bell too.
But despite all this, I must confess that when I put on my cool visored bike helmet and padded-crotch lycra bicycle shorts and go cycling, I feel like such a total JOCK!!!
Posted by Debra She Who Seeks at 06:55

It is for me because it's such a novel feeling, ha ha!