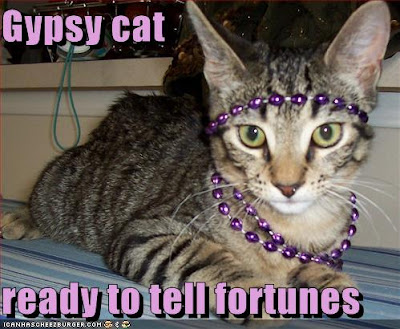 I have FINALLY received another letter from my wayward cat, Madame Zara (as she insists on calling herself since running off with the gypsies). What a relief! I was starting to worry.

Hello! I know it's been almost a month since my last letter but I've been rather . . . shall we say . . . preoccupied.

After my disastrous love affair with Dexter, my gypsy band got the hell out of that little Texas town. We went to Austin, where at least the weather was somewhat better. Despite the bravado in my last letter, I was too broken-hearted to perform my wild gypsy dancing, so I earned some money by reading tarot instead.

I was right in the middle of reading the cards for two lovely gentlemen cats named Jax and Henry when WHO should burst through the door but the POLICE! It turns out that Texas still has some old outdated law on the books that criminalizes any form of fortune telling! Down at the police station, Jax and Henry were quickly released after their human (named Strawberry or Blueberry or something) came down and raised a high holy stink because they were just innocent client bystanders.

However, I was not so lucky. I was booked, paw-printed, had my mug shot taken -- the whole nine yards. And after a quickie trial that I swear was a total MISCARRIAGE OF JUSTICE, I was sentenced to an entire MONTH in jail. Yes -- *sob* -- I am now a felon! 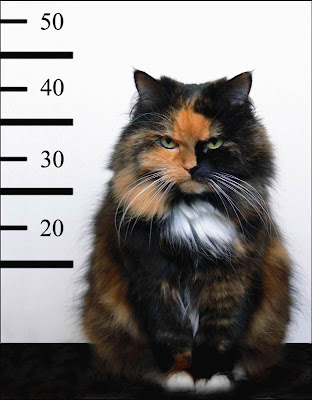 Oh well, at least the food is not too bad in here. And some of the other pussies are cute in a Caged Heat kind of way. I get out in about two more weeks. So until then, many hugs and purrs from your poor little jailkitty. Love, Madame Zara.
[Don't forget to enter my giveaway, if you haven't yet, by being an official Follower and leaving a comment at my post of Friday, March 19th!]
Posted by Debra She Who Seeks at 05:57

This is so stinkin' adorable, and I'm not even a "cat person".

LOL... and what a gorgeous cat in that mug shot.

~oh madame zara your adventure goes on...poor little kitty heart broken and left next behind bars...may your time pass quickly and maybe you shall go back to dancin...swinging the old gypsy way...be well madame zara...brightest blessings~

Who'd have thought that by helping out a few people with accurate and marvelous tales of past and future that you would end up in jail? That poor, poor pussy...

Well, I must say Madame Zara looks purrrrfect in her gypsy regalia. Even though the law can be cruel, maybe she will be over this wanton life style and return as a domesticated feline, sigh...we can only hope.

Awwwww, poooor kitty!! It must have been a canine court. Is there anything we can do to help her pass the time? Purrhaps we can slip her some catnip inside some chicken nummies, or a file inside a tuna cake. How about the latest issue of Cat Fancy? They usually have a nice centerfold.

I know the life of a gypsy is very appealing, but it is terribly dangerous for a kitty cat who isn't alley savvy. I hope that she will reconsider her own future when she gets out and will return to the love and safety of your home!

They are just too cute. I love Madame Zara's getup.
Mary

Love the mugshot of Madame Zara in action! :o)

love those pictures..and the story..

Wait, does Texas really have a law like that?

So sorry to hear that Madame Zara had a run-in with the Austin PD. Years ago, there used to be a Psychic Cat that would set up near the LA Museum of Art. I know it was a Psychic Cat because it's human put up signs for it. I don't believe the police ever made an issue of it.

Sarita, I don't actually know if Texas outlaws fortune telling. Some jurisdictions still do. At one time (back in the 1960s and 70s) it was quite common. But now I suspect most jurisdictions allow it (or turn a blind eye to it) unless the person is running an obvious scam.

love the mug shot...great face on that cat...

"The other pussies are cute in a Caged Heat kind of way." I think I pulled something trying to hold in my beverage.

Definitely a felon. You can tell by the expression in her eyes.

Clearly Madame "Zara's" powers of foresight eluded her on this little escapade. However, I hear many psychics can't see the future coming, so she gets a pass. And with a mug shot like that, I suspect she'll be onto better things quicker than you can say "I want my extremely expensive cat food, please." After all, she is Zara.

They are only holding Madame Zara because she is so irrestible!! Prrrrwow. And I'll bet they are piping in a little ZZ-Top for her entertainment.

(there is no law against fortune-telling here... in fact, fortune-tellers are all over the place... there may even be one called "Madame Zara" (OK, I am speculating on that last part)

OMG - send her some Tender Vittles with a nail file! Poor Madame Zara!

But I am sure the remaining time will fly by - and remember that our thoughts are with you! Just watch out for those 'nip' selling cats on the inside....
We still L♥ve you Madame Z!

May the future bring better things!

Methinks Madame Zara doth protest too much. Everybody knows that cats are born felons; she's just mad because she got caught ;) She does have a point about ridiculous outdated laws though grrr.

Oh that Madame Zara does find herself in some terribly complicated situations. My sister read tarot for years in an underground shopping mall somewhere near Atlanta, Georgia...perhaps this might be a destination for Madame Z in the future...I wish her purrfect health and please remind her to take special care in regard to hygiene...I imaging flees and ticks are easily passed from feline to feline in such confined quarters.

My mom is from Texas, and when I told her about poor Madame Zora she said "Yep, that sounds like Texas!"