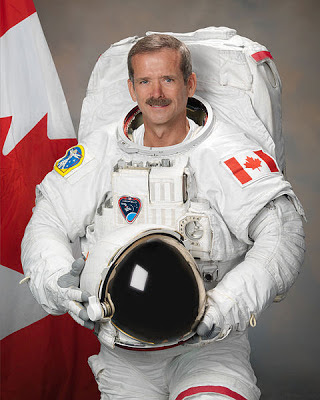 Hey, are you following Commander Chris Hadfield's twitter feed from space? He's the Canadian astronaut who arrived at the International Space Station on December 21st and has been regularly tweeting messages and photos since then. In March, he'll take command of the Space Station as the leader of Expedition 35, the first time a Canadian has been in charge. 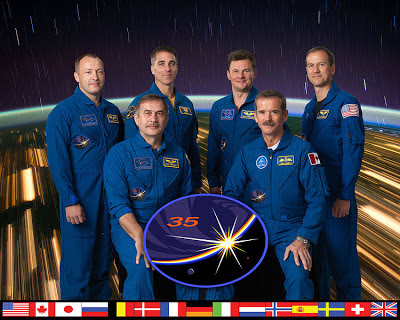 Anyway, Commander Hadfield has been tweeting these fabulous photos of various spots around the earth taken from his special vantage point on the Space Station, with special attention to Canadian sites. On January 3, he posted this shot of Edmonton! That's the North Saskatchewan River running through the city. 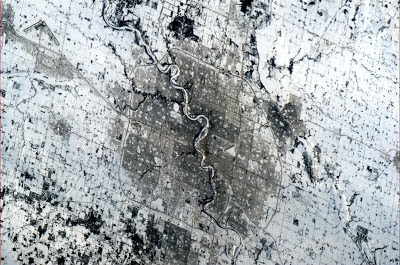 the first hunk on the left is rather cute. I've read about Hadfield's tweets even in our newspapers.... it's the main buzz today.

I think they're all kindof cute!!!

I'm not cool enough for twitter,ha!
I did see that image though, thanks for the story behind it. How cool is all of that?!

what will you Canadians be up to next, eh?

I've just been reading about him - talk about high achiever! It sounds fascinating.

Good for him! And Good for Canadians!

Nothing wrong with a guy in an astronaut suit...

That is really cool. I used to want to be an astronaut, but then I discovered I'm terrified of flying and I freak out in enclosed spaces. Probably not the best job choice for me. LOL

I'm so impressed. I know I am a horse and cart kinda girl, tee hee, but I think the twitter thing from space is aces. Now I have something else to obcess about....tweets from space. Love it.

Yes, I've heard of him! Yay for Canada!

Never did learn what Twitter is all about. Heck, I just learned how to do Facebook...and only because I like their games.
Mary

Now that is a good use of social media. And congratulations to Canada for this achievement!

That is so cool!! We need more space peoples...from all over the world!

i think i can see you, are you waving at me?

Oh thanks Debra! I added him right away. And as for Edmonton looking cold, I'd rather that than what the folks in Australia are facing. Give me winter over 40 degree heat!!!

Those are some spectacular photos!

I am totally geeking out. And Tweeting from space?! That is so Dr. Who!

Chris is one of my heroes. When he takes over he will fix up that little alien problem we have right quick. We don't play that shit in the Tundra.

Oh Canada! That is so cool!

I used to want to be an astronaut when I was little. Now, I just to keep my two feet planted on earth :)

That is just so cool!!! I want to live in space. With little green men. Or women. Maybe just women.

Amazing photos! Edmonton does look chilly, even from space!

I can't stop smirking at tweeting from space ;-)

Thank you for all the positivity! You made me smile!!
That was a cool post. It made me want to tweet!

Is it the people from Toronto or Montreal that are all angry at his support for his favorite hockey team?

Can't remember, though I have met Hadfield once. Was awesome.

So cold, so very cold. Tweeting from space, you can't get more awesome than that!

Is it just me, or does he have a really tiny head?

I had not heard of this, but I might have to follow him. This is very cool indeed.

I must live under a rock because I never knew,umm, eh. lol.( ooops, there goes my Canadian showing again)

Thank you for the support! This really bugged me!
Have a blessed day!

OK, Cool and the Gang....as in cold gang...sorry I digress....I am now Twittering along with everyone else looking at Edmonton! Ain't this cool, or cold whatever works!
Ron

Very cool! We have been following what they have been saying about Commander Chris Hadfield on the news!

Funny how a man can tweet from space yet when I try to tweet from my rural home it won't send.

I'm mesmerized by the shots of earth from up there..absolutely love them.

Canada is my second or third favorite country....

Thanks for commenting on my blog even though I have neglected
yours....I'll be a more behaved boy from now on. I deserve a spankin (hee hee)

Hm, someone I follow on Twitter has been tweeting about his tweets. I think it's Jill Barber. Anyway, so cool to think that he's in space and tweeting.