Last month when I was in Winnipeg, I went to the Manitoba Museum to see a special display -- three sets of Canadian war medals from World War I, all of which included the extremely rare Victoria Cross. In the British Imperial military honours system which applied to Canada in those days, the Victoria Cross was the highest decoration possible. It was given for "valour in the face of the enemy" and, by its very nature, was often a posthumous award. 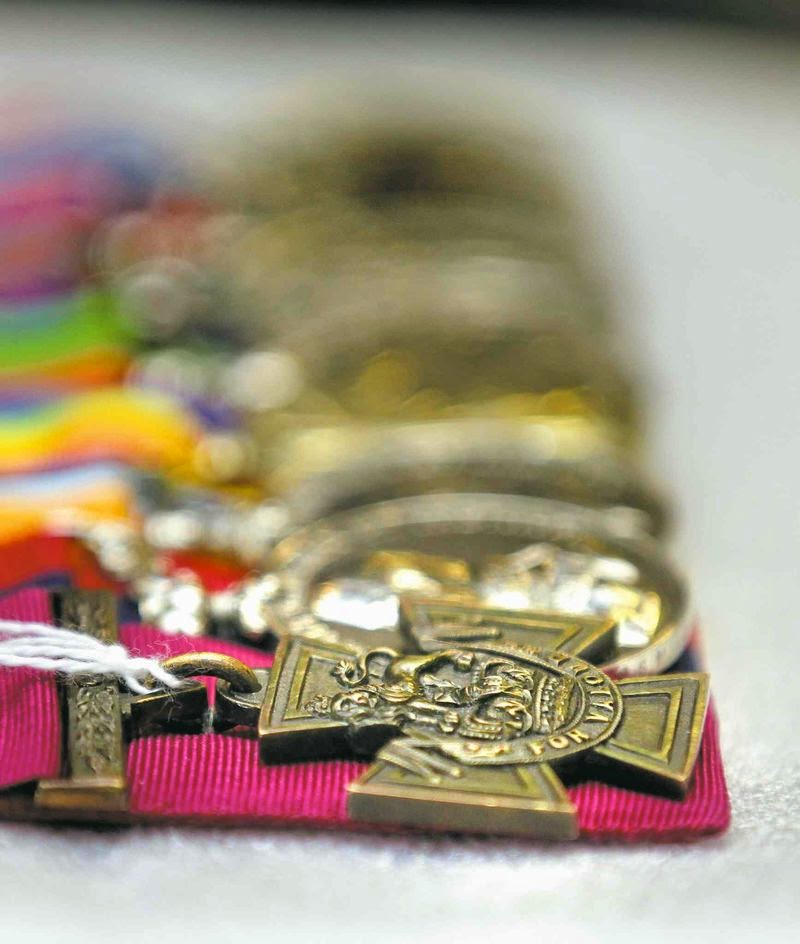 But what makes these Victoria Crosses unique in the world is the improbable coincidence that, before joining the Canadian Expeditionary Force, all three of these soldiers had lived within a block of each other on Pine Street in Winnipeg. What are the astronomical odds that a single city block would produce three VCs?

So shortly after World War I, Winnipeg honoured its "Pine Street boys" by renaming their home street "Valour Road." 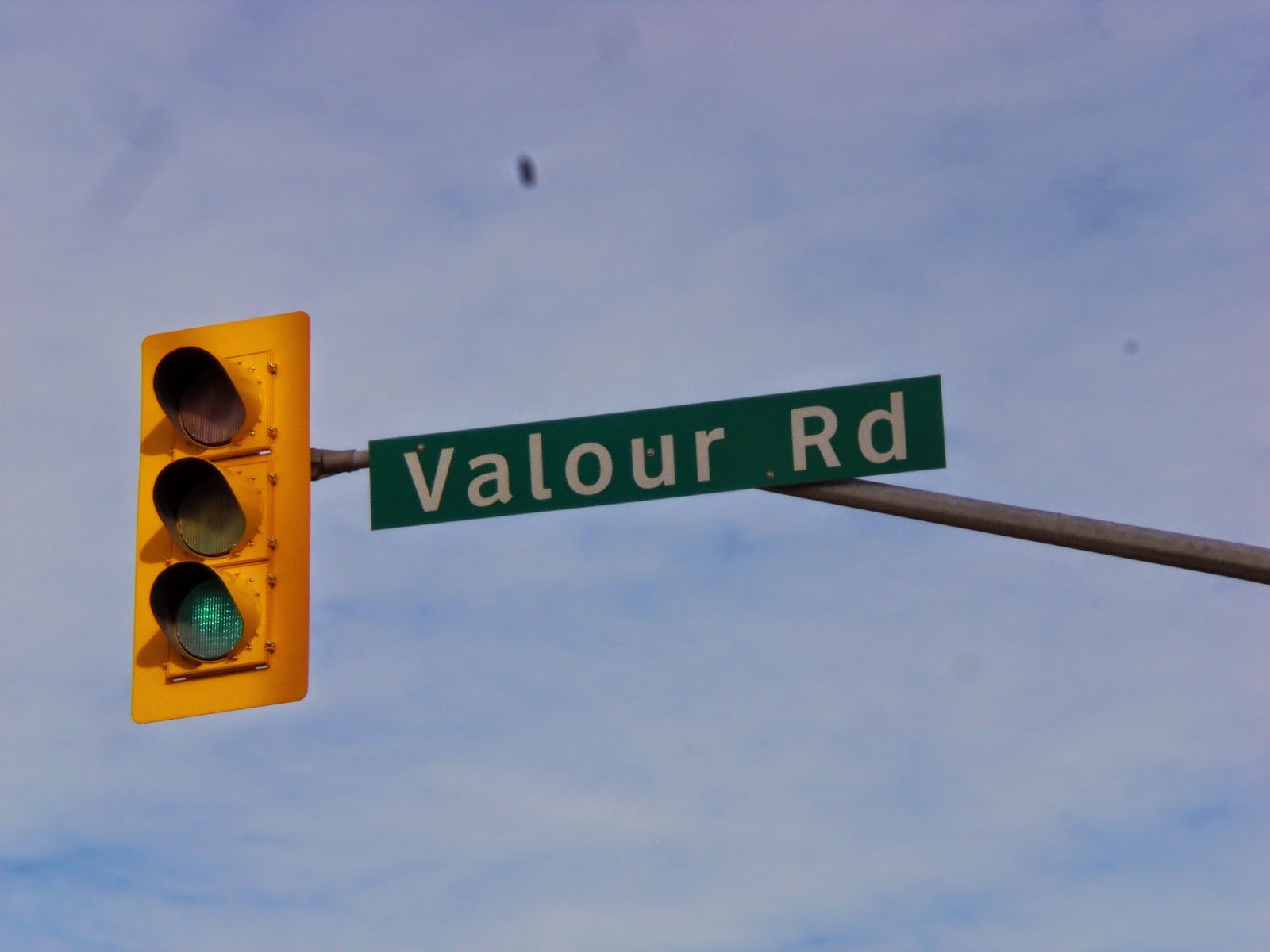 Today, Valour Road is marked with special signage to indicate the street's historical and military status. 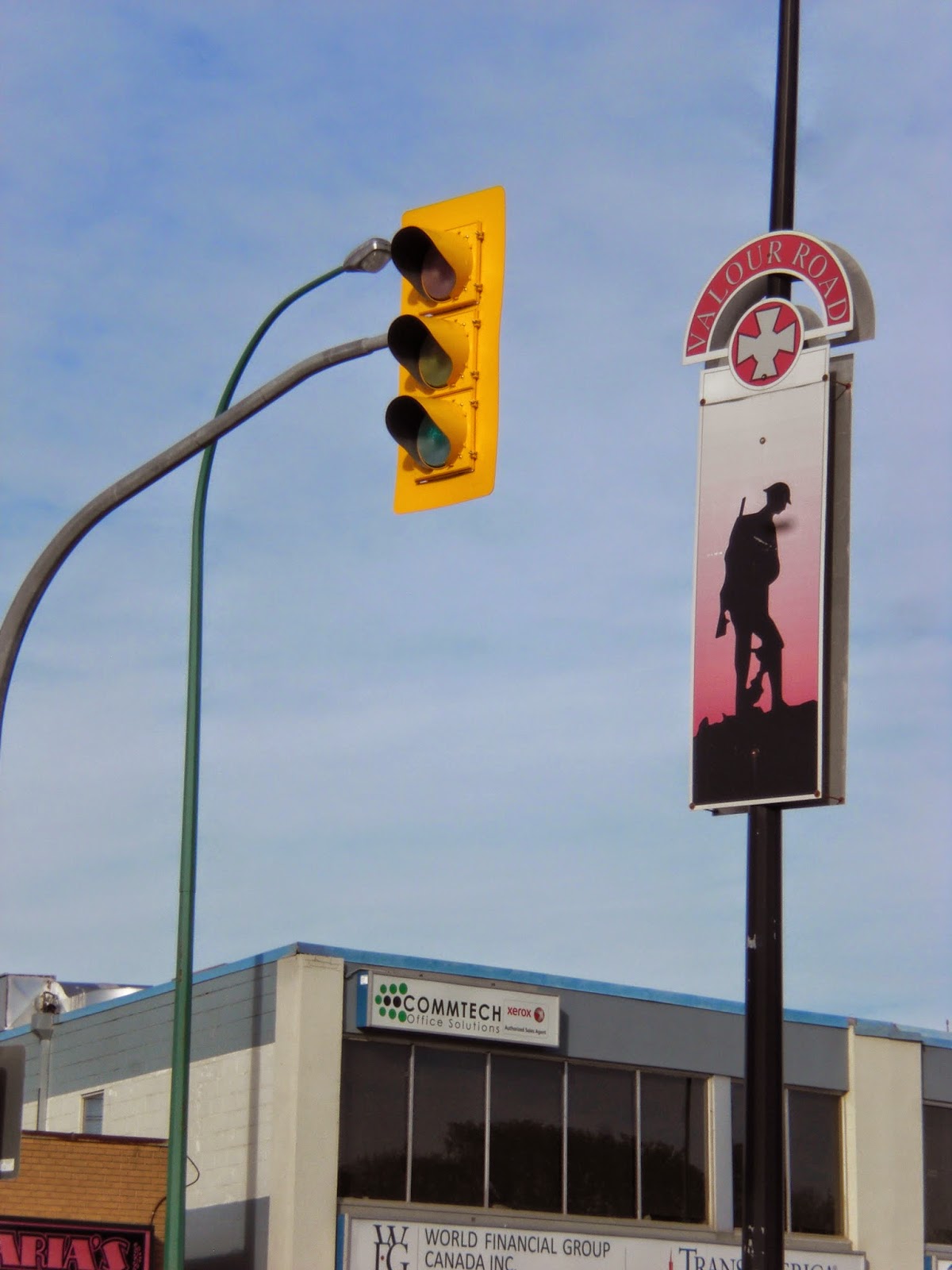 These large signs run up and down the length of the street. 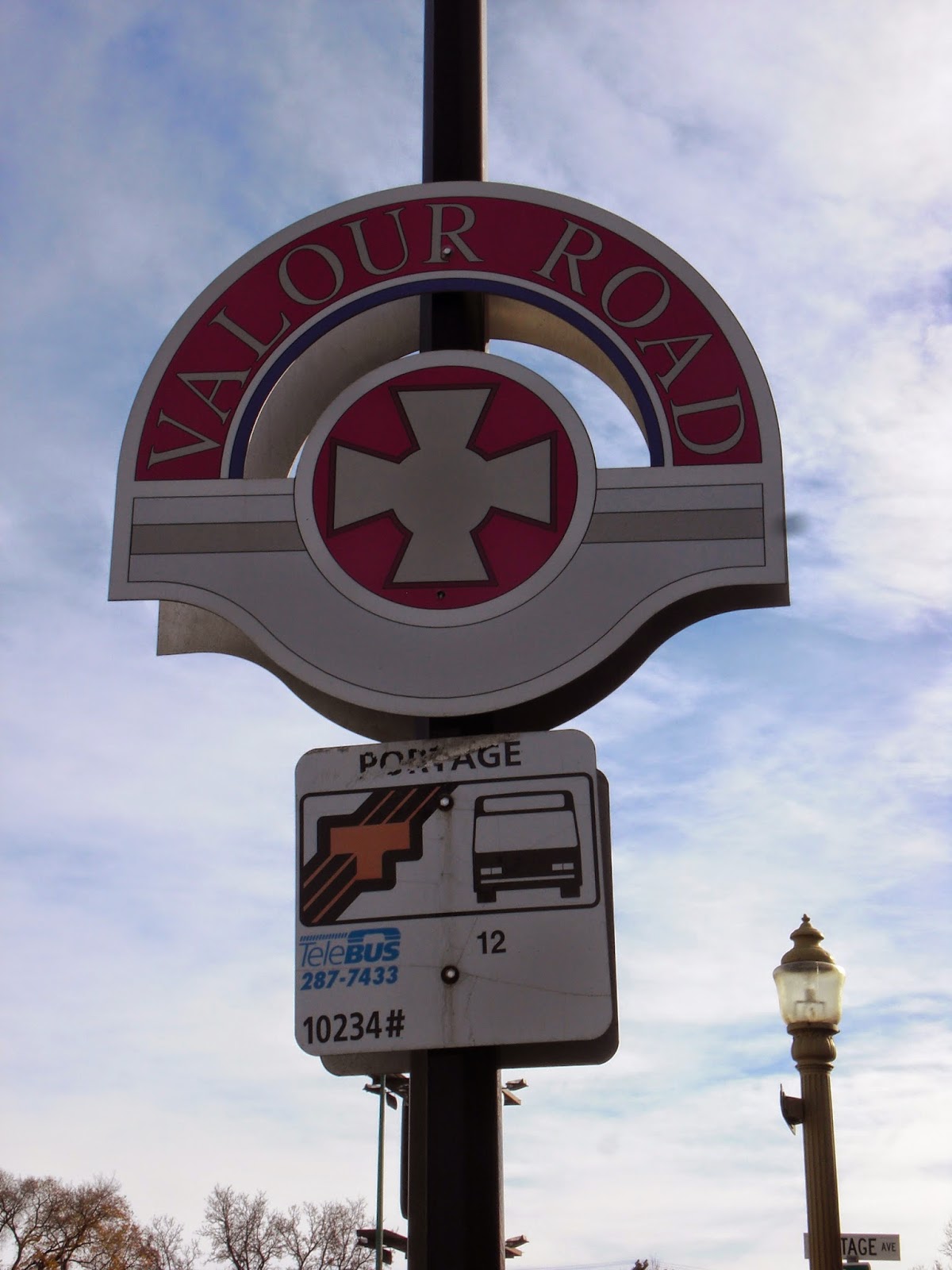 And at one intersection, behind a fringe of these same signs, there is a freestanding stone and metal memorial to Shankland, Hall and Clarke. 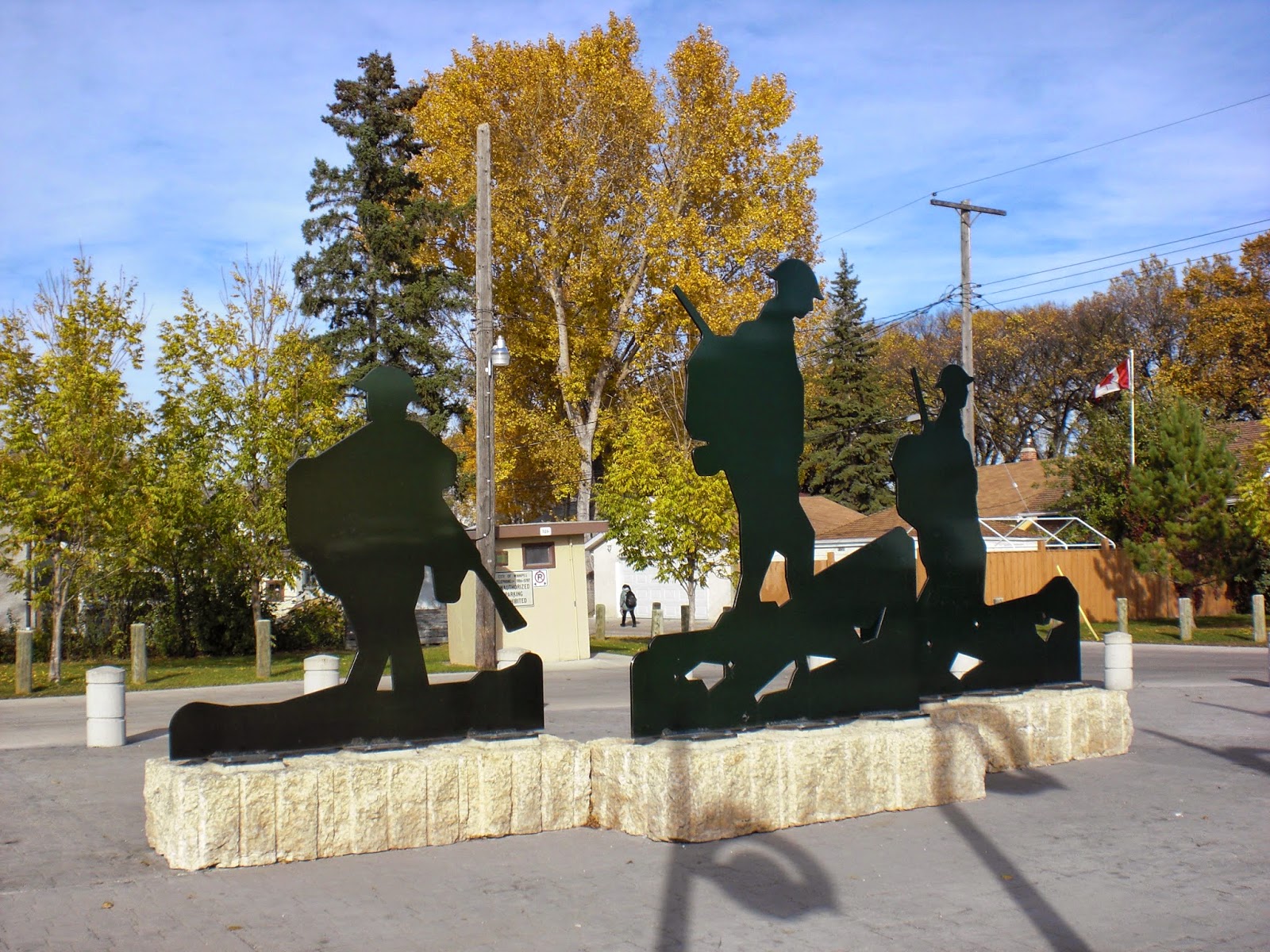 The three soldiers also appear on other signs that decorate the street. 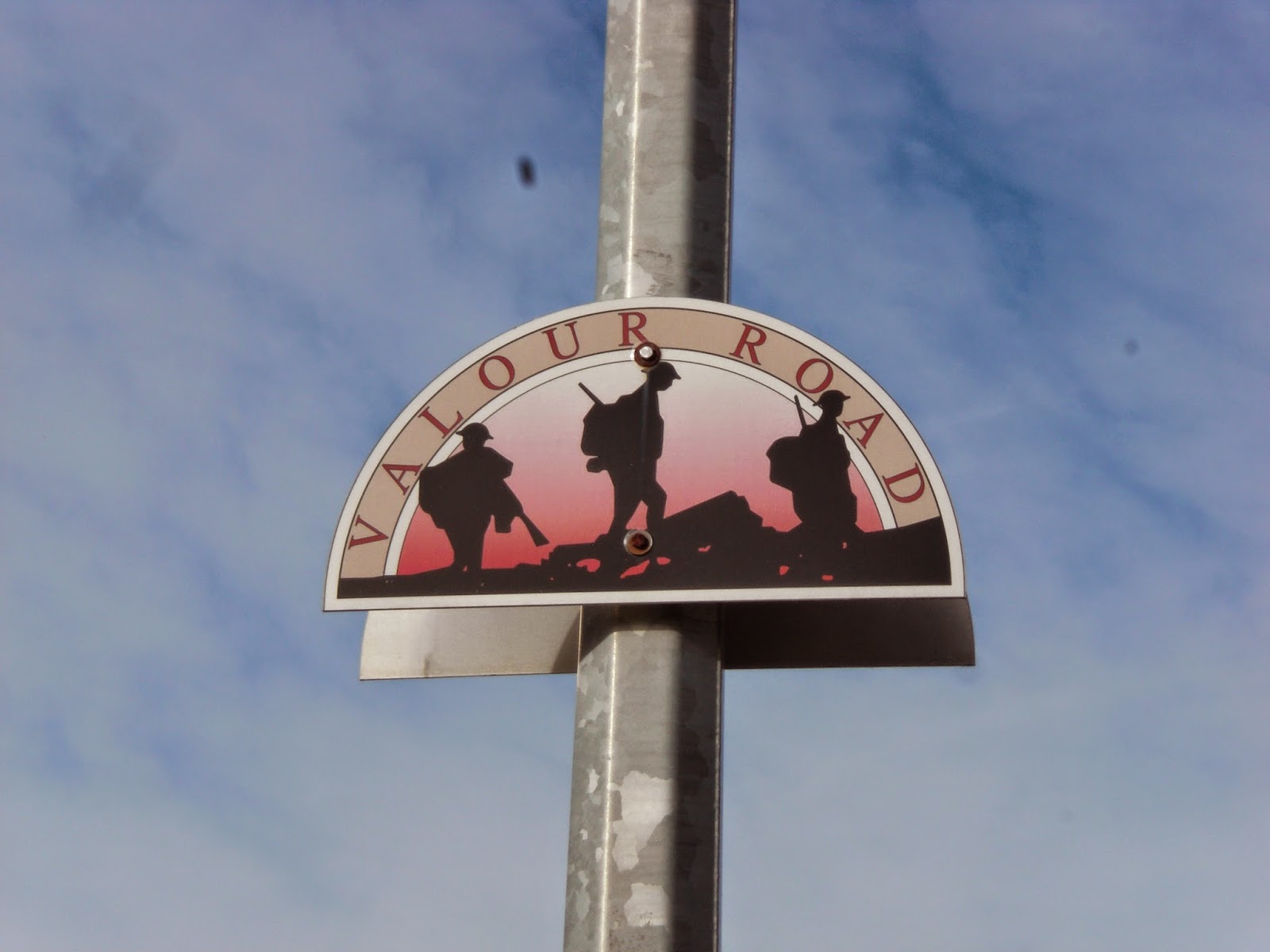 Their medals and VCs are part of the permanent collection of the Canadian War Museum in Ottawa. This special exhibit was loaned to the Manitoba Museum to mark the 100th anniversary of the start of World War I. The display will return to Ottawa after Remembrance Day.

[First photo by Phil Hossack, Winnipeg Free Press. All other photos by Debra She Who Seeks, October 2014]

That's an amazing story Debra! Thanks for sharing this! x

I'll be honest with you; I thought the purple cross was always a posthumous medal. I'm glad to hear there was someone who survived what it takes to get one. With three boys from the same block getting them I'd wonder what was wrong/right with the block. Sounds like there's something there that just produces valour in large quantities.

The three lived within a block of each other! That is remarkable. What a great way to spend the day. I love visiting museums.

What a cool coincidence!

Very serendipitous that they lives so close to one another :) Have a great weekend!

wish my country had more WW1 memorials, given the fact that we lost 1 million people out of 4 million in total.

that is the best thing I will read today,

Interesting.....Will have to research these 3 soldiers.
I really like how they renamed the street upon which the 3 lived. And I think it is beyond awesome how Canada pays tribute to her soldiers.
(p.s. is that a UFO in the 2nd photo?)

Oh Debra - quite a touching story! How uncanny all three lived so close. Thank you for sharing this!


A friend of mine named Mike Perry @
http://www.67notout.com. does synch and coincidence stories and would love to hear yours, I'm sure.

That's very odd indeed. Thanks for the info.

This is the first blog post I read this morning and it may have the most impact. It brought a little tear to my eye.
Thank you for sharing!

Thanks for sharing that little bit of history Deb..Very interesting..Nice tribute..

thanks Deb for your visit...Canada seems cool...

Thank you for sharing this, Debra. I did not know this story, but nothing about brave Canadians surprises me! I just watched the Stephen Colbert video you posted. Awesome! And then I got a good belly laugh from your Barroom Kitties. I think you made my day! I hope you're having a good one too!

What an amazing story. Thank you for sharing it with us.
Mary

Nice shots! I especially like the cross. Made me miss traveling.

Where I grew up, the World War I soldiers were all assigned to the same unit. The teeny little town where my mom was born sent 11 men to WWI, and they all died. It was devastating for the community, needless to say. The citizens put up a lavish WWI monument, way beyond what you would expect to see in a town that size. Valour Road reminded me of that.

What an incredible story. I am curious though...were they all in the same unit, or separate ones?

Hi jadedj -- they were all in different battalions, including the Cameron Highlanders and the Winnipeg Rifles. All of Canada's overseas troops together were called the Canadian Expeditionary Force.

Thank you so much for bringing my attention to your post - that's quite a story and love the idea of the road signs. Coincidences and synchronicity are all around us.
Best wishes,
Mike

I love learning new stuff from your blog!

What an honour it must be for the families and residents of Winnipeg, Debra! And you account of this is truly moving and a wonderful tribute to these three men. Thanks for enlightening me.

Yet another example of learning new stuff from blogs. Was there any information about them being friends too?

Hi Bill -- I don't know about that. Interesting question though!

Bill & Debra: that would very well be possible wouldn't it! It would be great if someone knows this.

Reg has mentioned this story to me often and I am glad they are being commemorated and that their medals are on display for people who live where they are from can come and see them.

Within a block? That's insane. Wow!

I love learning about this stuff. What a remarkable coincidence, though I don't often believe in coincidences. And I love those signs with the silhouetted soldiers. Very striking.

Wow, that IS an amazing coincidence! I wonder if they had an especially inspiring teacher in school or something. What a great story!

Debra.....nice bit of history you have shared with us today.

A current affairs program in Australia recently aired a story which had actual footage of the Victoria Cross being earned by an Aussie soldier. It's the first time something like that's ever been caught on camera. I haven't seen it yet, but I think I will today. Here's the link.

I like stories of valour. I admire veterans for what they have fought for and survived for. Your story is inspiring.

Michael, thanks so much for that link -- it's a fantastic news story with amazing footage! I encourage everyone to cut and paste the url into your browser, take 20 minutes out of your life and watch it! Awesome.

Oh my God, I love this, Debra!
I am so glad that the folks in charge of things at the time had the great good sense to honour these men.
Thank you for sharing this, I would never have known otherwise.

What a neat story! Thank you for sharing it.

What a wonderful blog full of information! I would really like to visit that street some day!

Wow, I never knew anything about this! Thanks for sharing this history Debra ;o)