I adore, SIMPLY ADORE, drag queens. So last night I was glued to the TV watching the Season 7 Grand Finale of RuPaul's Drag Race -- WHO would be crowned as America's Next Drag Superstar?

And not all that terribly surprisingly, the winner was Violet Chachki, who wowed the judges earlier this season with a spectacular reversible runway outfit . . .

. . . and that ultra-cinched waist! Ouch, it hurt just to look at her!

Violet is very young -- just turning 23 -- and quite rightly says she is the "past, present and future of drag." Cutting edge is her specialty and she's outstanding at it!

My fave in the race, however, was Ginger Minj -- I do like a sweet, sassy and sexy big girl! She couldn't match Violet for fashion but, in my opinion, was clearly superior in the acting, lip-syncing and comedy departments. She was the only one of the Top Three to get a celebrity endorsement for her campaign -- from John Waters! And if the man who brought Divine to the Big Screen doesn't know superstar drag queen quality, then I don't know who does!

My two other favourite queens were: 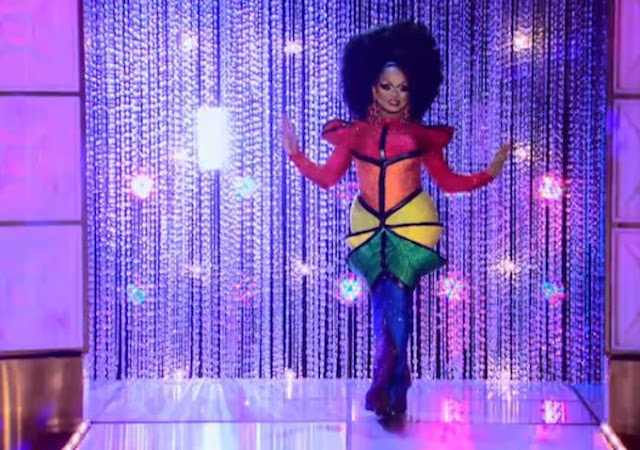 The sheer audacity of that outfit's over-the-top rainbow kitschiness quite rightly inspired internet fanart. A Legend is Born! 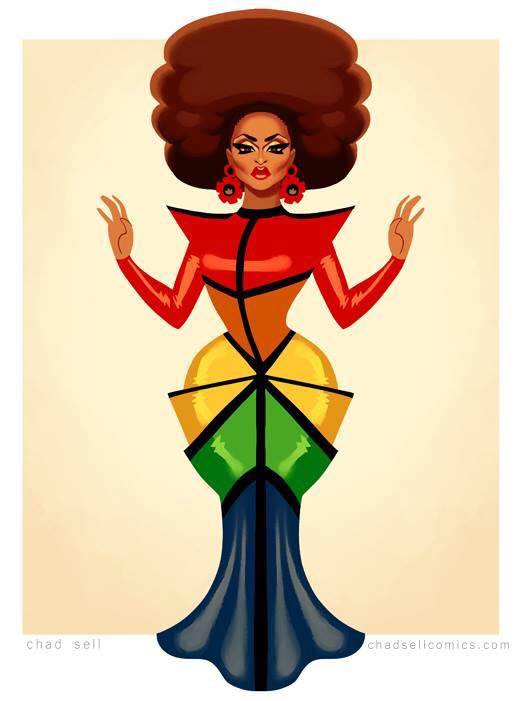 And my other fave was dear prudish Max, she of the classy elocution skills, because, well, I just have always had a thing for silvery grey hair. I don't know if that qualifies as a fetish or not. 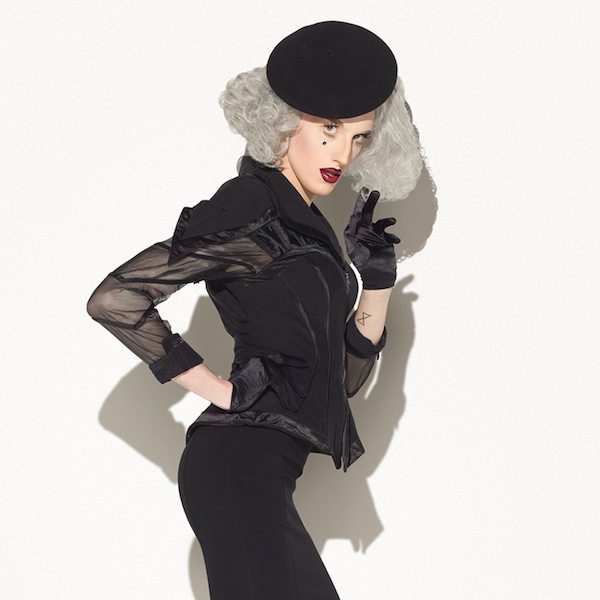 Dear gawds and polliwogs, that corset!

I don't think having a thing for silvery grey hair qualifies as a fetish any more than preferring blondes counts as a fetish. Maybe a preference. I love drag queens too, but only the singing and performing drag queens, I don't really dig the lip synching drag queens. I mean, lip synching? Snooze. Karaoke at least. Drag Queen names are the best. Violet Chachki is brilliant, it bums me out that there are famous people with boring names like, Drake. Drag Queen names should be the minimum standard style of name to gain entrance to Fame Town.

grey hair is really trendy among the young girls too currently. They will dye it grey... so weird...

Personally I prefer Drag Kings, all that lipstick, feathers and girly stuff I find hard to cope with! Ha.

I didn't watch it, but I can tell from your gifs I'd have liked Ginger best too. How can you beat neat, petite and ready to eat! LOL

That corset! Numb from the waist down is right. Wow!

amazing! and that waist,, wow, how was that possible lol!!! I think my fav is Ginger!

Ginger would have me in stitches! I love clever honour! Max is more like me ( well if I was rich and could be ME!) such an engaging group!
In my life I have had the privilege of like minded company, memories I will cherish! xo

Ginger is my favorite too, and I like to strive for appearing "neat, petite, and ready to eat."

I'm pissed, I don't get this show..and I looooove Ru Paul..

They're so pretty! I've never watched Ru Paul, but I really would like to. I wonder if the older seasons are on Netflix..

I love corsets. That was sooo cute but way too tight at the waist.

It hurts just thinking about how she got her waist that tiny. She's beautiful and stylish there's no doubt about it.

I'm partial to the big girls though and always have been. They always seem to be better on stage and easier to talk to as well.

Oh my....what memories this brings back. Years and years ago I went to my one and only Drag Queen show. My first husband and I have several gay friends and the took us to see this. I will NEVER forget the amazing talent we saw ........ and THE OUTFITS......took my breath away.
I love trips down memory land dear Debra.

Nice post Deb, you should dabble in drag more. I am not happy Violet won. I mean she is pretty, and has fabulous ensembles, but I feel no humor, not a good dancer, not much warmth,and can't act. What does she plan on doing at a show? Stand and pose? No, Ginger really should have be given the privilege.

Favorite Young Man loves John Waters--in a heterosexual way. I gave him one of Waters' books for his birthday. I adore that reversible outfit.

That looks like a fun show! I should probably catch an episode of it some time.

We were GLUED to the TV as well, Debra!! As we have been for all 7 seasons!!
I think Ru picked the best one in Violet. She is strong in all facets of drag.
Love this show!

I am so behind the times, I didn't even know this show was out, but then I don't have cable or basic TV in the house. Will have to youtube it to see the fun.

I did not know there was a Ru Paul's Drag Race. Bet your sweet ass I am going to look that up on the inter-U- tube.
the Ol'Buzzard