Over the Labour Day weekend, my theatre buddy and I went to the Shaw Festival at Niagara-on-the-Lake, Ontario. This annual event is designed to celebrate the plays and legacy of the great Irish playwright, George Bernard Shaw (1856-1950). 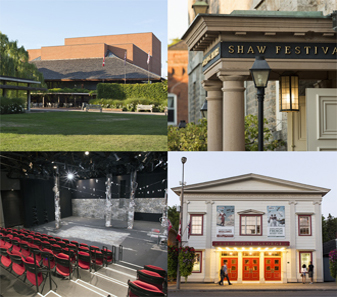 We took in two of Shaw's plays. Pygmalion, which of course later served as the inspiration for the musical My Fair Lady, was in this production set in modern-day London rather than in Victorian times. So no more evening clothes and top hat for Professor Higgins -- imagine him instead in shorts, t-shirt and a bicycle helmet! Eliza Doolittle's famous swear word was also updated to more suitably shock a contemporary audience, LOL! 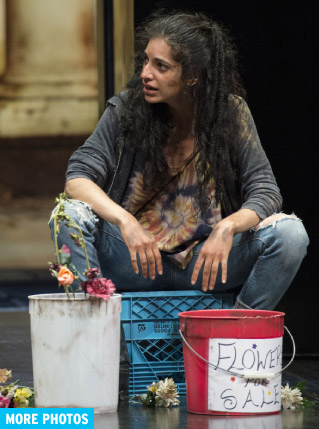 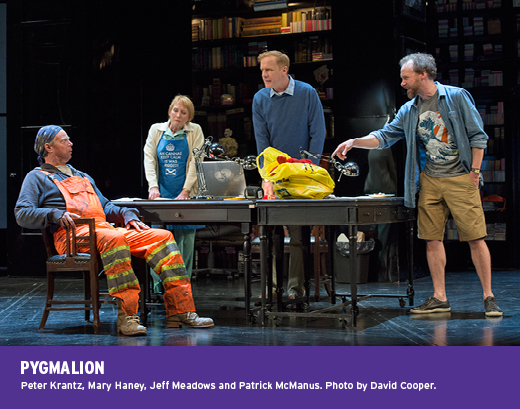 The other Shaw play we attended was You Never Can Tell. Look at that sumptuous set and extravagant costumes! These distractions offset the fact that the play's feminist attitudes (so radical and shocking in Victorian times) are today absolutely mainstream and ho-hum. Nothing outrageous anymore about this play! 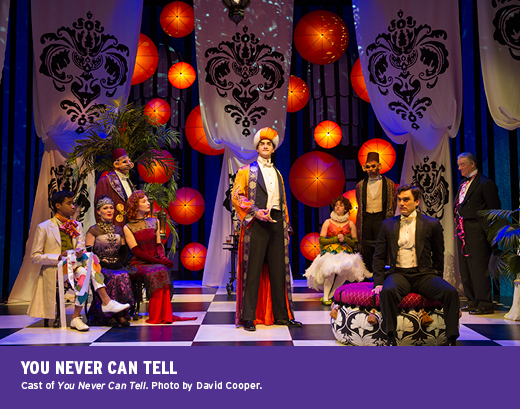 The Shaw Festival also stages plays by other playwrights who were contemporaries of Shaw. We went to The Lady from the Sea by Henrik Ibsen. Not surprisingly, it was about an unhappy wife trapped in a stultifying marriage, as were so many of his plays. 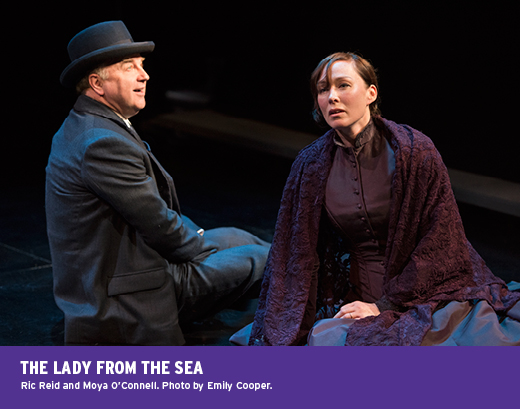 And we also went to a very enjoyable and atmospheric Kurt Weill musical cabaret called The Next Whisky Bar. Oh, so many sailors, pimps and prostitutes!

Modern playwrights who deal with themes that were close to Shaw's heart also get staged at the Shaw Festival. We really enjoyed seeing Tony Kushner's play The Intelligent Homosexual's Guide to Capitalism and Socialism with a Key to the Scriptures. It was four hours of radical politics, queer sensibilities, lingering religiosity and family dysfunction. Good times! 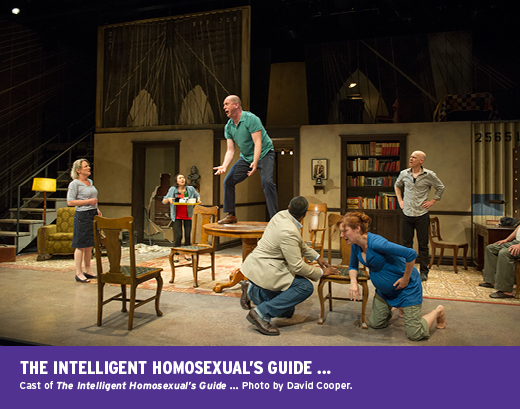 George Bernard Shaw was most decidedly not a fan of the famous actress Sarah Bernhardt, who figures prominently in Canadian playwright Michel Marc Bouchard's new play The Divine. A 1905 tour appearance in Quebec City brought The Divine Sarah into conflict with the rigid Roman Catholic Church. 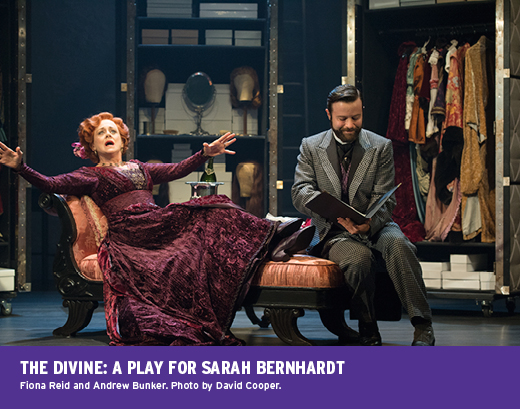 The scenes alternate between a Catholic seminary, Bernhardt's dressing room and a shoe factory employing child labour. The seminary is pictured below -- and if that set doesn't strike a chill in your heart, I don't know what will. 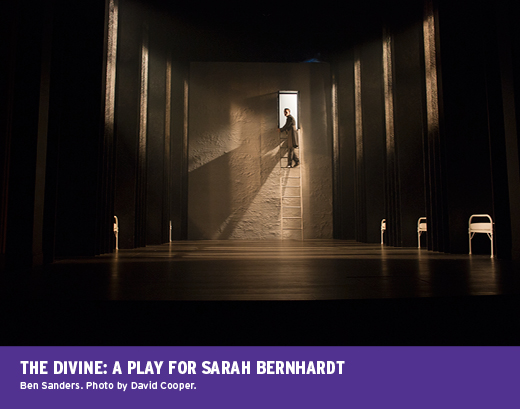 All in all, some great plays and an enjoyable visit to one of Canada's pre-eminent theatre festivals!

Delightful!!! I'd almost hop a plane and travel far to experience..well almost!

my blog friend dr. spo (sporeflections.wordpress.com) has attended this festival numerous times; he lives in AZ.

That sounds like a really good time, and a great way to honour Shaw. It's pretty awesome an Irish playwright is being given a festival all the way up in Canadia. I'm not a big fan of modernisations of plays though. The "modern" version of Romeo and Juliet where they still used the original script really ruined that for me.

Sounds like you had an awesome time. So much interesting things happen in your neck of the woods.
Mary

I don't like it when they transfer classics into modern times. And lovely sets in that last one!

what an amazing line up!
thats a summer to remember for sure,

Still don't know how you managed to keep them all separate in your memory! But they look and sound wonderful!

I'm ashamed to say that I've never been to the Shaw Festival, despite having lived in southern Ontario most of my life. Looks like it was wonderful fun!

I don't mind when classics get made modern for the most part. But if we're talking changing Wonder Woman's boots from red to blue, then I mind.

As a lover of live theater (that sounds like I make love to live theater but you know what I mean) I am jealous. What an amazing festival. I'm pretty sure, however, when you say that Pygmalion is the "inspiration for the musical My Fair Lady" you mean that it's the inspiration for the instant classic, She's All That. That last set, for The Divine looks amazing.

i always loved going there!

How fun! The second play with the costumes and setting looks especially gorgeous!

Your adventures into the theater make me a little jelly. I love live theater. What a lovely way to spend your time. Lucky you. xoxo Oma Linda

Watching live theater is so much fun. David gets bored by it, but I love it. Interesting choice of plays that were presented.

The festival sounds fantastic! Live theater is way better than than the movies. As a My Fair Lady fan, I would love that version of Pygmalion!

Normally, I'd say "No way!" to a four hour play. That one, though, sounds packed with awesome.

I'm not sure I would have been able to sit through so many plays all in one stretch, but the sets of 'You Never Can Tell' are very pretty :)

Wow that sounds fantastic!!! What an adventure! So many plays!!!

My brother and SiL who live in Mississauga always go to the Niagara-on-the-Lake festivals, and rave about them too.

Sounds like such a terrific time! What a wonderful way to spend the weekend.

couldn't sit thru anything that was 4 hours long unless they were playing football.

and I don't mean soccer..hahahha

I really need to see more plays. There's Moby Dick showing at the TNM in Montreal.

All sounds and looks very posh. I'm glad you had such a good time!

I'm going to have nightmares about that seminary.

Sounds like a lot of fun! and very engaging.. glad you enjoyed

Theatre moves us all forward. I miss it.

The thought of Professor Higgins in shorts made me giggle. I would love to see it.

Oh, did I tell you that I recently saw Jesus wearing a Superman tank top and skinny jeans? It was a glorious musical. ;-)

I recall the "Shaw Festival" from it's early days when my dad (Alan Nunn) acted there ...
Wow that one set it stunningly, bleak isn't it.