'Murica isn't the only country with right-wing, anti-government rednecks who can't spell, y'know. We've got our fair share in Canada too, especially here in Alberta. And man, have they ever been worked up since the global price of oil tanked, our Canadian dollar plummeted, and a moderately left-wing NDP government got elected in our province! 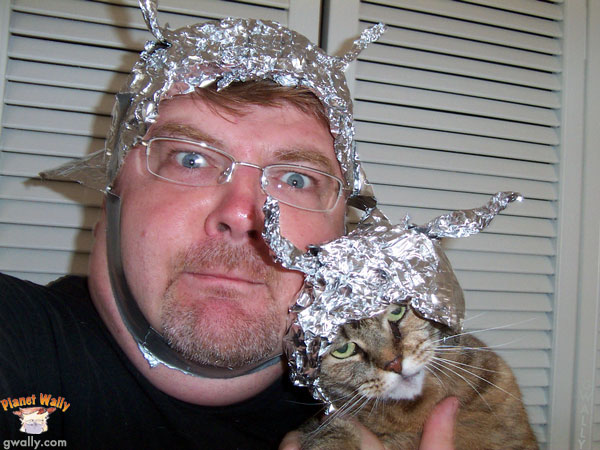 On Twitter, one of our home-grown rednecks indulged in some typically overblown rhetoric and called for a coup d'état against our NDP government. Unfortunately, despite living in an officially bilingual French/English country, the tweeter had no clue how to actually spell this French term, so he just spelled it phonetically as kudatah! 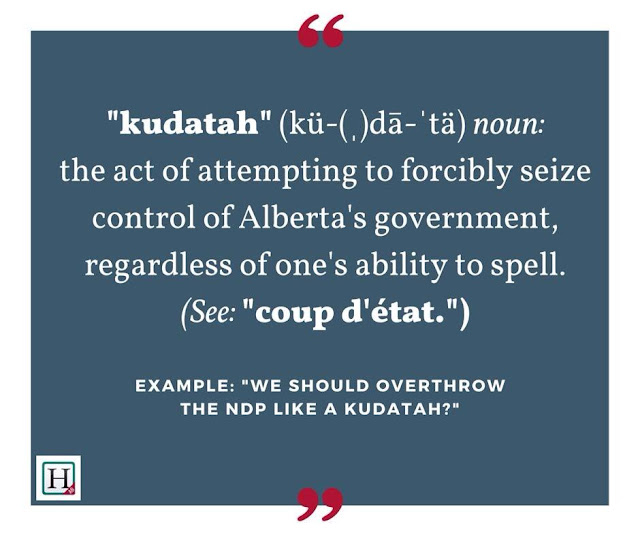 Well, of course, this has set off a veritable firestorm of mockery and satire that Canadians have all been enjoying tremendously! 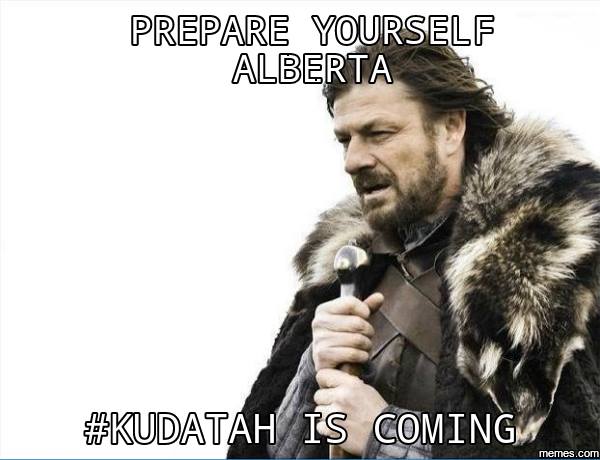 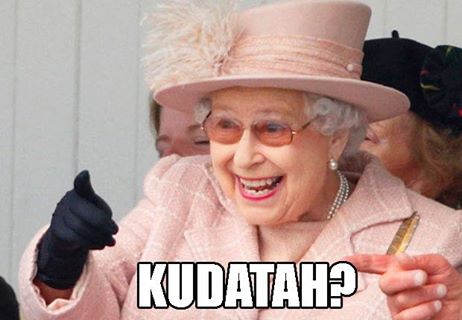 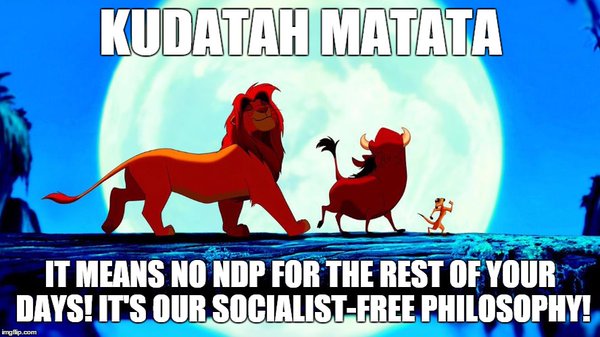 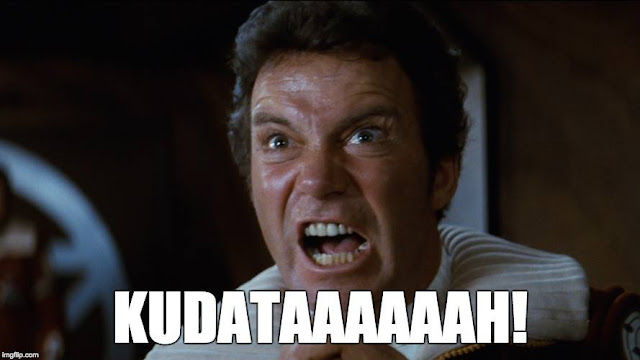 Now, I've laughed at this silliness as much as the next person, but I do feel a wee twinge of sympathy for the unfortunate tweeter at the centre of it. In all fairness and in his defence, I must point out that:

(1) he deserves props for even knowing the term coup d'état;

(2) he did use the term properly according to its correct meaning; and

(3) his phonetic rendering does accurately convey how coup d'état is actually pronounced.

Surely Canadians can cut this poor bugger some slack, just like we do for Ricky of the Trailer Park Boys who is, after all, a friggin' Canadian icon because of his (shall we say) creative language and spelling skills . . . . 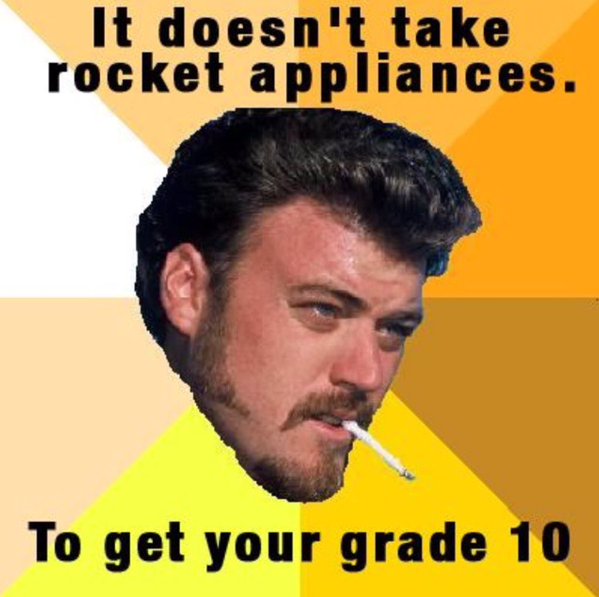 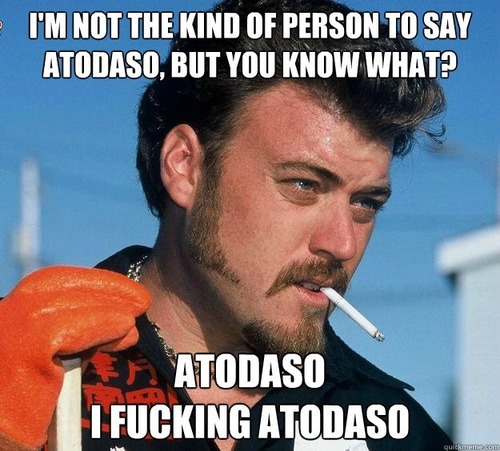 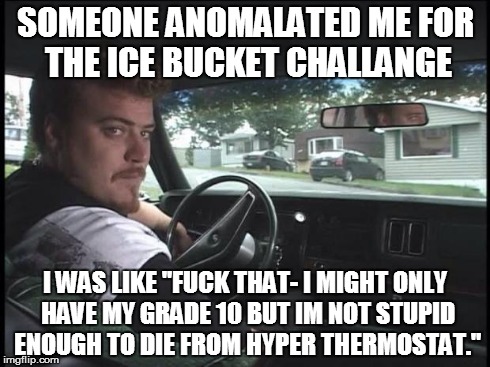 And hey, you know what? Now that the cat's out of the bag, everyone is welcome to come to Alberta for the big event! Mark your calendars, kids! 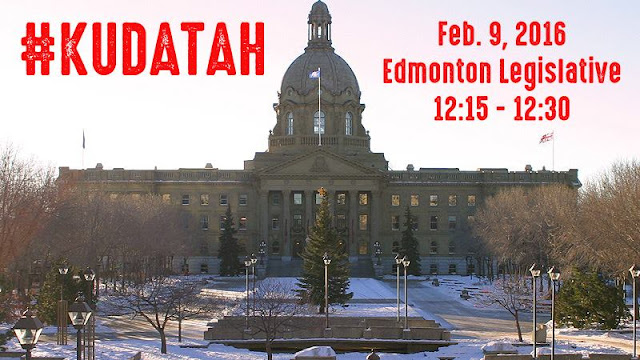 I am sorry to hear canada has been infected with teh stoopid. can you PLEASE take justin bieber and ted cruz back into teh stoopid group?

have a good weekend!

Wait, DID he write it phonetically? I would have gone with "coodaytah". Then again, I'm not a feverish anti-government wing nut. Some of the responses, like yours, have been hilarious. "@diesellibrarian
I hate to admit it, but #kudatah does have a certain genehsaykwah." That's good stuff.

Lol. However I wouldn't want to be a part of any armed resurrection.

there are stupid people everywhere... they're probably in majority, actually

Anne marie said it better than I could!

(bows deeply to all in thanks)

there's something kinda catchy about the spelling - Kudatah.

I laughed so hard at this but you are right, we should cut this poor bugger some slack and move on. It's all "water under the fridge" now :)

We should corner all of these numbskulls and finish them off with the kudagross.

Oh My Goddess!! I thought only Merica was infiltrated with nimrods like the GOP, Annthrax Coulter and Tea Bastids. Bless them all for their stoopid.

p.s. My spell check just said to hell with it and didn't even bother with kudatah.

I'm jealous I think your rebels are much more creative than ours.

Poor guy but I just might adopt the word, it has a special thud about it.

If Donald Trump wins the presidential race, you Alberta people might be very happy (by comparison) with what you're stuck with.

Hopefully, you will open your borders to the American refugees.

Someone posted on FB yesterday the meme, ""How Stupid Can You Get" is not a challenge!"

I'm thinking of renting a snack truck and showing up with my menu as follows:

We will also offer free rides to and from the event from southern Alberta. Careful boys, don't fall off!

This is so funny! And the 15 minutes? Hilarious!

The price of oil fell? Damn socialists, oh wait that was that free market thing.

Anti-government weirdos have no logic and reason. I've had agruments and clearly pointed out flaws in a free market (like many depressions in the 19th century) and they always blame "the government".

We will trade Ted Cruz for Justin.

By all means it is not a brag, but your rednecks are sophisticated compared to the gun toting, Fox News educated, morons here in the U.S.
the Ol'Buzzard

our redneck right wingers would want to shoot him for speaking another language..

And that? Is exactly why I don't Tweet. I would make some bonehead mistake like that.
I'm somewhat soothed to know that Canada also has plenty of "right-wing, anti-government rednecks."

Poor guy! I hope all this attention doesn't go to his head!
Oh, and Ricky went to our local high (in real life). What does THAT say?! lol
One of your best, Debra!!

I remember that in lion King..The guy in the first picture is probably receiving lots of signals from who knows where..Hope you are having a bang up weekend..

I probably shouldn't be laughing at this as hard as I'm still laughing... but I can't help it, lol!

LOL! Got my calendar marked for February 9th! I'll make sure I'm very far south of Edmonton. Wouldn't want to get caught up in a Kudatah! Have a good one, Debra!

Good luck up there! I thought our country had entertaining happenings right now but your country may be beating us!

Guess you could send him down here so he could find the sign that advertised help with learning - it said "tudoring" and had a phone number underneath. Not sure if they got the phone number right, if they wanted to become a royal or if they were just plain stoopid. Of course we have more than our share of stoopids in Oregon - destroying government property - asking for snacks but made sure they brought their beard grooming kits - and now trying to set up a new city government because they don't like the one in Burns, Oregon, and getting mad because the police chief won't let them use private property without paying for it to set up said government. Go figure.

I think their buddies are shacking up together down here, like JoAnn said! What's infuriating is that they aren't even FROM here.

Happily, they're being mailed sex toys (eg, go fuck yourselves) and candy penises (eat a bag of dicks.) Which they may have to do, if they can't run out for snacks.

I think I'd rather have someone spell it phonetically than try and pronounce it "Coop De Tat". French is a weird language, that tries to claim English is. Apparently the correct pronunciation of "Coup D'Gras" (likely spelled that wrong) IS "Coo De Grass", and "Coo De Gra" actually means "Strike of grease" rather than "Strike of mercy".

Thanks for coming by and leaving sweet words...I always like seeing that you've visited.

Politics can sure be lots of fun, eh?

LOL! I can't believe how bad our dollar is right now! And, the global price of oil tanking! Not good! Crappola! NDP!!!! Ugggg! LOL! Kudatah!! LOL!

Aside from the problems that Canada is having, this post was freaking funny! That poor Tweeter.

One of my favorite things to do lately is to read comments posted through social media on news websites. I mean, none of us are geniuses but when that squiggly line appears under whatever word you are typing, look that shit up so you don't look like an asshat!
Yet, people NEVER do and it provides me with hours of endless reading and entertainment value!

Thanks for reminding me that I have yet to complete that ice bucket challenge.