The First Women in Canada to Get the Vote 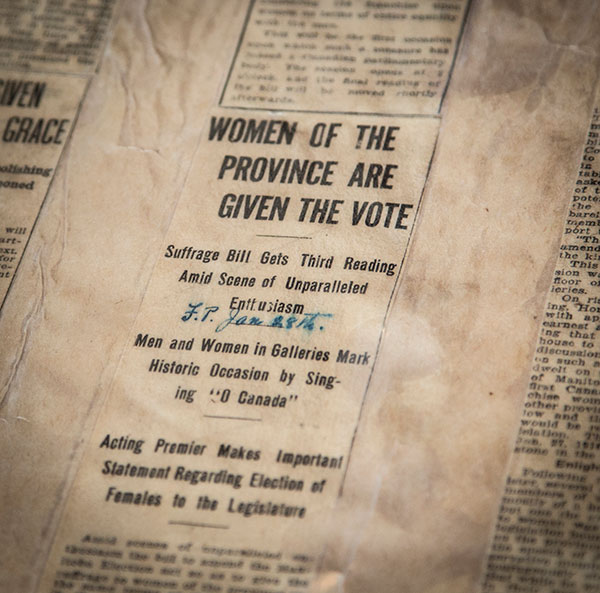 One hundred years ago today on January 28, 1916, women in my home province of Manitoba became the first in Canada to obtain the right to vote. I like knowing that my grandmother and great-grandmother were legally enfranchised on this date. No longer were Manitoba women classified along with "children, idiots and criminals" as legally incompetent to exercise the central right of citizenship -- the right to vote. 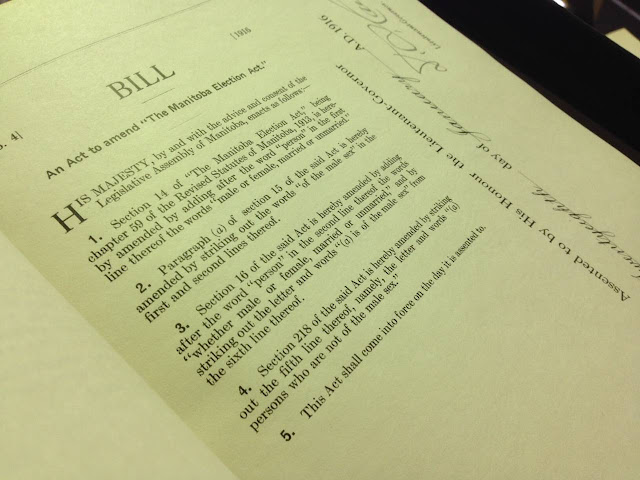 Led by the Political Equality League of Manitoba, a long campaign for female suffrage had been waged throughout the province. But unlike the violence of the British suffrage movement, the vote in Manitoba was won through peaceful means -- pamphlets, lobbying, petitions, public debates and satirical mocking of anti-suffrage arguments. 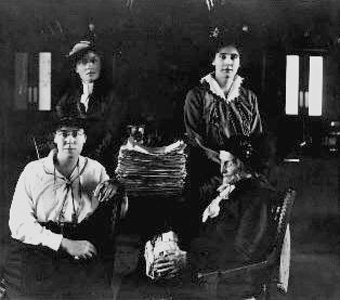 The long-time Conservative premier of Manitoba, Sir Rodmond Roblin, consistently refused to enact female suffrage, saying it was supported only "by short-haired women and long-haired men." Homophobic slurs have a long history in the fight against feminists and their allies! But once Premier Roblin was turfed from office in a corruption scandal, his Liberal successor Premier Norris promised to enact votes for women if a petition with 20,000 signatures could be produced. The Political Equality League presented him with a petition of 40,000 names and the deed was done. 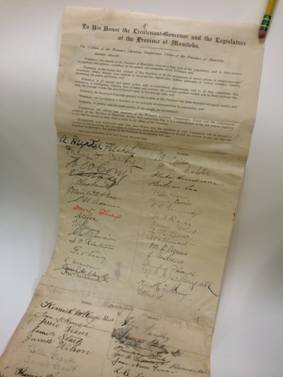 One of the most prominent members of the Political Equality League of Manitoba was Nellie McClung, a popular author of the time. She later moved to Alberta and became one of the "Famous Five" group of women who successfully sued to have women recognized as "persons" under Canadian law, equal to men.

Saskatchewan and Alberta followed close behind Manitoba in extending suffrage in 1916. It is thought that the prairie provinces were more open to the idea because men understood perfectly well the central role that pioneer women had played in homesteading and settling the west. It was harder to portray women as too inherently weak to engage in society's issues.

Canadian women obtained full voting rights in federal elections in 1918. Quebec women had to wait the longest for the right to vote -- until 1940 -- because of the conservative Catholic Church's unyielding grip on Quebec society.

First Nations women and men could vote only if they legally surrendered their treaty status and rights under the federal Indian Act. This fundamentally unjust condition was not removed until 1960.

And what about "children, idiots and criminals," the other categories of people who were all forbidden to vote a hundred years ago? Following the 1982 enactment of the Canadian Charter of Rights and Freedoms, our courts recognized the voting rights of people living in mental institutions in 1988 and of prisoners in penitentiaries in 2002. So today, only children under the age of majority still remain on the list of those citizens who are legally disentitled to vote.

Labels: I Am Woman Hear Me Roar, My Winnipeg, O Canada

Love your choice of the word "enfranchised." I wish I could say I was shocked that Quebec took so long, but really, I'm more shocked that Manitoba, Saskatchewan, etc. got it done in 1916. "Get things done and let them howl," indeed.

Whoa, Nellie. She was really something. Those hardy prairie showed the rest of them how to do it. Love this post. Thank you for the reminder.

It's strange to think it was only 100 years ago, and even less in some places, that women got to vote. I think it has made women more serious about their voting though. They understand how precious a vote is and how far it goes. I wish more people did.

if they took away the right to vote from "idiots" down here, the GOP would lose its base! (hee hee hee)

Jeez - not until 1940?? I've always wondered about that region, which always sounds so conservative and religious in there attitudes.

Yes, Ms Misantropia, Quebec was extremely conservative until the 1960s when it threw off the shackles of the Catholic Church. Since then, as a secular society, it has become very modern and progressive.

Heard Nellie McClung's granddaughter on CBC this morning! Would loved to have met her, she sounds as if she was outrageously wonderful!! Thank-you, Manitoba and Nellie McClung!

What a great post! I love these historical reviews. I especially love this one since it details one step in the dismantling of the patriarchy. Yay for the power of pioneer women - I'm sure your grandmother and great-grandmother's names can be found on that petition.

And, oh, the power of satirical mocking!

I've seen praises on your new Canadian government in which the right people have actually been put on positions in their expert fields. Bravo!

This is the best post of the day! "Never retract, never explain, never apologize – get the thing done and let them howl!" What a great quote! Imagine having to sue to have women recognized as "persons". How pathetic is that? And it's shocking to think that it's only been a hundred years since women were allowed to vote in Canada. High praise to those awesome women who have paved the road for the rest of us, and to women of today who continue to do so.

This has been quite an interesting post. So much history! Nellie was quite the Gal! We need more women like her in today's world! ;o) 1940! Good grief! That's just insane. And even crazier is the treatment of the First Nations people! Here in the US, felons cannot vote but being in a mental institute does not nullify a person's right to vote. And of course, here in the US Native Peoples are still treated like second class citizens (IMO). I need to go before my soapbox gets rolled out for me to stand on...lol
Thank you for the history. Was quite interesting. :o)

Wow, they were really conservative, and so long! Good, that this times are over!

Great post! And who brought theRights & Freedoms home! wink! This post speaks to many bones of contention, but for now! Hurray for the backbone of any nation! xoxo

since beginning woman suffered alot ,there still exist such places in my country where women are still live in very critical conditions ,where giving vote is minor problem then the problems they are facing for their survival

why do I get the feeling that Quebec is full of a bunch of A-holes?

I would have loved to have met Nellie. I can see she was a no-nonsense woman to be reckoned with. I wonder if she were our age today, what would she think?

Love Nellie!!!!!! We took a trip over the holidays to the Manitoba Museum and there was a little section dedicated to this very thing! So incredible - proud of my Manitoba!

Yes, mrsduncanmahogany, when I was in Winnipeg over Christmas, I went and saw it too. What a great display! Unfortunately, my photos of it turned out crappy so I couldn't use any for this post.

Great history! We woman have come so far since then. It's a beautiful thing!

Interesting that the movement spanned so many years. Since the US change was an amendment to the constitution it went faster. The majority of states had to ratify it but then it applied over the whole nation.
Very educational post.

What an interesting post...so full of great information. Enjoyed every bit of it.
xo

Sadly there are way too many idiots voting nowadays, and I'm not talking about people living in mental institutions. :D

I'm back!!! Sorry for my extended absence but hope to be back on a regular basis.

Any way....very interesting post. I always learn new things from you about Canada. Poor women of Quebec. 1940 seems a long time to wait behind the other Providences.

I, also, love that quote."Never retract, never explain, never apologize – get the thing done and let them howl!"

LOVE that quote by Nellie McClung. She ought to be the first non-royal female on our currency, don't you think?

Yes, Jim, I've seen online that she's been suggested for the new $100 bill which is appropriate, given that 2016 is the centennial of the Manitoba suffrage victory!

Here in the U.S., we elect children, idiots and criminals. Often, all in the same package.

Universal suffrage was a long and difficult struggle for so many. Back in October I came across an interesting timeline that I included in a post at the time. I hope you don't mind me referencing it:

Great day to celebrate. The day men realized that women were not chattel but actually human and could actually think for themselves....Sad there are so many out there trying to objectify us as only sexual beings and disposable but sadder that so many women, especially young woman believe it.

It is shameful we had to wait that long in Québec and if the Church had its way women would still have no right to vote! They were ready to get rid of PM Godbout for it, but his second in command was suspected of being anticlerical, so the bishops decided to swallow the chalice.

Congratulations! Next thing you know women will want equal pay for equal work. When do you think that might happen? I think it's past time to get a little uppity again.

Jono, some jurisdictions in Canada have already legislated equal pay for equal work and I'm proud to say that, once again, Manitoba was the first to do so! It was very, very contentious to work out the details in practice and it takes an extremely committed government to see it through.

Great post..We are not only voting but running for office..They opened a hole can of worms...;)

I tried to change the "hole" to "whole"..They wouldn't let me...Sorry

Me again...Thanks for your Birthday wishes for Max..Mollie stole his catnip!! My email is all screwed up and I don't have an email address for you anyway...so..another comment it is!!

"get things done and let them howl", indeed!

Women around the world have so much to be grateful for because of all the courageous women back in the 1900's.
Saw the film Suffragette a few weeks ago.....very inspiring.
Keep shining my friend.
Peggy xxxxx

The last vestige of accepted exclusion is atheists for any office. I want to ask how well all the elected "christians" have done so far.

I totally enjoyed learning all of this and you did a great job boiling down such a large topic into one great read!

Quebec, 1940...the Catholic Church not recognizing human dignity. Imagine that.

I have done a lot of reading on The Famous Five. A few years ago I found Nellie McClung's grave and was disappointed to see nothing on it except her name and dates.

I love that quote! Thanks for the history lesson about our great land!