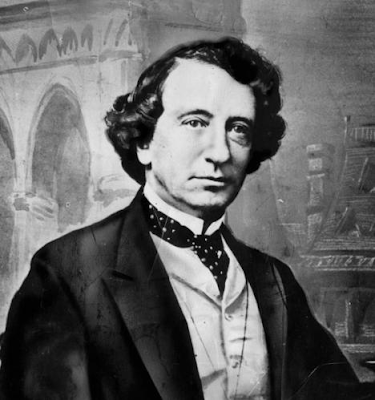 Canada's first prime minister was born on January 11, 1815 in Glasgow, Scotland. As a small child, he emigrated with his parents to Upper Canada (now Ontario). Trained as a lawyer, he made a spectacular career for himself in politics.

Macdonald was a true visionary. His vision helped create the Canadian Confederation of 1867 and then pushed it westwards across the continent with the construction of the Canadian Pacific Railway.

Of course, he had his foibles. A weakness for drink. The occasional brawl in the House of Commons. Some pocket-lining from CPR kickbacks.

But hey, Canadians love a bit of a bad boy. So happy birthday, Sir John A.! 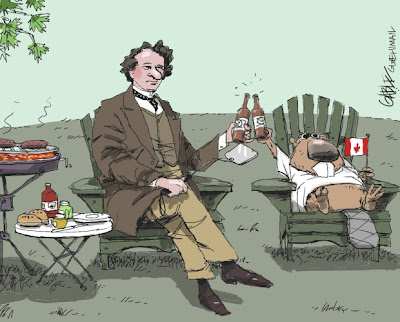 [Cartoon by Brian Gable of The Globe and Mail]

Happy birthday to him.

I agree, here here!
My grandfathers name was John Angus MacDonald, he liked to drink too, he was not the Prime minister though, he was a farmer .

I think I would have like to meet this man!!

Happy Birthday John A! I took a tour in Kingston a few years back and saw his old stomping grounds. The tour guide shared a number of humorous stories with us - he was a character.

I lift a Sleeman's to the P.M.

i wonder if he liked to drink rye?

I knew he was a drunk but didn't know about the $ from the CPR. I suppose he would fit right in with today's crowd.

Happy birthday to John A! I think I would have liked this man.

he sorta looks like a boozer..that nose needs to be red...happy birthday Johnny boy.

I moved my blog, but there is a feed problem with my old blog and the posts aren’t showing up. You can visit my new blog here.

Haha - I was thinking the same as Jaz - "Canadian Club" might be his drink.

Didn't know that. Jan 11 was my dad's birthday too. Did you send me your addy? Can't find it:( duffettfolkart @yahoo.ca

He loved to drink AND get into fist fights? My kind of politician! Where's this kind of guy now, eh? We've gone soft!

He sounds not unlike a lot the men who've followed him in that role today!

A politician who likes to drink...never heard of such practices from political leaders!

America could use more of his kind!

so true! There wouldn't be Canada as we know it today without him. Wouldn't it be great to have a holiday to celebrate him.

Oh that MacDonald crew!! I can say that since my grandmother was part of it.
Sir John A. was quite the character! Maybe that is exactly what we need here in Canada! Don't you think?

I did not know this info about Canada...Thanks

I've had a wallet full of his pictues before!

(and if memory serves me correct he got kicked out of office for taking bribes and had Louis Riel exicuted!)

Some drunken bastard had to get the railway done and if he had to kick a few asses to do it...so be it.

was he the one who talked with ghosts, too? too damn many of em, PMs, to keep straight...

Laughingwolf, you're thinking of William Lyon Mackenzie King. He was a real character too.