In late 2010, Johnson & Johnson abruptly discontinued production of its popular o.b. Ultra tampons. The company was elusive about why the product was no longer available. Women were outraged and started a company-wide "girlcott." In late 2011, the company announced that o.b. Ultras would again be available for sale and admitted that it had underestimated women's brand loyality to this product.
Johnson & Johnson then contritely posted an online personal apology video called Triple Sorry. It's a deliberately cheesy, tongue-in-cheek power ballad sung by a romantic hunk using every cliché in the book. It will make you pee your pants laughing! 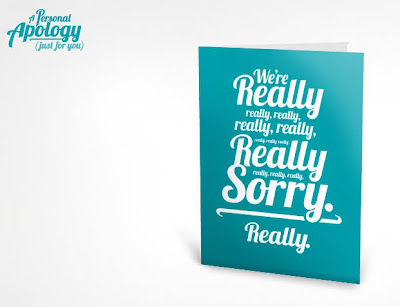 The video really showcases the latest, positively magical computer technology. When you go to the site, simply type in your first name and YOU become the STAR of the apology video in both the song and its visuals!
Check it out, if you haven't seen it already. Click here! (There's a small delay before the video begins so that the technology can craft the video just for you, so be patient!)
P.S. According to the Globe and Mail, the video was created by the Toronto-based advertising agency Lowe Roche, so yay Canadian humour, creativity and ingenuity!
Posted by Debra She Who Seeks at 05:30

well I'm impressed too! Thats really something and to top it off my name rhymed with sorry!

I haven't used them myself LOL :)) but I think those never stopped being sold in my country. But we often have things in our shops even after the rest of the world discovers they are poisonous or dangerous ;)

Heehee, I feel so loved! After all the money they've wrung (sopped!) out of us over the years, we should at least be on a first-name basis.

I've never used them, but I did accept their apology.
Mary

Ohhh! I loved the part where he ripped his sleeve off for me! Debra, this is hysterical. Thanks and once again i shared it!

~the best sorry i have ever had...roses...a tattoo and so so much more...sigh...life is good...hehehe...thanks for sharing and a good effort on their behalf...much love light and blessings~

That's what I used way back when...so much better than anything else...Loved the apology also...

Aww man, I loved that!
What a freaking hoot, they totally got me with my name splashed everywhere,lol

Oh, I've been a bit grumpy because I've broken my big toe, but this has made me feel WAY better!Hilarious indeed. If only they were all this funny!

OK, that is so funny! Love it. I am passing this one on. Thanks for sharing!

And yay for vaginas!

Sadly, I never even noticed they had been discontinued. lol

DANG!
I used their product for years, and their apology won't even load on my computer!
Now, how is that fair???
I want an apology for the non-apology... ;-D

If I had used these then there is something wrong!

I don't use tampons, but if I did I would accept his cheesy apology....then I'd tell him to stop being such a friggin' girl.

Ha ha...so funny! I think the person who came up with this idea should get a raise and a promotion! Quite the quirky imagination!

haha...i found a tampax in an old purse recently and it looked like such an artifact!

I hate tampons but that is hilarious!

I don't know where you find this stuff, but I'm glad you do. Best apology ever.

Girlcott? What a great word!

Believe it or not, tampons are difficult to come by in this country outside the big cities. The reason is that girls would "lost their virginity" if they inserted one. Well, at least they have sanitary napkins now. Thirty years ago those were rare too.

Bloody brilliant - I don't know this brand but I love the apology anyway - rose petals and tatoos - I know he REALLY means it! LOL

I felt ashamed for what I had done. I don't have any excuses. I did what I did. I take full
responsibility for myself and my actions. I wouldn't pawn this off on anybody. I'm sorry it happened. And I hurt people. See the link below for more info.