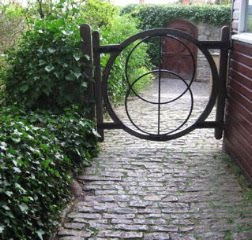 In sacred geometry, a circle is a wholistic symbol of the never-ending cycle of existence. When two circles intersect at the halfway point of each, a third shape is formed -- the vesica piscis -- an almond shape which, to pagans, represents the sacred yoni or vulva of the Divine Feminine. All of creation emerges through Her divine yoni from Her sacred womb. And all of creation returns to Her on death, to be reused in the Goddess's eternal cycle of transformation and regeneration. The vesica piscis also has Christian and Masonic interpretations.

In 1919, British architect and archaeologist Frederick Bligh Bond rendered a stylized vesica piscis symbol in wrought iron and wood to create the now famous cover for Chalice Well [see the photo in yesterday's post]. On the cover, the vesica piscis is bisected by a spear or sword. This may be interpreted generally as a symbol of the Divine Masculine (or more specifically, it might represent the spear which pierced Christ's body during the crucifixion or perhaps it is King Arthur's sword, Excalibur). The bisected vesica piscis is surrounded by foliage representing the Holy Thorn Tree of Glastonbury. Pagans interpret this beautiful well cover as honouring the sacredness of Chalice Well to the Divine Feminine.

The vesica piscis imagery of the Chalice Well cover is found throughout the Garden, including in a wrought iron gate and stone mosaic on a garden walkway, as pictured. The imagery is also the basis for the Vesica Piscis Pool, which will be the subject of my next post on Chalice Well Garden in a day or two. 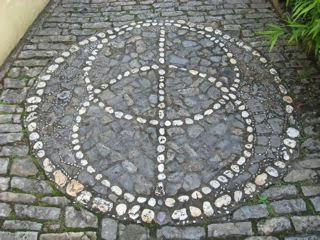 I love reading about symbology. Thank you for sharing.

Thanks for sharing this, Debra. I love this stuff. Keep it coming.
Mary

I just knew it was some kind of special symbol when I saw it on the well in yesterday's post. :)

Interesting. Thank you for sharing.

i love coming over here and learning something all the time.

You are going to laugh, this has given me an idea for a blog post. It is actually a discussion with one of my sisters the other day and this reminded me of it.

Wow - I didn't know about this symbol-within-a-symbol. Thanks so much for the pics and history. I love this stuff!

So fascinating and meaningful! I looked up vesica piscis and found the translation "bladder of a fish." I love the imagery in relation to the Divine Feminine and to Christian tradition as well. As I said, very meaningful!
(I found you through Whimsical Whispers and glad I did. :-D)

Hi Rose! Yes, the translation of the Latin term "vesica piscis" is not very romantic or even particularly attractive, is it? Another word for vesica piscis is "mandorla" which means "almond" in Italian -- a much nicer image!