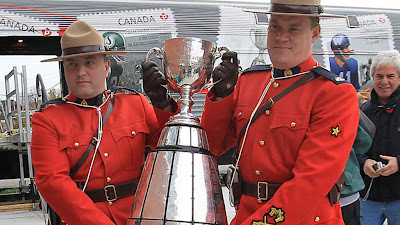 The 100th Grey Cup Championship of the Canadian Football League will be held this Sunday in Toronto. The Grey Cup is second only to hockey's Stanley Cup as the most coveted professional sporting award in Canada.

The original silver cup was donated by the British peer Earl Grey who was Governor-General of Canada from 1904-1911. 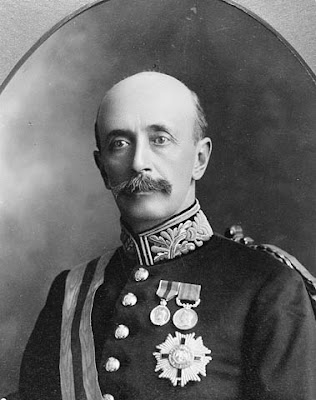 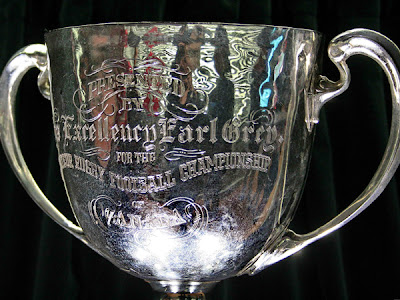 In the past 100 years, the Grey Cup has had its fair share of scrapes. It narrowly survived a major fire, was once stolen and held for ransom, and has also been broken four times (three of those breakages by Edmonton Eskimos . . . oops!)

To celebrate this year's 100th Grey Cup game, the Cup has just completed a cross-Canada tour by train. And yes, I went and saw the Cup when the tour came to Edmonton. Tomorrow -- photos of my pilgrimage!

Earl Grey - silver cup donor, maker of amazing tea, and holder of a badass mustache. Was there anything that man couldn't do?

That cup has seen more excitement than I have!

My hubby is a huge Eskies fan, season ticket holder. We live five hours away. Football and hockey are major time sucks in our house. I shouldn't complain though, since it keeps him out of the whorehouse. LOL!

This is one I actually knew, but only because it was connected with rugby-the sport of men in shorts!

I don't follow football and have only been to one Grey Cup ever (I was frozen to my seat) I've always wondered WHY the heck is the championship held this time of year? Shouldn't this have been held last month when it wasn't winter... !

Ha ha, just read Jane's commnet - and her an Edmontonian!! I thought you guys liked being frozed to your stadium seats! Anyway, the only time I'm interested in football is on the Grey cup week-end. It is infectious, what with wild westerners invading our stodgy east
11 I'm really happy that the game is in Toronto and Toronto is playing!! Gonna be a party!

I saw one of the 'oops moments when it go dropped.long time ago but I still remember it..

My cat's name is Earl Grey, so I am just giggling, sorry!

One year my daughter and I went to Vancouver for a holiday, not knowing that it was the Grey Cup weekend. Wow! The city was boiling with excitement!

...and named for the shittiest tea i've ever had the misfortune of tasting... that goddamn bergamot is as crappy to me as cilantro!

may they get mulched, and burned in hellfire!

Great info, Debra. Between you and Francie, we'll all know everything there is to know about Canada :)

Yeh Argo's!!! We won yesterday! Yepee!!! I remember when John Candy, was part owners of the Argo's! He was a blast! Him and Jim Belushi opened a couple of the games, with the blues band! Those where fun games!! And, I love our Pinball Clemons'! What a great man! I could go on and on! Yeh to our Canadian football ;o)

Funny how some sports people here in the States are clueless about the CFL.

Good luck to whoever is in the championship this year.

Yeah, I'm not afraid to admit that I'm kind of clueless about the CFL, other than knowing for years that a lot of football players from here used to use the CFL as a bargaining chip to get a better deal from the NFL.

I had no idea

I would be the one to drop it. I have no doubt in my mind. What a legacy!

Very interesting Deb, I have to say I don't remember any of this. I really only get into it at Grey Cup.....much to the disdain of hubby. Have missed reading my fave blog.

Is this the same Earl Grey that the tea is named for?

Hi Suzy8-track: I believe the tea is named for an earlier Earl Grey than this particular one. "Our" Earl Grey is most known for the Grey Cup.

ugh...bev can no longer access her blog. this is looking very grim. they don't even want to put the feeding tube in. her last name is swetnam if you want to send her an e-card, they will print it out and hang it on her wall. she is drugged and out of it though. i am beyond upset.