Edmonton Tarot: The Magician (I) 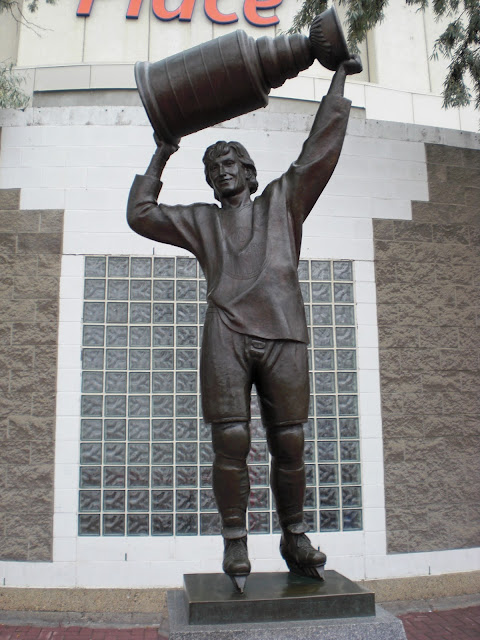 Interpretation: The Magician draws energy from the universe (ideas, creativity, spirituality) and directs it into practical applications. He transforms ideas into action and makes potential manifest. The Magician has tremendous powers of concentration, focus and determination. He knows that magic is not performed by magic.

Image: Who else could possibly be Edmonton's Magician except for the NHL's greatest hockey player, Wayne Gretzky? When he played here in the 1980s, the Edmonton Oilers was the best team in the league and won the Stanley Cup five times. This statue of The Great One stands outside the hockey arena where the Oilers won their many victories. Gretzky and the Oilers made Edmonton "the City of Champions."

[Photo by Debra She Who Seeks]

Thanks to your blog I actually knew who Wayne Gretzky was!!

Even if you're not a hockey fan, you will know who 'The Great One' is. I remember him very well from way back when....

wish I was a magician!

notice he so wowed bc, they named a hiway after him?

You couldn't have picked a better image for The Magician!!!! Marvelous! :0)

Love your choice for the magician...very appropriate.

Great magician is Wayne! I saw him at Maple Leaf Gardens when I was 16. I was on a first date, and it was my first hockey game. Last year I had my 2nd hockey game, it wasn't as good.

great choice! He seems like a nice guy too!

I love sports enough to pretty much at least know the best in their field..and Gretzky was the best...

Amazing how you are piecing this together.
Mary

Even I who is not a hockey fan, can appreciate The Great One and what he has accomplished!

Excellent! Only you could link Wayne Gretsky and tarot ;)

Draws energy from the universe ... and makes potential manifest. I love that, even though I don't know who Gretzky is. The Magician has some great mojo.

Draws energy from the universe ... and makes potential manifest. I love that, even though I don't know who Gretzky is. The Magician has some great mojo.

I like the line: "He knows that magic is not performed by magic."

#99, The Great One. Even me who does not really like hockey knows this Magician!

Yeah! I've caught up on your blog. Love this Tarot series, and excellent choice for today's card. It's almost as if the card were written with him in mind.

I remember when he was playing in Indianapolis, before his NHL career~~he was interviewed and was the NICEST interview I'd ever heard. The sportscaster said, when it was finished, "Ladies and Gentlemen, that young man is going to GO PLACES."
And he has.
And he is the one that should be the Commissioner of the NHL.

Being from New York, I know who Gretzky is too. Truly a great player!

My husband cried so hard the day he was traded to LA. He's never been the same since. LOL!

So far, my favorite! And it makes me sad about hockey, And it reminds me what a douche Gary Bettman is...I'm just saying...