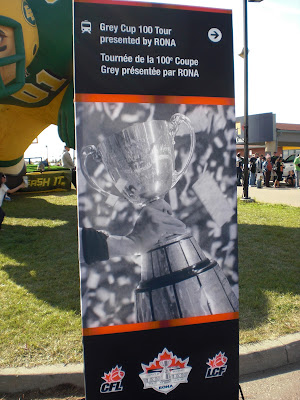 In mid-September, the Grey Cup 100 Tour train arrived at Edmonton's VIA Rail station. The lineups to see it were long, long, LONG! I was on site for two hours, of which one and a half hours were spent standing in line to enter the train cars. Luckily it was a gorgeous fall day and the event had a festive atmosphere. 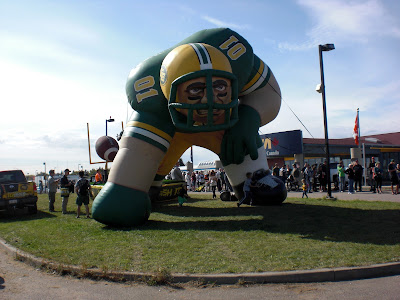 The Canadian Mint and Canada Post both had a big presence at the event. The Mint was pushing its shiny new Grey Cup loonie. Canada Post was selling a whole series of commemorative stamps -- one for every CFL team as well as a general Grey Cup one. 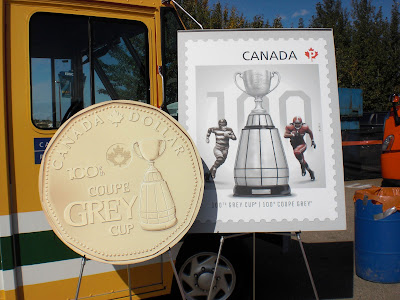 The train engine was beautifully wrapped in CFL and Grey Cup imagery. 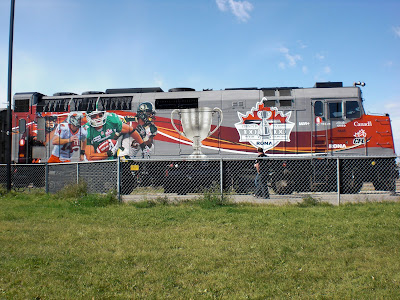 The train cars were wrapped with images of Canada Post's team stamps. I took photos of my three favourite teams: 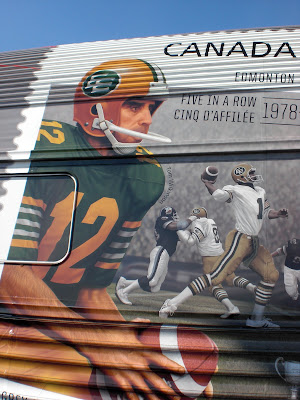 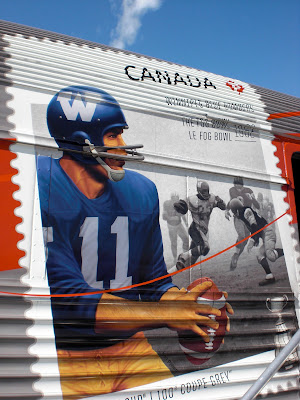 And the Saskatchewan Roughriders -- 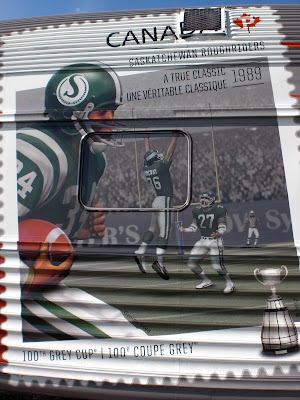 I'm a prairie girl so I cheer for prairie teams! Here's a shot of the Grey Cup stamp with its football players of yesterday and today. 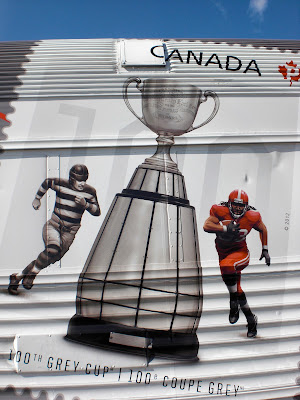 Tomorrow -- I finally get inside the train and see the Grey Cup!

Hey Debra! Sorry it's been a while since I've commented.

I love watching CFL on the rare occasion it's broadcast here. One of your better known players from the past, Condredge Holloway was an idol of mine when I was a young University of Tennessee fan. I somewhat followed him through the leaque.

Very nice! I don't folow football, but even I would have found this event pretty exciting. Those stamps are impressive.

Whether Canadian or American, football fans are very dedicated!

I like your football almost as much as ours..

I ADORE the Roughrider's fans, they are way too fun.

There is Nothing quite like watching a Bombers game at the stadium in October and refusing drinks as the layer of clothes was too difficult to remove when you needed a trip to the Ladies. I miss those games!

I a huge football fan and I love seeing this!!!

True story...growing up and living in Winnipeg all my life, I cheer for Edmonton Eskimos every single time. They have always held a special place in my heart ever since I won my first grey cup pool when I was extremely young and they were the team I randomly picked. Go Eskies!!!!

Oh wow, I don't know much about football, but that first photo threw me for a bit- green and yellow here in US is the Packers! lol Happy Thanksgiving!

Great photos Debra! You are a true fan!

Oooh...beautiful! I'm not a football fan, but this would be something I'd want to see. The train is less than 10 min. away from my home, so I'd drop by to check it out!

Come on, you don't like the Argo's? I have to admit, it's just fun to watch! Great photo's ;o)

Geez! That blow-up guy scares me!

WOW!! Now that is a train to be admired!! Via Rail has cut back so that the train doesn't stop in St. Catharines anymore (can you believe that?) so we wouldn't have gotten a chance to see it! But you did and I'm looking forward to the next post!