The Grey Cup 100 Tour train consisted of three cars for the public to visit -- the Team Car, the Grey Cup Car and the Hall of Fame Car.

The Team Car focused on the stats, history and uniforms of each CFL team. As you can see, the Edmonton Eskimos have won the Grey Cup many times -- 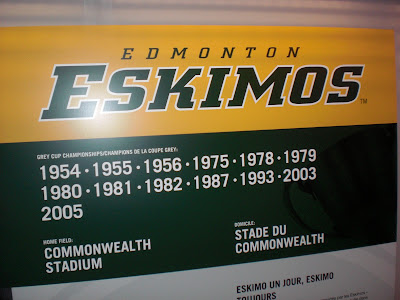 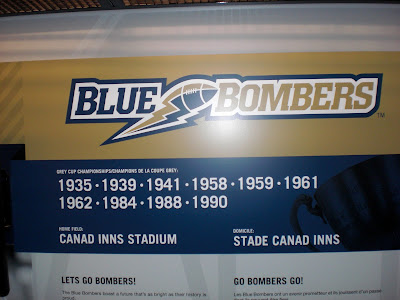 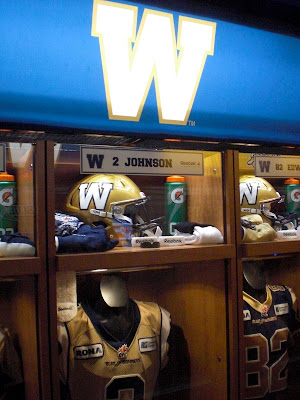 The Saskatchewan Roughriders enjoy fanatically loyal and patient fans who unfortunately have had to wait many, many years between Grey Cup wins -- 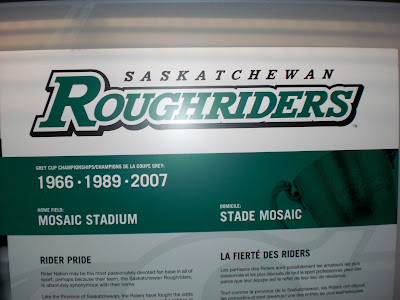 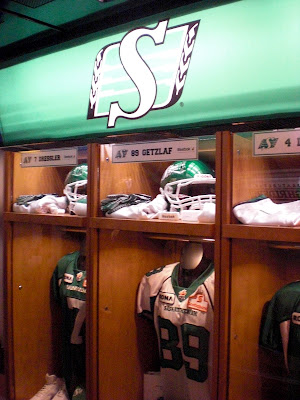 The next car displayed the Holy of Holies itself -- the Grey Cup! Here's my not particularly good photo of it but I could only take one shot because they were really hustling people through the car. Yes, I touched the Cup and had my picture taken with it -- alas, the photo didn't flatter either one of us but whatchya gonna do, eh? 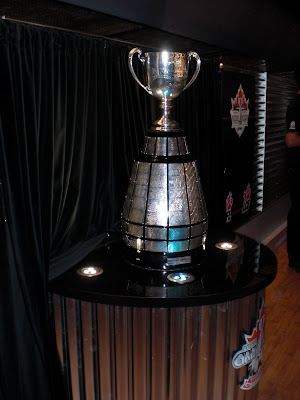 The final car was the Hall of Fame Car but I just breezed through it because the enormous crowd of people was getting on my nerves by that point. The only display I really looked at concerned the evolution of football uniforms over the years. The first uniforms and helmets were pretty primitive and didn't offer much protection at all.

Okay, so I hope we're all set now to watch the Grey Cup game on Sunday? I know I'M raring to go!

well I'm not much of a sports fan Debra... more into arts and music... enjoy the game!

If you have time tomorrow or perhaps Sunday or Monday, please stop by to visit the gratitude quilt and add words of gratitude of your own in the comment box below... it will be posted early Thursday morning, November 22nd.

Oh my! Looks like I have been missing quite an education here! Big Fan, Debra? Always good to have passion. **kisskiss** Deb

I hate big crowds. Especially ones that rush you along before you can enjoy the scenery!

I would have LOVED to have seen the train! DH and I will be glued to the tube, watching the Grey Cup.
Showing the Blue Bombers made me think of Troy Westwood. I miss him. He was always such a hoot in an interview and a little keg of dynamite.
CFL is the BEST FOOTBALL!!! Bar none. Beats American football smack into the ground.

We've been watching the "Engraved on a Nation" series, leading up to the Grey Cup this weekend. There's a lot of the "old boys" in there with their rings on. Holy Smokes are they ever huge!

Those Saskatchewan Roughriders fans sure have had a rough ride! I guess all fans of any team have one thing in common - their optimism and a healthy dose of denial, lol!

Roughrider fans are intense! Tons of them travel to Edmonton when the RR are playing the Eskies! I guess they're all optimists.

I'm glad my hubby won't be here for Grey Cup.

Not really into sports but happy to read about something you like!

This is such a fascinating series of posts! Blue Bombers who? ;)

wow, I never knew this stuff,

Very cool, Debra! We're bereft at losing out here in B.C., but will still tune in Sunday and watch the excitement...:)

at every grey cup game, more saskatchewan fans show up than from any other team, sometimes more than any other two teams combined... THAT is loyalty!

Wow! The Roughrider fans have a rough ride between victory!! But fanatical fans are the best fans!!

That is pretty cool, Debra!

Fabby Doo DA!!! Oh I am so ignorant on this but apparently I have to go for Agro's.... Stacey's recommendation ;)

Total hockey fan here ... which is perceived as weird here in the States. Our NHL players are having a pretty nasty labor dispute now, so our season is on hold. Been a Capitals fan since the 1908s, and I'm generally thoroughly immersed in 'Rockin' the Red' by this time of year, and I'm trying not to get TOO depressed about not having hockey yet. Perhaps everyone will come to an amicable agreement soon ... we can hope.

you know where I'll be..although the fecking cowboys lost to the redskins I'll still be watching american football..hope your team wins.