Poppies From the Heart 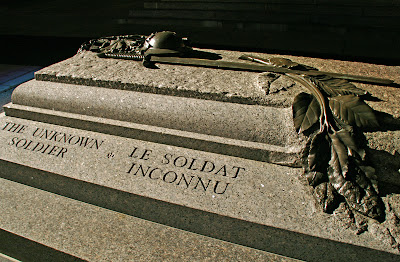 In the year 2000, the Canadian government placed a tomb of the unknown soldier at the National War Memorial site in Ottawa. On the first Remembrance Day after its installation, Canadians spontaneously created a small but beautiful gesture to pay tribute to our Armed Forces war dead. After the official ceremony with all its dignitaries, prayers and wreath-laying was completed, the attending crowd did not simply disperse but surged forward and put their poppy pins on top of the unknown soldier's tomb. 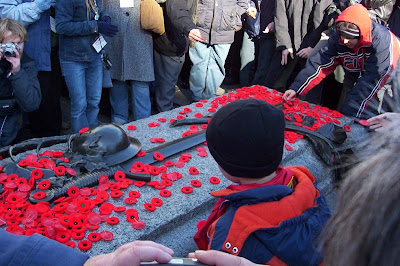 Now this ritual has become an important part of every Remembrance Day in Ottawa. Seeing the grey granite tomb awash in a tribute of red poppies is one of the most moving parts of the whole ceremony for me. 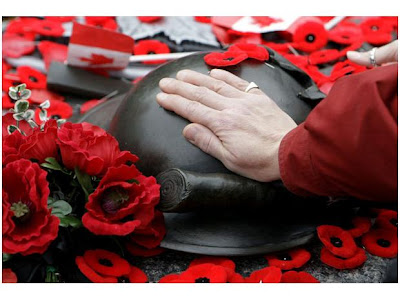 It is a wonderful new tradition created by the heartfelt collective action of Canadians.

Truly beautiful~~so glad to know the story behind how the tradition started.
I again say Canadians have a deep appreciation that is not echoed here in the U.S. (which saddens me....)
Keep that Canadian difference and spirit alive. ♥

it is such a wondeful thing, makes me feel proud this does,

I didn't know this is how this wonderful tradition began. What a great thing this is. So proud to be a part of this amazing country of ours.

Here in the U.S. we wear a red poppy on our lapel for Memorial day and also Veterans Day. It's a lovely way to remember those who have served us and fallen. Lovely post today!

A very moving tribute to the Fallen.

What a lovely tradition.

Moving photo! And a wonderful tradition.

Wow, that is absolutely beautiful. What an amazing photo.

That is so beautiful. People can be awesome.

What a beautiful way to honor those who died fighting. The rebirth of the flowers is a beautiful symbolism. I love the color splash.

That is moving! Humanity does exist after all!

We are a great people because we wish to be.

And so beautiful traditions are born and continue.

I wrote about the significance of the poppy back in 2008 - a tradition that grew out of a simple but moving poem that also became entwined with our remembrance.

A lovely remembrance to those who died for the freedom and safety of their nation.

I echo all other comments here.

I love it too. And what Kal said!

I wish we did poppies here. What a neat ceremony!

happy to have found your blog. beautiful tradition. would love for you to visit my blog and follow if you like it.

I'm positive we have some cool stuff like that going on here, but all I see are stupid commercials for appliance sales. Nice.

This is very moving to see Debra. Let's keep this tradition going here in Canada and maybe other countries too.

It is very much observed here in England.

How truly moving and beautiful.

I love this story! Thank you so much for having this on your blog. Like you, I love that red against that gray and the outpouring of love that just came from the heart. Lovely, thank you.

When the living get together to do something nice in memory of the dead, miracles happen.

thx deb... we're all brothers and sisters, from different mothers....

For me as well Debra. And I have to say something about tthis trip to Ottawa changed me and how I feel about Canada. It will take me a while to process the feelings they are so deep. Your hand on the tomb is a powerful image. thanks for posting that.

Making me tear up, here.

vets give the poppies away every year..you give a donation of what ever you can.

Wow. I'm late commenting, but this brought tears to my eyes this morning. What a beautiful tribute from the crowd, and even better that it was completely spontaneous.
Splendid.