High in the Japan Alps, a UNESCO World Heritage Site called Shirakawa-go preserves traditional rural Japanese houses, barns, shrines and outbuildings in a village setting. Some of these buildings are 250 years old. When we were there in early April 2012, there was still a lot of snow on the ground. 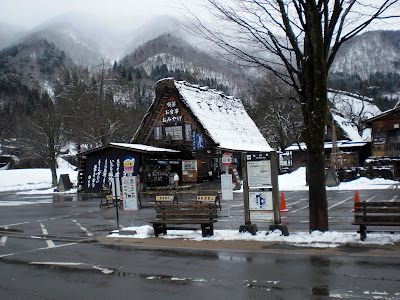 In fact, it snowed while we visited. The big fluffy snowflakes falling gently to the ground made the village seem even more charming. But it wasn't particularly cold -- only about -1℃ (30℉). 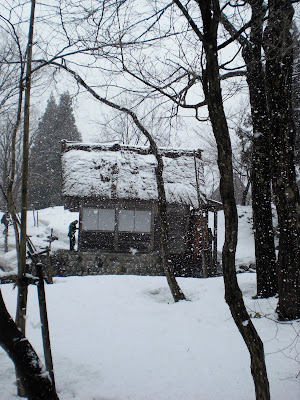 The wooden buildings of Shirakawa-go all have thickly thatched roofs in a steep A-frame architectural style which was developed over generations. The roofs are designed to withstand the large amounts of heavy snow which the region receives. Here's a shot of the roof thatching method, which is done completely without the use of nails: 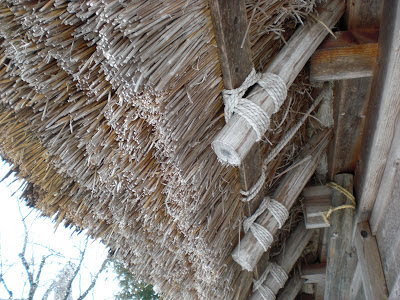 This roofing style is called gassho-sukuri which means "constructed like hands in prayer." It is thought that the steep roofs resemble the hands of Buddhist monks pressed together while praying. 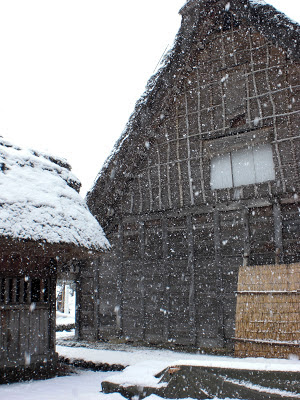 Traditionally, the second floor of each house was dedicated to silkworm farming. The family would live downstairs. 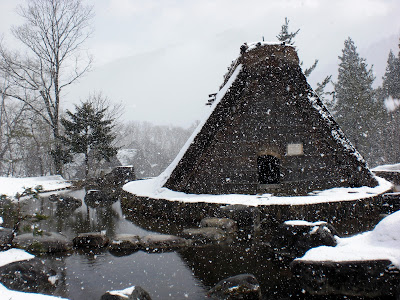 Tomorrow: A couple of surprises in the village!

[All photos by Debra She Who Seeks]

I've always wanted to visit Japan ... especially Kyoto, but I seem to be adding to my list of places to visit with your posts!!!

You had so many interesting experiences on that trip. I'd love to have seen these houses. The only thatched buildings I've seen have been in UK.

what an amazing trip, I can't wait to hear more!

So interesting to learn. I love the 'old' Japan. I used to have a pen pal for many years in Japan, when I was a teenager, but after he got married and they had a baby, the letters stopped.

You must have had a wonderful trip...travel being an education in itself.

Fascinating! I'd love to visit someday.

Your photos are great! This is so interesting...

Those photos are absolutely astonishing!

What a magical place Debra! Must have been a wonderful experience to be there. Love the thatched roof!

i love japan, but i'm never go there. Hahahahaha

A beautiful area. And steeped in so much history! I love to explore places such as this one, a person can learn so much.
Especially love the last photo! Marvelous shot!

how cool. when i lived in seoul, there was an old 'red light' village there across from the canadian embassy. it was preserved and turned into a restaurant. in it's day, the houses were frequented by the clients who wanted what each house offered. each one offered a different 'service'.

Oh that's so cool! I love traditional housing methods and the story behind the name is lovely.

Amazing! This is culture-rich area is filled with fascinating things to see. It is a trip you remember your whole life.

I so enjoyed my visit to Japan a few years ago. It is a magical place.

Just getting through the blogroll...I had no idea it snowed there in Japan!

What do the silkworm farms look like? Seriously, I'd be too creeped out, but it's neat to read about!

I am always impressed with Japanese architecture. Even the names are beautiful.

Hi Heartinhand -- Silkworm farming was done by having huge trays of silkworms indoors, all munching away on mulberry leaves or whatever the hell it is they eat, and spinning out silk as a result. So a second-floor space could probably hold a lot of silkworms, I'm thinking.

Such beautiful buildings. I'm so glad they've taken their preservation seriously. I look forward to more!

Those are beautiful photos. Now you're making me want to go there.

Damn I love me some Japan. I read a book once where the Americans had a plan to plant fire bomb to bats in order to burn down these ancient wooden homes during WWII.

Hi, Debra! that's very interesting to know about Japan and moreover, SEE it! i loved these houses, and the snowfall makes it look so cozy. thanks for sharing your trip with us:)

What beautiful photos! How lovely to visit Japan.

Such a fascinating place, and so beautiful with the big flakes falling! Haven't seen even one flake this year, and might not see any for the rest of the winter.

Hmmm. I can imagine the quiet. Very beautiful!!

I don't know how I'd feel about worms in the attic.

This is so beautiful! I love the pictures and the history! I can't wait to see more ;o)

~these pictures are gorgeous as is this village you visited...what a trip it must've been...warm wishes and brightest blessings~

It’s really good to know about the ‘gassho-sukuri’. At the same time, I’m pleased to find out that this traditional roofing is ongoing. I’m sure there are modern roofing techniques like slate roofs, but the keeping the custom is way better. The air is undeniably Japanese, by the way! -->Son