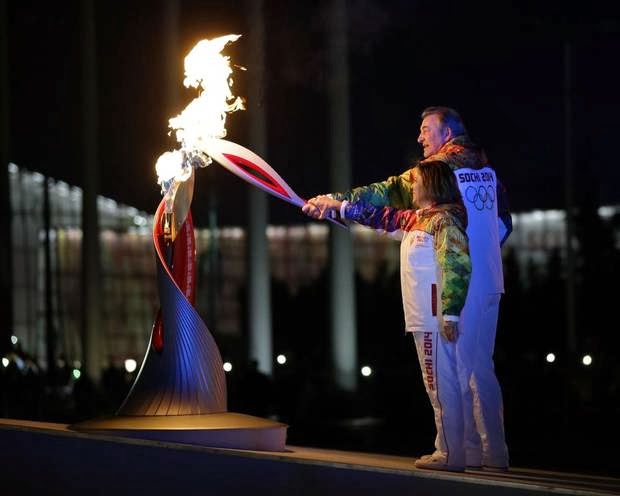 My Rare One and I really enjoyed watching the Opening Ceremonies from Sochi on Friday night. The biggest thrill for me was seeing Vladislav Tretyak light the Olympic Flame.

Who the hell is Vladislav Tretyak? Every Canadian (of a certain age) knows!

Here he is, young and handsome, in 1972. Oh, I had such a crush on him! (What? I was 15 years old and under the mistaken impression that I was straight like everyone else. Gimme a break.) 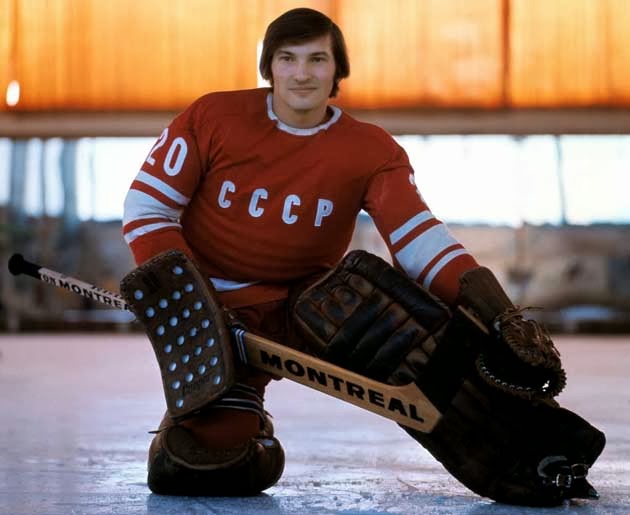 Yes, he was the Soviet Union's goalie in the 1972 Canada-Russia Hockey Summit Series. It was the first time West and East had ever met on the ice. To hear Canadian politicians and sportscasters tell it, the series would determine who won the Cold War plus the fate of the entire Free World. Canada arrogantly thought the series would be a piece of cake and we'd send the Russkies home with their tails between their legs. But it didn't work out that way at all. The Russians damn near won the series. It was only Paul Henderson's goal in the dying seconds of the final game that gave Canada the series win. The whole thing was ridiculous, really. 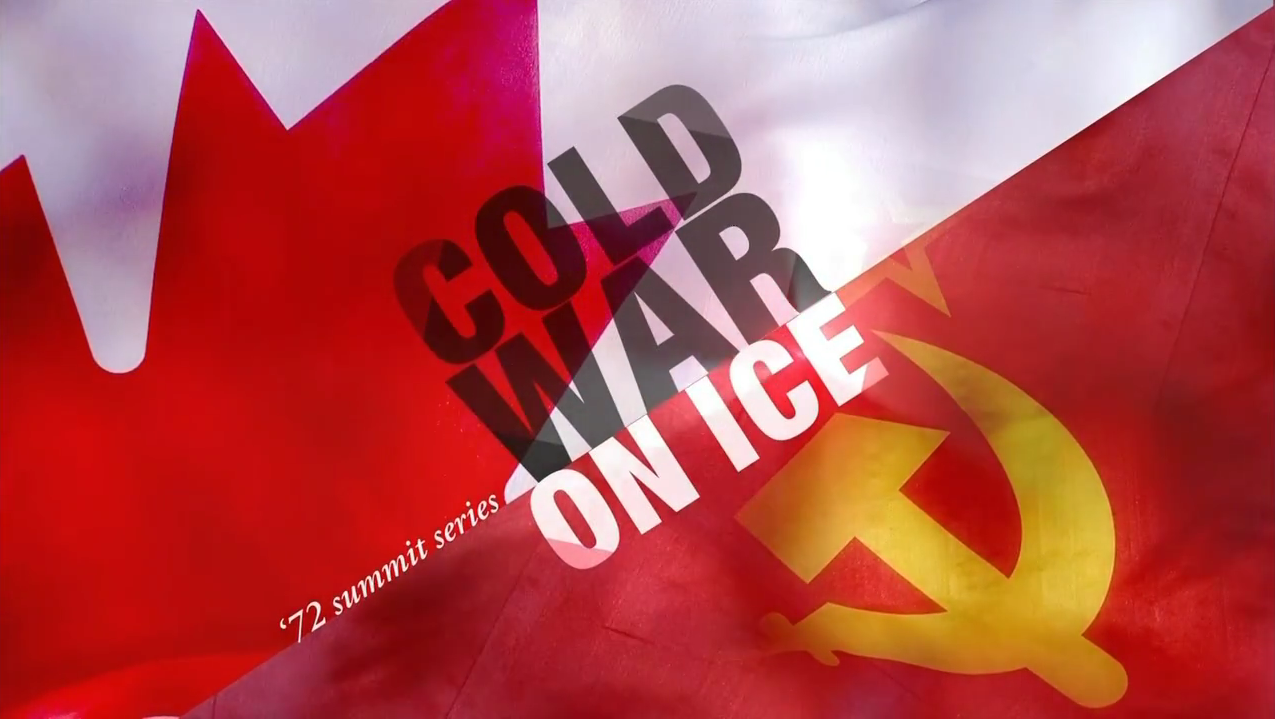 Anyway, I was also a fan of Alexander Yakushev who was the Soviet Union's leading scorer. Very tall and craggy looking. And you know what? Since that series, I've always had a thing for both Slavs and Roman noses. 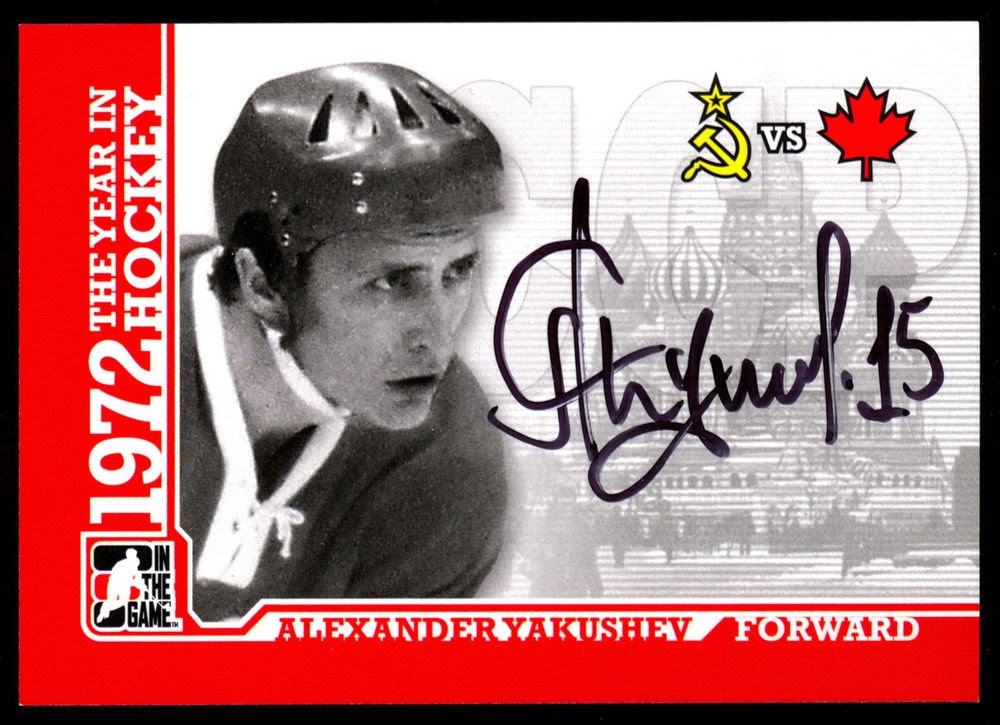 And you know what else? My Rare One has a cute Roman nose and is Ukrainian so yes, I'm in lesbian heaven now.

There are specific Slav/Roman noses? Not just "guy who got into one too many hockey fights" noses? There's a documentary about the Canada v. Russia series, isn't there? Why do I have the announcer shouting "HENDERSON" in my brain?

I really hate to admit it, but I've not watched any of it. I don't know why because I usually enjoy the Olympics.
Mary

I had no idea who Tretyak was. I always learn something new here.

Seems like the hockey players of days gone by were so much more handsome than today's stars.....
Well...maybe not all of them!

I love Russian athletes! They win so many medals even though they don't have the same training conditions as US and other Western athletes do.
He looks like Liam Neeson in that younger pic :)

I also loved the opening ceremony for the Olympics. I did not know the man who lit the torch so I thank you for telling me this.
Now, I hope you were not cheering for the Russians in 1980, the USA won that one, I am still happy about it! We had the Atlanta Flames then, and just after that game, some of the hockey players from The MIRACLE Team came here and I posed with some of them! Happy memories with gorgeous young hockey players!!

I haven't watched a second of the Olympics, I do remember that series though! They replay it on ESPN sometimes and my husband watches it. All the hockey trivia I know is through osmosis.

I'm a bit of a fan of Roman noses myself !

I don't know if I have my own memories of that series, or just memories of hearing so much about it... I can hear "Henderson" loud and clear in my mind! And there is something attractive about those Eastern Europeans...

I have to laugh at hockey back then. I grew up with 80's hockey on Long Island. It was much the same way. Good times, good times.

I was bummed I missed the opening ceremonies...I heard they were pretty cool! They were doing the parade of athletes when I went to bed and then I was sleeping because I had to work. At least I get to watch most of the events this year!! The Winter Olympics are my favorite!

OH...and I left a little something for you at the end of my post today!! =)

I was very young at the time, but having grown up with two brothers, hockey was a favourite sport to watch. I used to be familiar with so many of the players despite my youth.

And doesn't Ryan Gosling have a roman nose? Well then...

I still have to watch a hockey game. Tim says I will enjoy it and that they are a lot of fun to go see.

I'm enjoying the Olympics too!.. that's a nice pic of him in '72. I can imagine that pic gracing a few walls back then.
Did you see the snowboarding? that was fantastic!! whoop whoop

I guess you are in heaven, Debra!
Wasn't it a different world when everyone was straight?!! lol

I watched the opening ceremonies but have seen virtually nothing else.

I am so happy to read that you are in lesbian heaven. Everyone should be happy where they are at in life. Yay for you and Your Rare One.

Well, Tretyak does look a bit feminine, I think. On this picture anyway.

I'm a bad Canadian cause I don't like hockey even though I grew up with hockey fanatics. Have no idea who you were talking about but he was kind of cute back in his day.
Sadly we don't have cable so haven't been watching the Olympics. I did try to see some of it online but wasn't successful finding anywhere yet.

They do have a distinct look, especially the nose. I was only eight at the time, so don't remember that Olympics well.

lesbian love watching the olympics. Love it. There Putin in your non-roman face! ;-)

I never knew who he was? Your last line made me smile ;o) So cute ;o)

I remember following the series and badly wanting Canada to win, even though I am an American. Also he looks like a current Robert De Niro while lighting the flame there.

Awww! I love that last bit!

That's an interesting Sochi Olympics introduction :) I am glad you like our noses!hehe
And I am also glad that you know Soviet sportsmen! Uraaaa!

I've been out of touch for a while and am glad to be back. I always enjoy your witty posts...:)

I am so enjoying the olympics..and have been rooting for the Canaderians so much someone actually called me a traitor..yup..