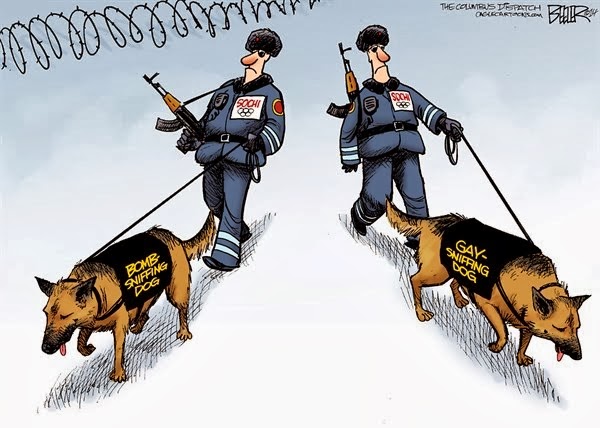 So the Sochi Olympics start today. My Rare One and I will watch the Games for the next couple of weeks and cheer on our country as always. Go for the Gold, Canada!

I don't support boycotting the Sochi Games. Yes, Russia's attitudes and laws about homosexuality are wrong and hateful. Russia's oppression of its LGBTQ community is rightly condemned. But you know, our western attitudes and laws were exactly the same 50, 30, even 20 years ago. And there are still many haters in our countries who would gladly return to those days. How self-righteous are the countries of North America and Europe really entitled to be? A boycott would allow us to feel good but would undoubtedly provoke a prolonged and violent backlash against the Russian LGBTQ community. That community faces the same lengthy uphill battle as we did for rights and respect. But countries can only be changed from within and by their own people. Russians themselves must fight the good fight to create modern attitudes. I do not doubt they are capable of it. Some day the Russian bear will proudly wear rainbow colours too. 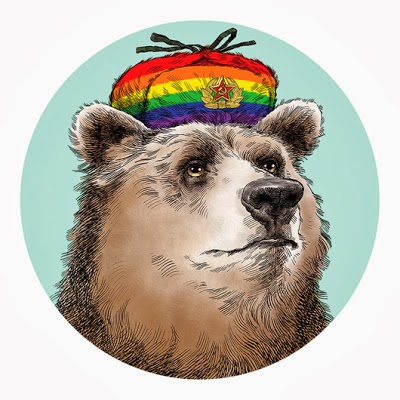 Most elite athletes train for their shot at Olympic glory practically their entire lives, from childhood on. Such athletes are at the peak of their performance level for only a very short time. It is not fair to them to take away what may be their only window of opportunity to win an Olympic medal. If the 1936 Olympic Games in Hitler's Germany could proceed, so can these. And who knows -- maybe the Sochi Olympics will produce its own Jesse Owens who will confound the haters!

But you know what? The Olympics have always been a little gay, both in ancient times -- 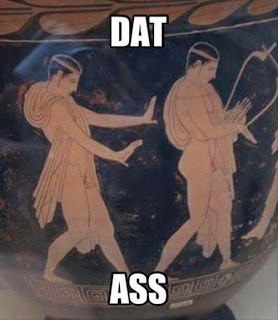 Oh, so THAT'S why the Double Luge event is so popular!

AMEN to that!
Great post Debra! Enjoy the games....we plan to!

This was good. Well thought out. I hope you're right that these anti-gay sentiments will soon change. I won't be watching mainly because I find most events at the Winter Olympics (and Summer Olympics quite frankly) excruciatingly boring, but I will watch curling. Curling has a hypnotic effect on me.

Isn't all of life a little bit gay really? :D

Enjoy the sports. I won't be watching, only because I have no interest in sport. :D

In the ancient Olympics they competed full naked... what more gay than that could we imagine :))

Wish those days would return :)

I think yours is probably the best point of view on the games, I've heard yet. Well done Debra! And I love that video. :)

I believe this is just the first wave of intolerance from Putin. A co-worker who's a Jehova's witness shared a story where they took down one of their sites for Russian J. Witnesses.

And now Putin the other day criticize many Western countries embracing secularism.

If he stays in power, I would figure the only church that will be around will be his Russian Orthodox one.

I'm sure these gay clubs in Moscow don't actually exist and are a figment of the KGB's imagination.

I am actually getting a little tired of the ceaseless outpouring of hysterical anti-Putin denunciation on the net. One doesn't need to be a genius to see that the real reason for it is not his alleged "despotism" but the fact that he's a major stumbling block in the march of the Empire.

I'll bet you that if Putin hadn't given asylum to Snowden and had allowed Syria to be bombed, notone person would have raised a peep about his so-called "ban" on gays (which by the way in no way criminalises homosexuality).

You definitely make a good point here! The video clip is too funny. Quite dirty when slowed down like that!

I loved the video and the pottery they made me laugh.
David and I will be watching only some of the Olympics. I love the curling event, ever since the Norwegian team showed up with those outlandish pants. I gotta see what they will wear this time.

HA HA HA>... LOVE the video, oooh,and the bear's hat is mighty nice too. You are right though, Russia will catch up with the rest of us one day when it comes to gay rights. Hopefully... xox

I am hoping that when ever anyone makes it to the podium they wave the rainbow flag...I hope there are no batshit people trying to blow the joint up.

Ah, I love Canada ! That video would never have been shown in France in an "official" capacity. And I totally agree with you, boycotting the Games would not have been a good idea; things cannot forced onto people, they have to feel the need for them themselves. Ouch, thinking of that video again...

Great Post!!! I just can't boycott the Olympics. I support the athletes. I'm just glad attitudes are changing where I live...and bout time!

Wonderful post, Debra! Such a mature and logical attitude. I agree with you wholeheartedly. It would accomplish nothing to punish the athletes.

Loved all the humour you included on this post!

I love rainbow bear! And you are right, here, about all of it. Love will eventually conquer hate. (I just wish it didn't take so long for many humans to get it.)

That Ancient Greeks had a very open-minded view of homosexuality makes Russia's hosting of the Games all the more disgusting. Yes, Hitler was humiliated by Jesse Owens, but the Olympics of 1936 still legitimized the Nazi regime. Stephen Fry called for a boycott of the Games, and I tend to agree with him.

I stand behind "DAT ASS"!

Did you hear we are flying the pride flag for the duration of the Olympics?! Yay!
Russia is 20 years behind. They'll catch up. They have to.

This is a most excellent post. I am a big believer of educating people on subjects that they are simply ignorant on. There was a time when I was over the top homophobic but I now feel differently. I know you know the story but it always is worth repeating. If I can change anyone can change.

Very well said. I'm not sure what the right course of action any more, but you're right, change does have to come from within. It's so sad that it has to be this way to begin with though. Caught that commercial the other day and really quite enjoyed it. :D lol

Blessings to you and hugs,
Bird

I can remember when Jimmy Carter made America boycott the Olympics because ... drum roll ... Russia had invaded Afghanistan. Ahem, America is now fighting in Afghanistan.

I stand in admiration of athletes who spend their whole lives in pursuit of these more esoteric sports. Forget politics, and just let them compete!

Great post Debra..Well said..The athletes should have all of our support..

You are absolutely right - we're not far along enough (at least not in my country) to turn up our noses and say we have equality for all.

I love the bear in the rainbow cap!

PS will be surprised if Australia wins anything ;)

Oh yes, the GAMES have always been hell a LOT gay, that's why we watch!!

Lovin' the Bear with the rainbow hat!

I can't watch the video on this computer but I did laugh at Dat Ass.

I've had a conversation with my kids about the politics surrounding the games and my ambivalence about it all. My daughter decided after our conversation she wanted to support the athletes even if Russia's attitude (and Socci's hotels) are really yucky!

I, too, won't boycott watching the Olympics. The athletes have trained hard and deserve our support.