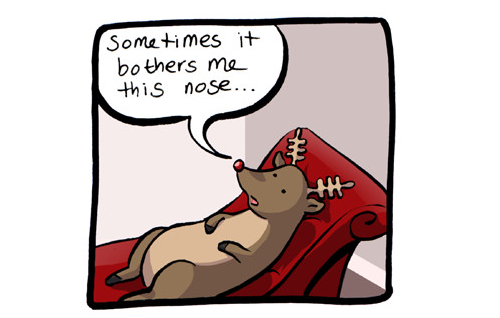 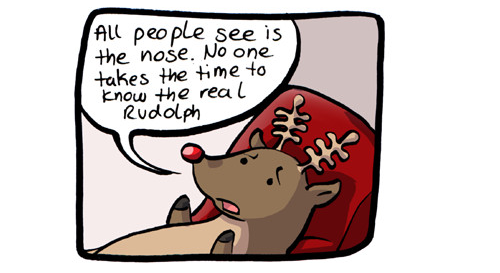 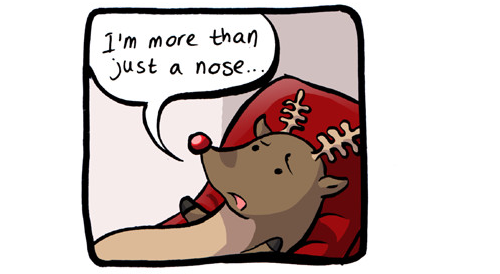 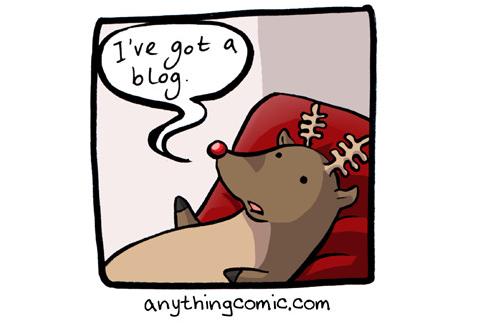 Poor Rudolph. I know exactly how he feels.

is it a blog on how to polish your nose?

LOL- Isn't that the truth? So often we don't look deeper than the outward appearance of someone. I wonder how many deeply wonderful people we have missed by assuming that we know who they were by the way the looked?!?! xo Diana

Everybody has a blog these days.

Poor Rudolph! He needs to embrace his famous attribute.

At least he's not going on and on about the damned reindeer games this time...

What's the title of the blog - "the nose knows"?

Suck it up, Buttercup.

I guess Rudolph's red nose comes from all of the alcohol fumes leaking out of the man in red suit, do ye think ?

and he only has four people who follow him...

I know that feeling, ha. Greetings!

He probably wishes he could post on Christmas Eve.

How do you know someone has a blog? Don't worry, they'll tell you. lol
Do you think Olive, the other reindeer follows him?

Haha! Poor Rudolph... imagine the blog post he could do on Christmas Eve if he were free!

And his blog is called "What Rudolph Nose", and I hope he knows that that tiny bit of cleverness is what's pigeonholing him.

Don't worry, my dear deer, you'll go down in history.

His nose is just very cold. Someone give him a nose mitten, please.

ALL the other reindeer follow him. The song says so.

For me Rudoplh is a beer. Never liked the song much.

That nose has always been the bane of his existence. He wasn't allowed to join the reindeer games as a kid. He didn't get to pull the sled until it was so foggy that Santa came begging. No one should face that much rejection. I feel for you, Rudolph.

Rudolph should lodge a HIB complaint against those other reindeer for bullying him. Just saying.

Poor guy. At least he'll have support from his blogging pals :)

I would totally follow Rudolf, especially if he blogs about his nose. *runs away cackling*

Funny..Poor Ruddy..I guess we all have a cross to bear!!!

Hey Rudolph, I nose what you mean. However, tell me more about the two aerials sticking out of the top of your head.