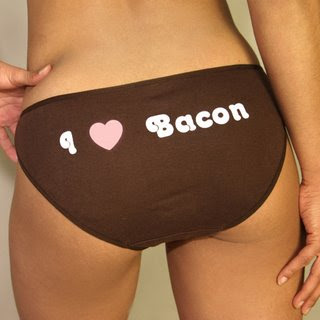 A recent survey* reveals that 43% of Canadian men and 42% of Canadian women would sooner give up sex than bacon. These numbers increase to 45% in Alberta and 50% in British Columbia.


82% of bacon lovers say they're also romantic and great lovers in the sack. But 13% fear that their partners love bacon more than them.


Mmmmmmmm, bacon! I love it too but don't worry, my Rare One!

[Poll conducted by Angus Reid in December, 2009 for -- who else? -- Maple Leaf meats. Reported in the Edmonton Journal, February 27, 2010. Be sure to check out Maple Leaf's fun website called Republic of Bacon!]

This reminds me of Homer Simpson "mmmmmmmmmmmmm bacon"

LOL, that's too funny! I doubt my husband would give sex up for ANYTHING, except maybe Angelina Jolie. Now THAT would be ironic.

~i should hope your rare one should not have to worry...if you chose bacon over your l♥ve then i may start to worry...people are STRANGE...well little lady there is a blog award awaiting your arrival...please feel free to swoop it up...i am truly delighted that i stumbled upon your blog and have bery much enjoyed your posts each morning...brightest blessings~

rose of Walk in the Woods, LLC said...

Too funny. Not so much the results as the survey itself. Yet, given the sponsor, I completely understand (and am amused by) the effort!

Ahahaha...that's fantastic!!! Mmmmmmmm I love bacon too, but it doesn't love me, so I'd have to vote for sex instead...lol. What a great poll!!!

Hey, I happen to LOVE bacon...but do I love it that much?
Mary

Haha! I love bacon, too, but here in Cali, it's almost sacrilege to admit it. Sigh. But I do sneak it now and then on a Cobb salad...:p)
Maybe I'm a Canadian at heart...

Are those edible panties. Bacon flavored perhaps? If not maybe sex and bacon can be combined so both can be enjoyed at the same time.

Travis, you are a wise, wise man.

Yellowdog Granny, I KNEW there was a reason you were singing O Canada all through the Olympics! You were a Secret Canuckian all along!

Or should that be a Closet Canuckian?

Haha! My husband and boys LOVE bacon but I doubt dh loves it THAT much... perhaps it's best we keep to this side of the border, eh?

I _do_ love bacon, but I love pork(ing) more ;) And as for the suggestion to combine the two, I would like to advise against naked bacon frying, based on personal experience. Just trust me on this one...

LOL! Nice pun, submerina! Wish I'd thought of it!

here is a link to the question you asked xo:
why Inglewood

I agree. Sometime bacon IS better than bad sex.

Bacon!!! I take mine crispy please:)

Oh yes, I do love bacon. It's one of those delicious things that stop me from being a vegetarian.

Cool post... I love bacon too... but its like coffee... you love the smell, you want it, you eat it, but you know its not good for you... really though in moderation its probably OK... my son #2 loves bacon a lot too - he'd eat it everyday if I let him... I love those commercials - so funny!

I only have both occasionally...

This reminds me of something...

There was a university (maybe it was the one my mom went to?) where a study was conducted, and the following "fact" was discovered: The students all agreed that ice cream was just as good as sex.

Being a vegetarian I must say this is hard for me to imagine...but I do quite enjoy a perfectly ripe peach in the summer...hmmm...nah...sex is still better.

-giggles- Where can we go to enter this in "The Most Crazy Polls"?

As a British Columbian who loves bacon - I understand all the excitement over it. But better than sex? Really? Um..no.

I just can't believe that people conduct surveys about this kind of thing. And we wonder why the earth is going to hell in a handbasket ... but who am I to judge: last night, in a fit of desperation to NOT know anything about the state of the world, I spent a couple of hours trawling the web for photos of Colin Firth in a tuxedo.

I'm thinking these 'bacon' lovers must have some lousy bed partners. LOL