At this time last year, I was in New York attending the Readers Studio tarot conference. I went a day early so I could go to the Brooklyn Museum to see Judy Chicago's masterpiece of feminist art, The Dinner Party. Walking around the neighbourhood afterwards, I discovered the Brooklyn Public Library down the street, with its absolutely stunning entranceway: 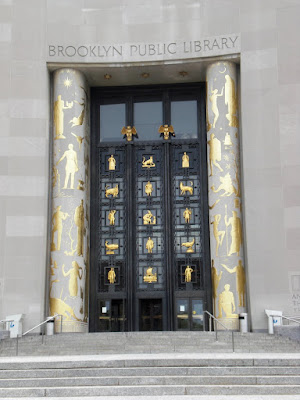 The huge bronze doors of the Library are decorated with gilded representations of characters from literature and mythology: 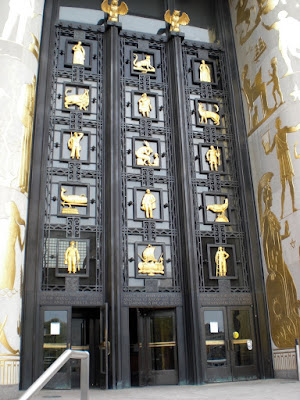 The two gigantic side pillars are similarly decorated. Isn't the Goddess Athena magnificent? I assume the huge snake at her feet is the Python of Delphi. 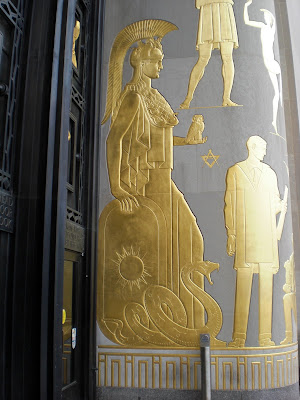 This entranceway is the most interesting thing about the building, both inside and out. I believe the original plans for the Library were much more grandiose but funding issues resulted in a plainer building being constructed. But that wonderful entranceway makes up for it!

My goodness, you were in my neck of the woods. It is a beautiful building, isn't it? There are some very special places here. Next time you are in town, let me know.
Mary

No sleep till Brooklyn!

Now that's the right way to honor books! Perfect that one of the Godesses known for her intellect guards the royal treasure. Would love to visit someday!

You did a great justice with those
pictures... For those of us who live nearby, we often take things for granted...

And what did you think of the Readers Studio???

WOW how amazing is that !! what an entrance !!

Intuitive Goddess, I enjoyed the Readers Studio very much! I wrote a few posts about the conference -- if you want to read them, just click on "Tarot" in the Labels cloud on the sidebar!

Wow, those doors are stunning. totally inspired before you get inside

oh my..how lovely...did you know there is a huge park in brooklyn? smack in the middle of the city is a 200-hundred acre forest..and that is only a fraction of the flora in Prospect Park. The masterpiece of the landscapers olmsted and vaux. just, and i do mean just read that in a book.

I for one would love to see this entrance someday. What an awesome sight..

Wow! What a flash entrance just for a library!!! I don't think there's anything near as magnificent as this in Perth, Western Australia where I've lived most of my life. Awesome photos! Liana.

Gorgeous! Would love to visit there. Whole lot prettier than the library I visited today, that's for sure.

I was born not far from this library and as a schoolboy, spent much time in the Ridgewood branch. Awesome. The things you learn to appreciate later in life!

:O My word that is STUNNING! And never mind the simpler construction - it only serves to highlight the splendour of the entrance. Athena is magnificent and now I simply must see it in person!