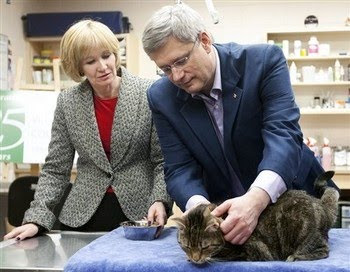 Hello. Her Royal Highness the cat here. Today I'm flying to London on Air Canada. I had originally hoped to go with the Prime Minister and his wife in their private jet but that fell through. They had to turn down their Royal Wedding invitation and stay in Canada because of the imminent federal election. So now I have to mix with the great unwashed on The People's Airline.
For the information of non-Canadian readers, the man in the photo who is apparently strangling the cat is Canada's Prime Minister, Stephen Harper. His wife Laureen beside him is such a sweetie though. She fosters kittens for the Humane Society. How he lucked out and married her is anybody's guess.
Posted by Debra She Who Seeks at 05:30

Doesn't surprise me that he's trying to strangle the cat - he's been trying the same thing with parliament in the past five years.

She is a lovely lady, you really have to wonder don't you? And you'll notice I had the good taste not to refer to any rumours that are going around.

Oh voting is so important, I can see why Her Royal Highness is staying home for this important event. She is in good company. I have a photo of my husband meeting the PM too. I wonder if Laureen hangs out with the cats on Parliament Hill? I bet she does!

Perhaps the flight won't be so bad. I always tell my clients "Think positively."
Mary

When I inevitably turn up at the gates of hell, I fully expect them to direct me to a private jet where I get to spend all eternity breathing in recycled air and making small talk with Stephen Harper. Her Royal Highness got off lucky!

i forgot how much i missed Canadian politics until i read this.

Laureen Harper and Laura Bush remind me of each other, in the whole, how did those men snag these women vein.

i take the unwashed people lol

superwoman here...yet another rescuer of cats and dogs...will you be traveling with Her Highness? or is this a solo (so beneath her her) cat flight??

Oh no, Laura, HRH is going solo on this one. I have to stay home and watch on TV with the rest of the peasants.

just call for wills' chopper to pick you up and bring you back, hrh! :)

Have a wonderful trip!

That kitty thinks someone is about to take his/her temperature. A little anxious...

That's a pretty content cat for being strangled an all.

Be sure to take a hanky lightly spritzed with catnip to cover up the odor of the great unwashed.

ah, I wonder what will the First Kitten wear at the Royal Wedding?

Has HRH contacted the Governor General? He's heading over later this week and as far as I know, he doesn't strangle cats.

I will be pvring the wedding and watching it when i get home from bootcamp. I can't wait. I love weddings.

How dare the Prime Minister for not taking you to the Royal wedding!! I know traveling via public transportation was a tremendous strain for you. I hope you carried perfume to mask the smell of all those unwashed people!

HIS wife sounds like alovely person. How does she do it? (ie put up with him) Persoanally I'm happy knowing you won't have to travel with him, your majesty

Dexter is still waiting for his invite.