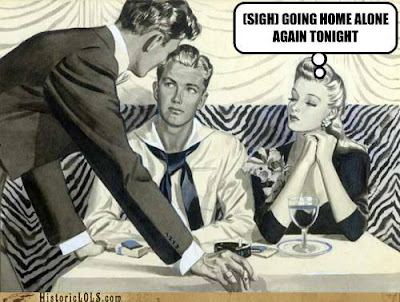 I read once that the Village People are the world's greatest pitchmen because they successfully persuaded the American public that their song "In the Navy" is about patriotism . . . .
Sailors are featured as gay sex icons in the following short clip from the wonderful 1975 British movie, The Naked Civil Servant. This poignant yet fun film is a biography of Quentin Crisp, the "Stately Homo of England," who was openly homosexual in the 1930s and onwards. John Hurt is brilliant in the title role. If you ever get a chance to see this movie on video, please do so -- it's a treat not to be missed! Ooooo, ducky!

I'm going to have to see that!

LOL. .the Village People were quite a phenomenon. .think about it. .what wedding reception didn't have everyone up and dancing and going through the arm motions of Y-M-C-A? And years later, my young granddaughter coming up to me, all excited, because they played the "funnest" song at her roller rink, and went through the motions while singing it to me. .and I still remember the delighted shock on her face, when I already knew the song! lol

And I remember watching The Muppet Show, with my kids, and seeing the toe tapping, (and in my kids' cases, jumping up and dancing) Viking Muppet version of "In The Navy".

The Village People were brilliant! They had most of America up and joyously dancing, without really knowing what they were celebrating. I miss them. (and their sexy butts! lol)

I'll have to find a copy of that movie. From that clip, it looks like it is a good one! Thanks for the recommendation!

I loved the Village People. They were some special group.
Mary

it looks delightful!...the village people were so funny and enthusiastic that everybody loved them....we still do!

Village People=amazing! I thought that movie clip was soooo sweet. It almost made me cry. "It was the the first and only time in my life I was the center of attention and didn't feel like I was in danger." How sad. I have a friend who has been the center of attention in bars a couple of times until some group of guys realized it was a man in drag they had been flirting with. He's been assaulted for being gorgeous in a short skirt--dumbass rednecks who aren't comfortable enough with their own sexuality. Heartbreaking. I will have to watch this movie for sure.

I'm going to have to hunt that film down.
I once had to have a long discussion with one of my friends from the midwest in college about the village people. After soliciting the help of some of other (male0 fashion design students we were finally able to convince her that on average sweaty Cherokee warriors in full headdress didn't tend to wax patriotic about the US armed forces. The look on her face when she finally got it was priceless. A week later we took her to her first drag show at a local gay club. She had the time of her life. And thus started our college journey as 2 straight girls in the middle of teh gay, lol. It was some of the best times of our lives...
Oh and ever since I made the hubby watch that public service announcement you posted ooh ducky has become a regular part of our conversation, lol.

who doesn't love the village people..? no body..that's who.

he he we really need to find ourselves some sailors :)

This w/e we will be watching this for sure, DSWS....can't wait!

We haven't seen this yet, but plan to.
May even do a post about it.

Ducky indeed! I had a dream like this once, ah...never mind.

Unfortunately I can't look at John Hurt without thinking of that baby alien bursting out of his stomach...sigh. Scarred forever!

At the YMCA...you know you will be responsible for this playing over and over in my head now. checking on all your other posts, sorry I have not been around much. hugs to you.

I saw this movie years ago. The clip you posted captures the overall feeling really well. I thought there was such an aching lonliness in him, a longing to connect with other people, it resonnated with me as it would with anyone who has never quite 'fit in'.

I had no idea until today what "in the navy" really meant. Yes, the Village People did do a mighty fine job convincing people it was a patriotic song!

As for Quentin Crisp, I think of him often while cleaning house. I saw him interviewed after "Orlando" came out and remember him saying he needed to live only in a bedsit because what on earth would he do with more than one room - he could only be in one at a time anyway. And the man didn't do any cleaning in his room.

It's been so long since I've seen that movie, I must hunt it down again soon.

Thanks for the tip. I'll look it up.