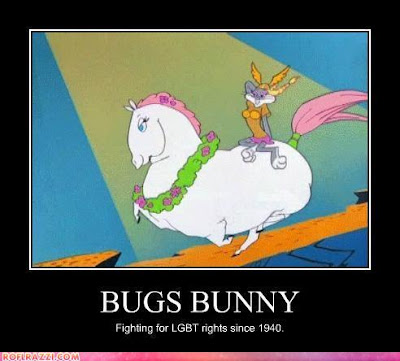 Speaking of celebrities who have fought the good fight over the years for transgressive lifestyles and values, we must not forget Bugs Bunny. How many times did he show up in drag to seduce poor old Elmer Fudd? Or lay a big sloppy kiss on some befuddled male eedjit? Bugs was never afraid to shake his tail in a sexy dress!
I read somewhere once that Bugs Bunny is a classic trickster figure like those in Greek or Norse mythology or in traditional aboriginal teachings. He is an unpredictable catalyst for change who is always causing trouble and shaking up the status quo. And like many trickster figures, he shapeshifts with ease across the borders of gender -- sometimes male, sometimes female. Restrictions like gender are meaningless to tricksters. As with shamans, they "walk between the worlds."
Bugs Bunny was my favourite cartoon character when I was a kid. And I love him/her still! 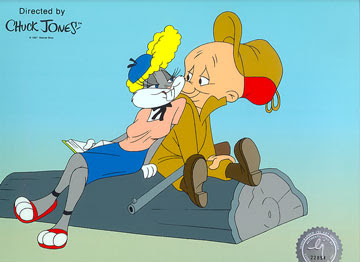 I love Bugs Bunny too,, I never knew this,, interesting,,

When you page came up, and I saw the cartoon, I burst out laughing. .Bugs Bunny and his friends were my favorites, both in comic books and cartoons (back in the 50's, before illustrations and animations were victims of budget cuts.) And I continue to love watching those classics!

Somehow he escaped under the societal radar about subtext and innuendo, and enjoyed a freedom so rare in those days, to simply be who he was/is, and be totally adored in the process.

"your". .not "you". .shouldn't sip my Kahlua over the keyboard. .I can never stir it without an ice cube escaping the glass. .makes for sticky keys! lol

I never knew this either.

Bugs has always been one of my faves. Thanks for this bit of interesting info.
Mary

ha-ha-ha ;) Only you Debra would connect our Mr.Bugs and Elmer Fudd with being a gay trickster, I love it...Bugs is way over most children's understanding with his wit and I enjoy his antics and trickster personality much more now as an adult.

Favorite Bugs line: Bugs was watching a t.v. game show and the host asked the contestant this ridiculous math equation and Bugs answered it right away. He then turned to us, the viewers and said, "If there's one thing we rabbits can do, is multiply" ;)

Bugs is the best!

Eris is probably the closest thing to a trickster in Greek mythology (she initiated the dispute between Hera, Athena, and Aphrodite that eventually led to the Trojan War, for example), but she never cross-dressed.

Bugs Bunny was my introduction to opera and classical music and I've loved it ever since. As an adult I've noticed a lot of gay references in there, such as the wedding scene with Elmer Fudd in Wagner's Der Ring. Not to mention cross-dressing. A lot.

But I never got the trickster aspect of it. Thanks for that. I've had a fondness for Loki since I was a kid. No wonder I loved Bugs so much.

Hi -E-: Doesn't Hermes sometimes have trickster attributes? True, he doesn't cross-dress but those winged sandals definitely qualify him as being light in the loafers.

Is there anything really to suggest that Bugs Bunny wasn't actually a woman? I mean, how do we really know if he was a male bunny? Either way, I love the subversiveness of this idea! Bugs broke all the rules and I love her/him for it.

I am going to be a geek here for a second but I love the quote from Garibaldi from Babylon Five when he refers to Daffy Duck as "the household god of frustration". OK, I'll stop being such an uber geek now.

I never thought of BUgs that way before...but no wonder I love him, I adore all trickers of lore.

I never thought of that before.....secrets in the old cartoons to discover....nice analysis!

I can't hear classical music without chanting 'kill the wabbit' in my head. Bugs is da man..or da woman...pretty much whatever he wants to be, lol.

bugs and crew capers were depicted as 'tongue in cheek' so censors never fully caught on... a lot of that in comix, too....

I never thought of Bugs as a shape shifter/trickster. Makes sense though now that I think about it.

My daughter The Heir thinks that Bugs's gender-bending is the reason you don't see him on t.v. anymore. Thank you for making my evening. "What's Opera, Doc" is one of my two all-time favorite cartoons ... and we at "The Gods Are Bored" do hereby recognize Bugs Bunny as a Trickster First Class!

PS - if you can ever get your hands on a copy of Mel Blanc's autobiography, it is just fascinating.

Debra, you always put a smile on my face and I adore you for it! Guess what? I just signed up for two workshops: Movies in New York and Gay Identity Literature. Now I have some quirky media stuff to talk about!

How'd he get those boobs in the picture? Perhaps hermaphrodite? Hmmm...

What's up doc? Hmmm. Now I'm wondering about that too.

I remember a Honey Bunny, and there were a couple of others, but no long term girlfriends. .you know bunnies. .they like to hop around! Besides, would you want to date someone who looked better in a dress and long eyelashes, than you do?

I think Hermes is considered to be both sexes, male and female. Ze is not one or the other.

What? I never knew this. Obviously I haven't watch enough cartoons!

Suzie said: 'I remember a Honey Bunny, and there were a couple of others, but no long term girlfriends'

I would say Honey Bunny is a very long term girlfriend of Bugs Bunny. She first appeared in 1966, she was present everywhere but animation, and in 1996 she got updated to Lola Bunny. So she's with Bugs Bunny for 46 years! What a faithful girlfriend! :D