Following the death of Carol Shields, the City of Winnipeg and the Province of Manitoba wanted to publicly memorialize her in a fitting manner. The Manitoba Labyrinth Network agreed to fundraise and oversee the design and construction of a beautiful labyrinth in King's Park near the University of Manitoba.

Major funders of the project were the City, the Province, the University of Manitoba and many local and national corporations, along with Carol Shields' publisher, Random House of Canada. But a long list of ordinary citizens also bought "donor bricks" which now form part of the labyrinth's walls. My Rare One and I each have a donor brick at the labyrinth. 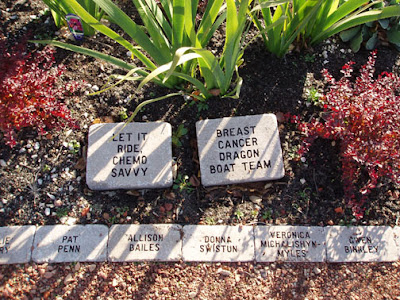 As you can see from this photo from the Carol Shields Memorial Labyrinth website, breast cancer groups were also involved in memorializing her.

The labyrinth was officially opened in May, 2009. I was finally able to visit and walk it last summer.

love the idea of donor bricks!

There must be so much POWER there!

Awesome Debra. Did you have breast cancer? My wife had a tumor removed in March and then did 35 radiation treatments. Chemo was optional for her so "we" decided, based on the odds, the benefits weren't worth it and declined it. So far so good, but fingers are crossed.

Hi Barfly -- My Rare One and I donated our bricks as Carol Shields fans and labyrinth fans, not as breast cancer survivors. But many "breast friends" did contribute bricks. Best wishes to your wife and may all turn out well for her and you.

I love the idea of leaving the stone offerings in the center, that you've wrote about before and leaving donor bricks sounds like such an amazing way to honor someone.

Its nice to hear all those people and orginizations could pull together to do that! I can't wait to see your walk through the labyrinth!!

this is so cool. can't wait to walk the labyrinth!

I can imagine, Debra, how moving and yet exhilarating that first 'walk' was for you.
What a lasting tribute to not only a great human being but also to the awareness of breast cancer and the need for a cure.
Lovely and moving post.

I love the idea of the stone offerings. Wish I could visit one day.
Mary

A wonderful way to memorialize someone like Carol Shields! And the donor bricks to be used as the walls are a great idea. :0)

Now this is a sacred way to honor someone's gift to the world. You just have the most wonderful labyrinth's around you, Debra. Maybe I'll be able to visit one, some day.

What a brilliant memorial.

What a beautiful tribute. I love the idea of donor bricks. How wonderful it will be when breast cancer is finally cured.

A wonderful way to honor the woman herself and to pay homage to other women who have faced this disease.

This is so special! I would love to walk it. I might have to take a trip.

That is such an awesome tribute!!

That must be a very special place. So pleased that you were both able to donate a brick to such an important cause. Also happy that so many different groups came together. The power of one woman!

This is such an inspiring way to remember someone who touched a community (and a country.) I have to head to the library this week and track down Carol's books!

Oh how interesting...thank you for 'introducing' a fascinating woman.

Awesome bricks! Are you the "chemo savvy" one?

That is such a good idea. I love the idea of the donor bricks .

Hi Riot Kitty -- No, none of the bricks in the photo are mine or My Rare One's. But I love the "Chemo Savvy" one too -- what a great pun! It shows the sense of humour that helps carry women through the ordeal of breast cancer.