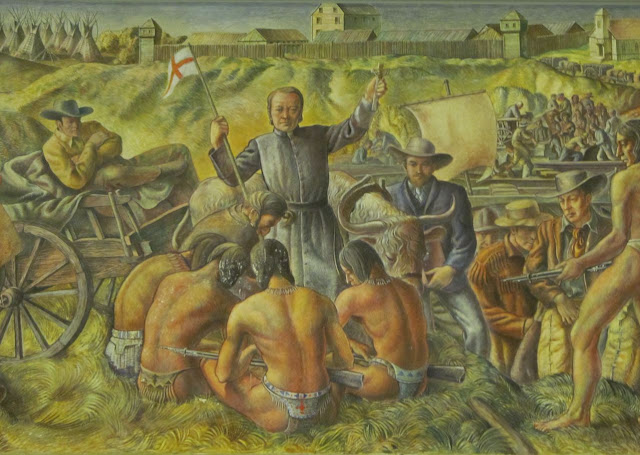 Interpretation: The Heirophant card is all about obeying rules and regulations, the status quo, conventional morality and conformity. The Heirophant is an authority figure who sets and enforces these rules. This card can indicate an external controller like a priest, judge, doctor or parent (for example) but can also represent our internal voice of control. What do we really believe?

Image: In the Rutherford Library at the University of Alberta, there is a huge mural painted in 1951 by H.G. Glyde, one of Alberta's most prominent artists. It focuses on the history of Fort Edmonton and the fur trade in the early 1800s. Unfortunately, the mural reflects the racism common to earlier eras by depicting a Catholic priest "civilizing" the indigenous natives with the Christian religion. It perfectly illustrates a controlling Heirophant who arrogantly imposes his beliefs and opinions because "he knows what's best for you."

Oh, I love this mural. You live in a very special place.
Mary

It is a beautiful mural. It clearly depicts the arrogance at that time.

The mural provokes such conflicting emotions. Great post, Debra. Really got me thinking.

The Heirophant is such a drpressing card, in my eyes anyway. He represents everything that silences the female voice. Example: Women should be banding together fighting for more gun control in Canada as well as in the US, not buying into the culture of violence.

My life is littered with would-be Heirophants! There's no shortage of them.

Interesting that this card can also represent our own inner-voice of control... that's where things can get confusing - who's voice am I really hearing?

I imagine he's not telling those men a whimsical bedtime story, is he?

Wow, I haven't been here for awhile. Love your tarot. And this is quite the Christmas Blog, just in the season as I see it too. Happy Holidays!

the Heirophant card is one I have bristles to as well. but then I feel like that's a good thing. I've never been one to accept the status quo and believe in shaking it up....Great mural. There is a similar depiction in Santa Fe with the indigenous peoples being "spoken to" by the good friars. Excellent correlation...because it makes me bristle too.
Oma Linda

Ohhh I'm such a rebel these days, I can really relate to this card. Although the image is quite sad, isn't it.
thanks - very cool post!
peace

I love that you're doing this!

That mural makes me angry. But its much nicer to think of it representing the internal voice of OUR control. The other voices of control make me angry too;p but I've always been a rebel, heehee.
Jane brings up a good point too, who are we really hearing?
Hmmm...lots to think on!

Isn't it amazing that the "control issue" has been around since who knows when. I'll bet cavemen tried to control the Saber Tooth Tigers with chants and spells..... (O:(O: What do ya' think??

Makes me kind of sad...but really makes me think!

That certainly looks like a Heirophant! My boss is an insane one. sigh. Maybe they are all nuts. Lois

No man knows what's best for us!

...of course, little has changed over the years, make that millennia, 'they' still 'arrogantly impose' their 'beliefs and opinions' on the rest of us, cuz they 'know what's best for us'!

Lucky that mural in not in Ottawa it would have been pulled down a long time ago by the Politically correct police. I wonder why it is still hanging in a public place.

I bet in all the times I've had my cards read, that card never came up.

A very sad mural, but it gets you thinking about a lot of things!

A very aptly chosen picture for that particular tarot card!