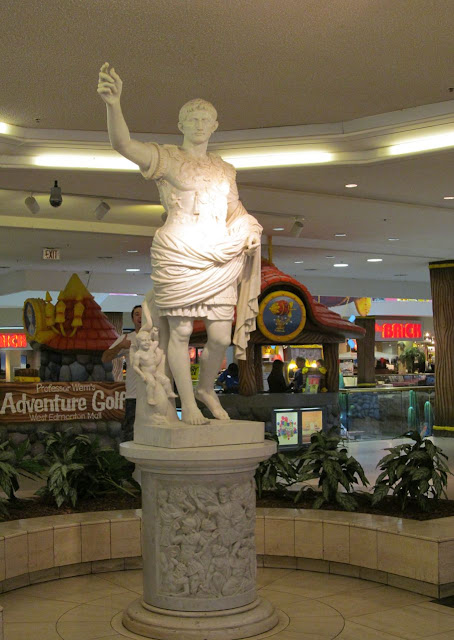 Interpretation: The Emperor card represents the Divine Masculine, he who is the quintessential leader, doer and creator of worldly success. A wise Emperor creates stability and peace for all. He uses his dominance to advance well-being. This card very much denotes "Reason over Emotion." The Emperor is concerned only with external reality. He does not delve beneath the surface to explore what is there.

Image: Mighty Caesar once ruled over the known world. Now he rules over a tacky food court at West Edmonton Mall. Oh well, at least it's North America's largest mall. That's still something.

He certainly lends an air of opulence to the lowly food court!

ooh, I want that statue in my hall!
PS Debs, I've added the link to the pics of Anne's Hathaway muff accident from LES MISERABLES premiere in my post :) She really didn't wear underwear lol

I'm really enjoying your capture of the tarot, while out and about your city....very cool. Oma Linda

Just like a rock star - first they play Madison Square Gardens then they are relegated to playing county fairs....
I'm enjoying this series tremendously! It has made me want to become familiar with the tarot and find my own 'deck' here in Denver!

Better a ruler of something tacky than nothing at all!

So that's where he's been hiding out!

You just made me want to read my own cards tomorrow!

We are so in need of a few 'Wise Emperors' in this world!!
Edmonton Mall.....I remember seeing only a very small section....it even has its own beach for heavens sake!!

What is the Divine Augustus doing in a Mall. This is the famous statue of Augustus of Prima Porta portraying him after death, this is why he is bare foot.
The original is in the Vatican Museum in Rome.

I thought it was pretty amusing having Cesar in front of an ad for golf ;) How the mighty have fallen!

I think I'd rather dive deep...

Caesar is at the West Edmonton Mall? I thought he only hung out at the Caesar's casino? LOL! Great post ;o)

This statue of Octavian known to us as Augustus, the first Emperor of Rome. He was the nephew of Julius Caesar and his heir. His wife Livia had this statue made after his death and it was found at her summer villa just outside Rome at Prima Porta. The original is quite beautiful and full of majesty. The little putti is the image of love.

i think i tried to kiss him the last time i was at the mall.

Hey, Augustus, one of my favourite emperors and historical figures!

wem is NOT, even remotely:

Oh okay, then, largest shopping mall in North America -- you just made Caesar cry, laughingwolf. I hope you're happy.

I haven't been the THE Mall in a few years. I wonder how badly it's deteriorated from it's glory days when you could cut a record, watch the Oiler practice and race around those little motorized carts like maniacs until they rovoked your priviledges like you are in some third world country....oh I'm sorry. Got off track there a bit.

tell im to tough it out, he had his turn in the biggest

i lived about half a mile away while wem was being built... pain in the ass, traffic-wise... among the first to go there upon completion, tho
lol

Sweet. Octavian or Ceasar ~ a strange sight to see in a food court. God of Grease? Have a good one, L.