This very British-looking castle tower was built as a monument to memorialize the Battle of Stoney Creek. Battlefield Monument was officially dedicated and opened to the public on the centennial of the battle in 1913. 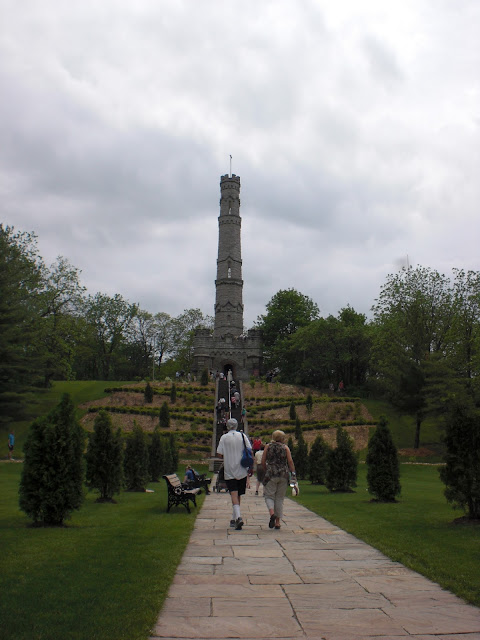 Battlefield Monument is located on a rise behind Battlefield House, the restored two-storey home where the Americans imprisoned the Gage family on whose farm the battle was fought. This photo of Battlefield House was taken looking down from the Monument. 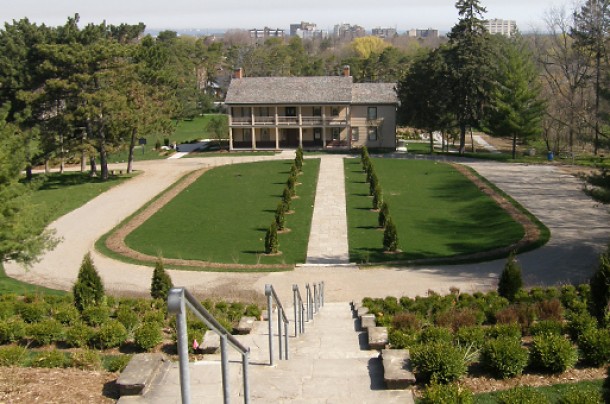 Here's the Monument as photographed through a window inside Battlefield House . . . 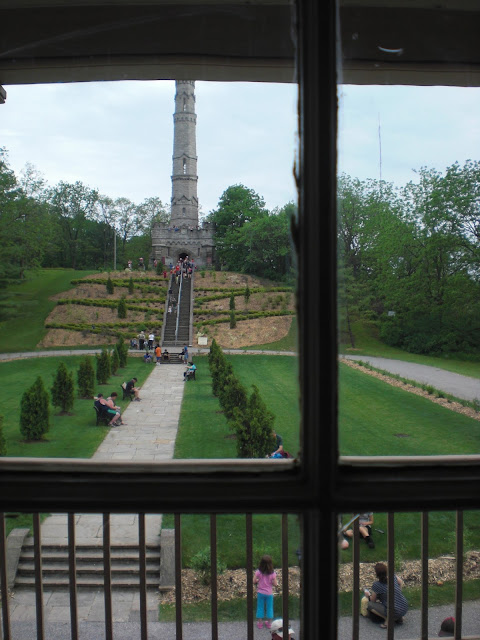 . . . and as it appears behind the battle re-enactment field. 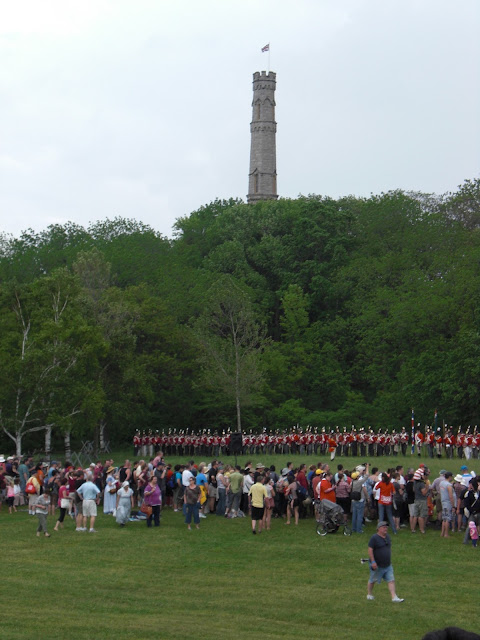 [Photos by Debra She Who Seeks, except for photo #2 which comes from the internet]

I'm really enjoying this "visit" to Canadian history. Someday I will visit for real...

what a beautiful place!

such a lovely tower it is!

Once again great photos! The memorial is gorgeous in its own way. And the grounds are beautiful! Reminds me of the area where the Battle of New Orleans took place - a large plantation style house & a large very tall monument. Are there stairs to the top of the monument and can the public climb to the top?

I was trying to imagine myself being a member of the Gage family at that time.....but I couldn't for fear of minimizing what they felt.

The Gage house is beautiful. It's hard to imagine being a farmer, minding your own business and then being in the midst of a war with the enemy imprisoning you in your own home while a war destroyed your land.

Jeanne, the public can access the lower battlements part but are kept from climbing right to the very top.

What a gorgeous memorial! The tower is so cool. I love the landscaping on the grounds too.

What an amazing place. And what an incredible tower. I'll have to visit if we ever head toward that area. And take a gazillion photos!

I've just read all 4 posts on this topic, thank you do much for sharing, it makes me want to do more research!

Have a great week!

What a beautiful place. Very cool monument and the grounds look amazing.

Ha ha It looks like the battlefield is surrounded by farms and grazing cattle. Anyway I'm getting more and more ashamed that I haven't seen those monuments. Am learning a lot - and your photos are beautiful!

And today we're all friends. How fucking weird is that? We kill each other and now we are tourists.

What a nice place. Taking care to make a memorial site so beautiful is a meaningful way to pay tribute to the fallen.

This series was fascinating, Debra. Thank you for sharing this.

Wow! That's a gorgeous place, I need to go there and have a visit!

Those first few views are pretty cool, but that shot from the battlefield is just plain awesome.

I love these pictures! The Monument is beautiful and the house and grounds are so pretty!

wow look at all the people!

Looks like it's still in pretty good condition given its age. That's impressive.

I love reading and learning about Canadian history..and in a way it is some of America's history too..but we come out looking like assholes so they don't put it in our history books.

ya see the trawna one... casa loma?

Can't tell you how much I liked your posts about the Stoney Creek Enactment. Wish I could have seen it too!
I found a song on Youtube that I really liked.
http://www.youtube.com/watch?v=aMyoKJIxNY8
You know, I think it's important to search out all the songs in the world. God knows I'm trying!
In case my link does not work, it is "Stoney Creek" by Mark McNeil, I think is the right name.
Once again, great posts!!

Hi laughingwolf -- We didn't visit Toronto's castle Casa Loma on this trip but I visited it many years ago when I was a university student. It's really something!

Hi Kay G -- Thank you so much for finding this video! I love it and am going to post it on my blog next week! What a diligent researcher you are to have found it -- it never even occurred to me to look on YouTube for related music!

Now I want to go on holidays and pay attention to the history.
I love the sharp red uniforms.

Once again, I have thoroughly enjoyed another wonderful series that you so thoughtfully put together with pics and writings. (Bonus points to you for using "replete.") I had no prior knowledge about Stoney Creek, so reading about it, seeing pics of the reenactment, the memorial and the family tie with Samuel Green - well, I find it all quite fascinating and I thank you!