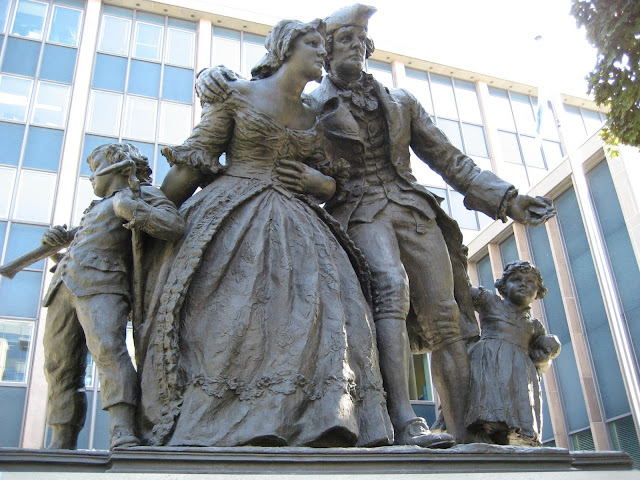 Two hundred years ago today on July 6, 1813, my great-great-great-grandfather Samuel Green died. He was a farmer and miller in West Flamborough, Upper Canada (today part of Hamilton, Ontario). Samuel belonged to a large United Empire Loyalist family which had fled to Upper Canada from New Jersey during the American Revolution. He was 43 when he died, leaving a wife and 11 children. Samuel died performing military service in the War of 1812 with his local militia unit, the 2nd York Regiment. His wife Margaret later received a war widows pension for his loss.

Most accounts say that Samuel Green was a casualty of the Battle of Stoney Creek which was fought during the night of June 5-6, 1813. Some accounts say he was killed in action but the later stated death date of July 6 would indicate that he must have instead died of wounds received in the battle. Or perhaps that death date on the pension application was simply a clerical error and "July" should have read "June." 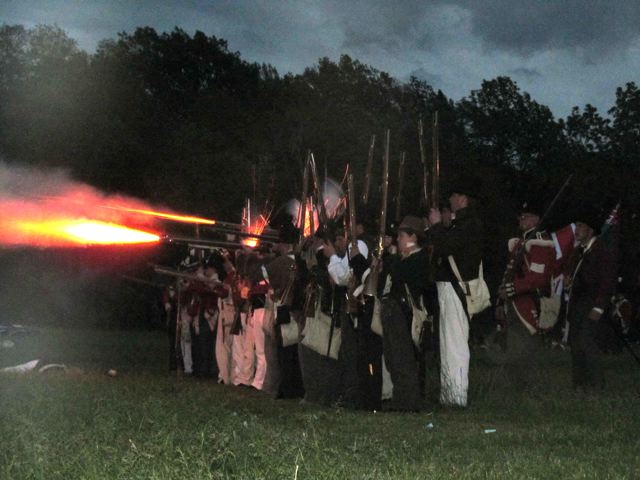 Or did Samuel survive the Battle of Stoney Creek but die performing another kind of military service? An entry in the Militia Muster Roll and Pay List of the 2nd York Regiment says a Samuel Green was paid for "batteauxing to York" from June 25 to July 6, 1813. Batteauxing was how the British moved military goods, supplies and ammunition over water from one strategic point to another by the use of large flat-bottomed boats. Did Samuel in fact drown in Lake Ontario or die accidentally while loading or unloading military supplies? The pay record itself makes no mention of death while on duty. Could it perhaps have been a different Samuel Green doing that job? Records were often spotty or inaccurate in those days.

[First photo of a Hamilton statue honouring the United Empire Loyalists comes from the internet. Second photo of militia re-enactors of the Battle of Stoney Creek was taken by My Rare One.]

I wonder if you and I are related somewhere. My mother's maiden name was Green.

it's nice that you know the history of your family, Debs! I don't :(

That second photo by your Rare One is amazing!!!!!

loved the story, Debs, wish I knew more about my family history

I love learning more and more history of Canada and of course finding out more about you as well. Great photos, Oma Linda

What Linda said. I really love reading about these events WITHOUT the U.S.spin on it. Thanks for sharing this.

That gave me chills. 11 children, wow, that poor woman... To live a day in her life would be incredible.

Great piece of family and Canadian history. The Video Cabaret group did a great piece here on the War of 1812 - as they say in it: After three years of bloodshed on land and lake, the Yankees have burned York, the Yorkees have burned Washington, and everyone has burned the Natives.

Love this! You're such a history buff! I learn a lot by reading your blog.

I love it when you talk history. It's always so cool to read about it.

Hey SWS! Talk about a lead sentence that grabs the reader! This was a fascinating post. It's sad to think about all the amazing family stories that have disappeared over time. I moved so much when I was in school that I never had Canadian history from 1812 on ~ lots of American though (how ironic). So I'm enjoying your and Francie's posts on Canadian history. I also enjoyed your previous few posts that I missed. The national canthem and dance moves were so funny. I was AWOL in the hospital. But I escaped and am doing fine. Have a wonderful weekend with your Rare One.

I just learned this week that the people in Maine, New Hampshire and Rhode Island (forget the other state or states) refused to send a militia to fight their 'friends' in Canada in the War of 1812! Many thanks to the good people of new England!

Good to have this info on your g-g-g-grandfather, Debra.You DO have a vested interest in the War of 1812...it's in your blood!

Love stories like this, it makes the past live for us.
Wonderful that you could attend the bicentennial ceremonies.

This is so much fun. I'm really getting to enjoy history. I did a another dog rescue, this morning, and listened to a radio program about the colonial wars and really enjoyed it. Looking forward to more...

I wonder where my ancestors were at the time.

Wow, that's quite the lineage!

dead's dead, no matter the how or the where...

Oh, how fascinating that you know so much about your ancestor's history and how heartbreaking for his young wife to find herself a widow with 11 children ! You must be proud of them !x

I love family history ... the past IS really alive.

History is fascinating. I think you are lucky to know as much as you do. Even with the questions still remaining you have the basics intact. WOW...left with 11 children. I hope pensions were generous. That is amazing.

I liked this post. It's interesting to me, as an United States citizen to read about a loyalist who left one of our colonies and moved to Canada in support of the English. I've often wondered what it must have been like for those who came here and wished to remain part of the Crown holdings. Our history is so caught up in the battle of Independence that we generally over look how those who wished to remain British Subjects must have felt.

That is really cool that you're related to a war hero, however he died.

PS Thanks for correcting me on the Canada Geese. Silly me. I've made the change in my post.

What a great story! How amazing to be able to research an ancestors history as your family has been able to do!

How interesting you are Deb. You never cease to amaze me with the variety of topics in your blog. I enjoyed this read for sure x

I love family history..I found out that my gggrandfather was a Texas Ranger..now that was cool.

Excellent to know so much about your family history! Very interesting!

@ Unknown -- Hiya, Cuzz! I also descend from Samuel's daughter Elizabeth, via her son Warren who went to Manitoba in the mid-1880s to homestead. That's why I grew up in Manitoba and not on the Niagara peninsula.