Aboriginal and militia casualties at the Battle of Stoney Creek were claimed by their relatives and taken home for burial. But British and American soldiers did not have the luxury of a return to their home countries. They were buried where they fell. 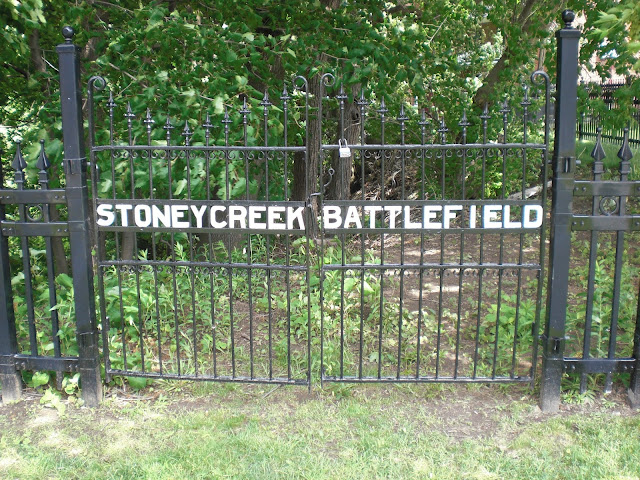 British and American soldiers were all laid to rest in mass graves at Smith's Knoll in Stoney Creek. Here is the British memorial, replete with cannons, the Union Jack, an impressive plaque and the imperial lion on top. 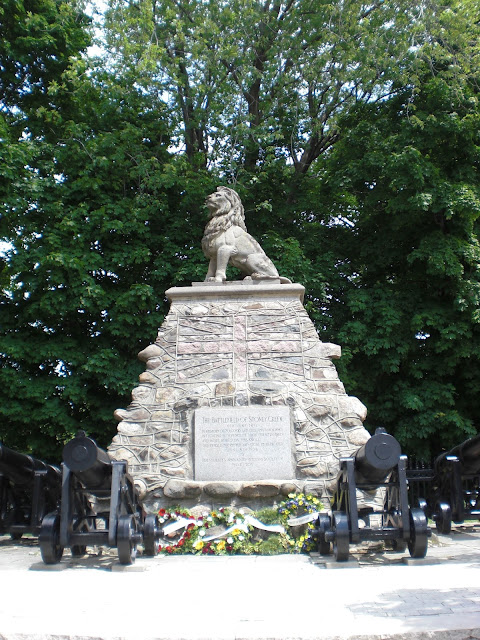 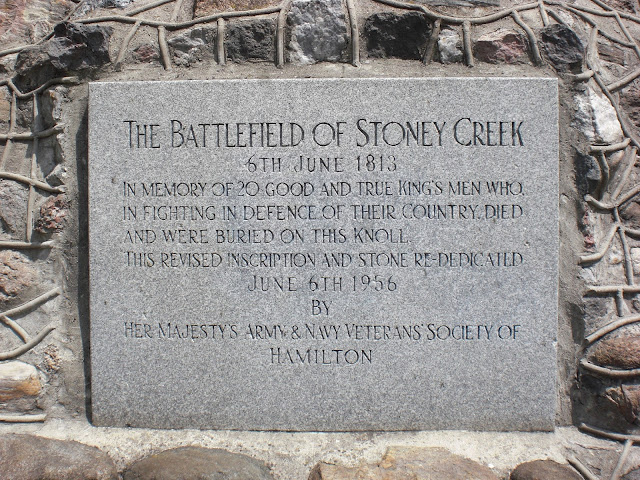 The American memorial was erected later and is much more modern in appearance. The fresh floral wreaths on both monuments were recently laid in commemoration of the battle's bicentennial. 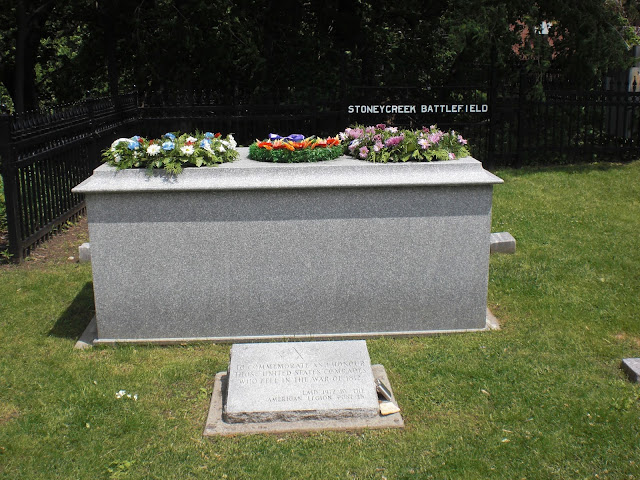 You can see that someone (an American re-enactor perhaps) has left a couple of tributes for the US fallen, including a flask undoubtedly used to toast their memories. 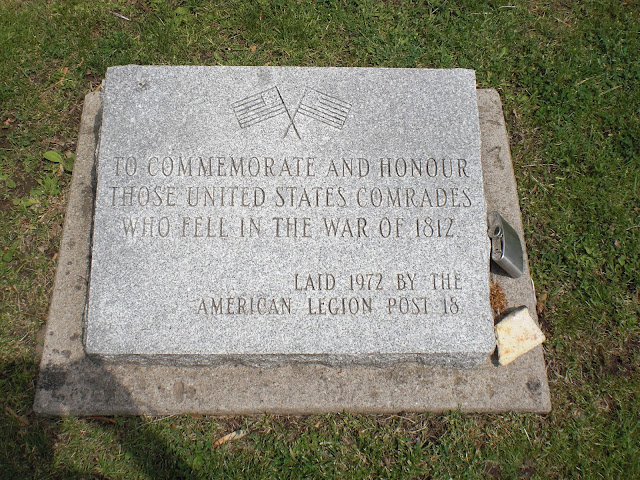 Although the plaque was laid on behalf of an American Legion branch, clearly it was engraved locally in Hamilton, judging from the Canadian/British spelling of "honour."

This is a sad and also very neat that you got a chance to take these photos.

PS: I loved your comment about fall ten times get up eleven. Great stuff. Thanks.

The detail in the British memorial is beautiful.

I enjoyed reading your last couple of posts on this battle. The world was a much different place then. It is wonderful that you were able to take these images too. I much prefer the looks of the British memorial.

It always is a sad reality that someone's loved one died away from home, away from his family, never to return.

The British memorial is really awesome! Its very sad to think about those families who were never able to pay their last respects to their loved ones who died in battle.

they all look fairly new despite their age. They must of taken very good care of the site.

War is such a horrible thing. And it is very sad when soldiers are buried so far away from home.

Buried where they fell? That's not very comfortingly. Cool place though.

This has been very interesting...war is horrible though!

War is so sad. For those buried where they fall, that's even more sad. Thank goodness there has been a memorial erected. I love the lion!

I've never seen those memorials Debra. I'll make a point of visiting them next time I'm in Stoney Creek. Great post! There was a repatriation ceremony a few years ago when the bodies of some American soldiers were discovered in Niagara. They came and took them home - after 200 years. Very touching.

I like the flask. It made me smile - kinda a way of infusing humanness and humor into something so tragic. Stoney Creek is a beautiful site, too.

Hi: It is always wonderful to see places that I have never visited. Thank you so much for the tour. Blessings, Martha

I certainly will make an effort to visit these sites in the [cooler] future. For me, they are right across town!

I would love to visit there.
Mary

Once again you have brought me to a place in history that I had just barely skimmed across as a student. I am very interested now and have done some studying since you brought the subject matter. Thanks, I'm always glad to learn something new.
Oma Linda

I could spend hours in graveyards looking at headstone and memorials.
It somehow puts everything into perspective for me xx

This has been an interesting series of posts.
To be able to trace one's relatives (and heritage) back that far is great! And I had no idea about the people who fled the USA for Canada. I do believe I need to brush up on my history!
I have always wanted to see a re-enactment. My sister does re-enactments - both civil war and mountain men rendevous. She has a blast. :0) Great photos!
The British memorial is full of character while the American one is quite sterile. {sigh} Sadly American architecture is not what it used to be.

That's so sad. I like the lion one much better!

Lest we forget these soldiers and our past.

War and battles are so senseless. So many lives get lost and many times it feels like nothing good comes of it! Of course these things will continue to happen and it is wonderful to see how people are memorialized. :)

Both memorials are so different! I have to say, I really think the British one is very impressive. I'm surprised about the American one.

war...what is it good for?
monuments.

I didn't even pick up on the spelling. I love the flask.