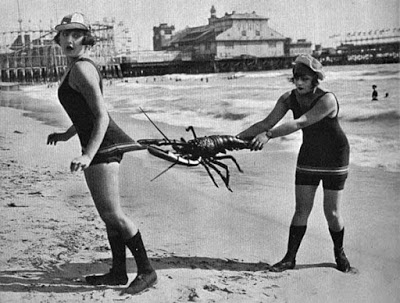 My Rare One and I had a fab time tootling around the Maritimes this summer! Here's an actual unretouched photo of us on a beach in Nova Scotia. We also spent some time in New Brunswick and Prince Edward Island. I'll be posting about a few of our adventures in due course, as soon as I figure out how to download the damn photos from my new camera.

Right before I went on my blogging hiatus, that wild 'n crazy Australian, Michael D'Agostino of A Life Examined, gave me a Creative Blogger Award -- wasn't that nice of him? I'm posting it a bit late, Michael, but still with heartfelt thanks! 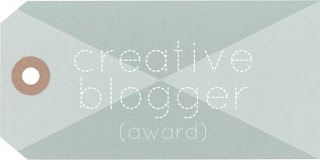 I'm supposed to accompany this award with 5 random facts about myself -- so here's some trivia from my summer vacay:

1. Of all the super meals I ate, the absolutely best one I had was some pan-fried haddock at The Knot Pub in Lunenburg, Nova Scotia. I'm not even much of a fish eater so you know it had to be stupendous to impress me that much! 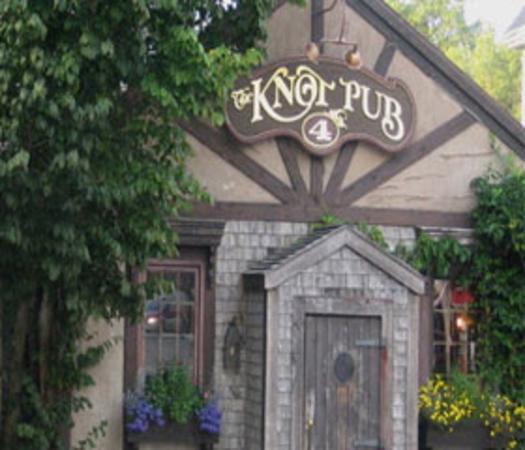 2. Our visit to Halifax, Nova Scotia happened to coincide with that city's Pride Parade! We enjoyed watching all the shenanigans while sitting indoors on comfy couches in Halifax's spectacular new Central Library.

3. We drove over to Prince Edward Island on the Confederation Bridge, a modern Canadian engineering icon. You don't have to pay a fee to cross the bridge and enter PEI but when you leave, you have to pay a toll then. We left the island by ferry but they still shake you down for the bridge toll, of course. There's no escaping the tax man. 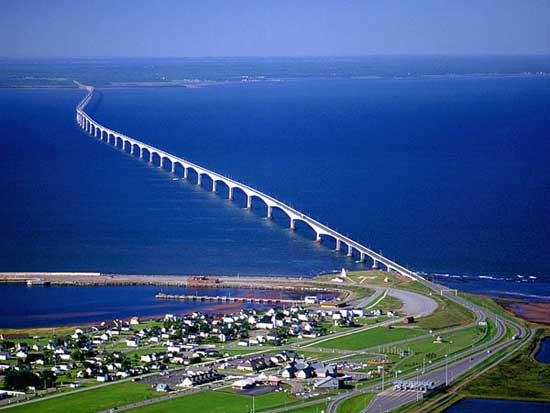 4. One of the things we did on PEI was attend a ceilidh! In case you're not up on your Gaelic, a ceilidh (KAY-lee) is a Maritimes song and dance party featuring traditional music. This particular ceilidh had great celtic music, some good ol' timey country music and some amazing Acadian step-dancing. My gawd, it was a high energy performance! We were exhausted just watching it. 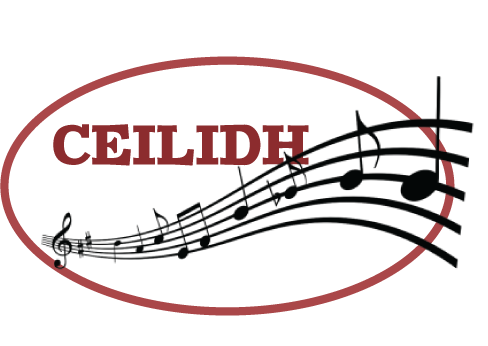 5. Every single day that My Rare One and I were in Halifax, we ate a "Killaloe Sunrise" Beavertail pastry. Now I'm home, my pants are tight and I can't figure out why? 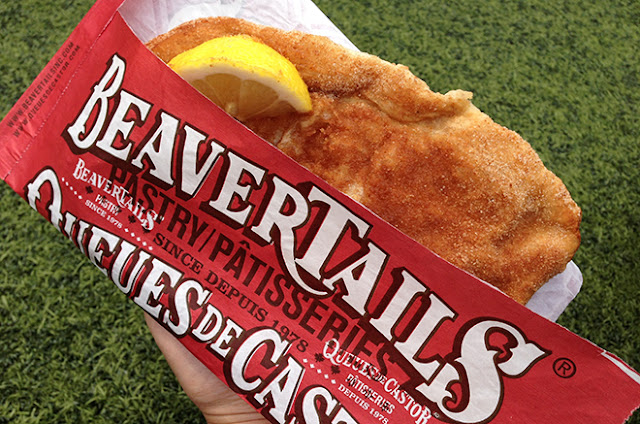 My next task is to pass on the Creative Blogger Award to other bloggers -- which I will do in the next post, because this one is getting too long already!

congrats on the award; good to have you back!

I missed you! That first photo cracked me up.

Well done for the award. Damn that pastry looks good! I know all about pilling on the pounds whilst away on holiday. Only problem is I'm not losing them when I get back to normal living. Whatever that is.

Glad you had fun!!

Yeah, those types of islands always make you feel so welcomed then when you try to leave, they get ya. That's why I only travel by jet ski.
How is the pronunciation of ceilidh correct? They're ignoring like five letters and inserting another baker's dozen to make that pronunciation work.
Looks like you had fun!

twas the longest absence I remember from you :) The bridge and the pastry look lovely!

I knew something was missing.
Did you look for the Trailer Park boys while in NS?

So glad you're back and had a fun vacay!
That library is soooo cool looking! Yes yes the PEI bridge, too, but I'm a library nerd.

I did miss you!!! Looks like you had a wonderful time, those beaver tails, are deadly lol,,,,
I was wondering if you drove across country or did you fly,,,,,

Welcome back! I have missed your posts! Don't you just LOVE Halifax? My goal in life is to retire there...I fell in love with the whole of the east coast. Aren't beaver tails delicious and don't they just taste like more? :) That bridge is spectacular. Never did get to PEI but that's next on my list. So glad to have you back. Can't wait to see some pictures....

Laurie -- we flew to Halifax and then rented a car to drive around the Maritimes.

Sunnybrook Farm -- yes, we did see the Trailer Park Boys! They send their regards to you and a kilo of Ricky's finest weed!

Sounds like a good trip. Sitting indoors watching a Pride Parade is the best way for old boring people like me to watch a Pride Parade - especially in Houston iin the summer. I have done it that way myself.

This sounds like a wonderful vacation! The bridge is outstanding. I am so glad you are finally back!!! Congratulations on the award you totally deserve it. Lots of love!

welcome back! i missed you! you were in one of my all time favorite areas. i love the maritimes! i've never seen beaver tails served with lemon! can't wait to see pics from your summer!

Sounds like you had a great time! Can't wait to see some pics :)

Of course I missed you. But I am so thrilled for you and the Rare One's vacay to the maritimes. Looking forward to many more pix and tales of the adventures. BTW you two look adorable in the first pic for sure. xoxo Oma Linda

Welcome back Debra:)
both the bridge and the library look amazing!.. glad you had a nice break

Yay! You are back!

My daughter has been to countless ceilidhs. She has been Highland dancing since she were a wee lass. They are loud and very fun!

Welcome back Debra. Your trip looks amazing. sometimes we all need a break...Good for you. Thank you for visit and good thoughts.

Welcome back! Sounds like a great rip down east!

yeah, you're home..I missed you...and love the photos..cant wait to hear all about it..and that pastry looks so damn good.

Wow! looks like y'all had a great time. David would have a panic attack on that bridge. I would love it. Hell, he hates driving in Austin on the freeway overpass from I-35 heading west. I always have to drive there because he hates heights.
Congrats on the award. You deserve it. Oh, and welcome back.

You're back. Now my world makes sense again.

Welcome back Debra!
Happy to hear that your Maritime vacation went well.
Come back again now, ya hear!

It is lovely to have you back Debra but I have also enjoyed and appreciated you popping in from time to time over the summer months too.
We flew from the London via Glasgow to Hailfax many years ago and also hired a car to drive around Nova Scotia. We loved the quiet roads, the quaint B/Bs. My big excitement was seeing whales when we took the ferry from Digby Neck to Long Island and then on to Brier Island.
Hope you will show us some of your adventures from your trip.

I missed ya! nothing like a nice lobster! What a bridge - I'd be terrified crossing that :(

I've got already got the Creative blog award from two peeps, just in case....lol

Love your holiday highlights and you absolutely NEED to eat as much of the fabulous local delicacies you can while you get the opportunity, you can always skip a pastry now you are back home ;)

Welcome back! That bridge is very cool. The Beavertails pastry looks very tasty, well, you were on vacation, that's no time to count calories, having fun is the most important thing :-).

looks like a wonderful vacation! that library is unreal.
welcome back
blessings
~*~

Sounds like a grand summer, especially the festival on PEI

Well good to have you back!!! I have been out and about, off and on all summer too. I see you two were also antagonized by that huge lobster! My ass is still in recovery!!!!!! Looking forward to hearing more about your trip.
xoxo

YAY! You're back in the blogging world! Can't wait to hear more about this amazing trip!

Yes, I missed you! Glad you are back! Prince Edward Island? I want to go there too!! Take me next time!
Congrats on the award, much deserved!

You made me hungry with the pastry picture. Arrgggh.

Well now PEI seems to be the holiday destination this year! We were the last week of August and had a wonderful time. Loved it so much we're going back for another visit. Looking forward to reading your posts - we may have some overlapping stories.

And it great to have you back where you belong!

Welcome back! The bridge is amazing. I have been wanting to go on a cruise from Maine that goes to Nova Scotia since we are so close. It looks so beautiful. I just learned about beavertails a couple of weeks ago when watching a travel show that was up in Canada. That is definitely the type of goody I go for when on vacation. Looking forward to hearing more about your adventures!

Never been there and want to go more now that I have seen your pics. As Stan Rogers once sang, "I wish I were in Sherbrooke now!"

Did miss you.
the Ol'Buzzard

I'm going to have nightmares about that lobster! But gioddamm, I want one of those Beaver Tails and I don't even know what they are.

That bridge and the library looked amazing! And so did the pastry too I guess, but for different reasons :P

Yay! Glad you're back! That lobster picture, scared the bageebus out of me though! Sounds like you had a marvelous time!

Welcome back! I love Nova Scotia and PEI! My parents spent several months wandering all over the east a few years ago, and they fell in love with Newfoundland. It's very lovely out there. Glad you had fun!

Glad you're back, how are you? Did you listened to "Farewell to Nova Scotia" when you left?

Welcome back! What lovely vacay pics and those Beavertails look good enough to make forget how sick gluten makes me and gobble down about three!

You are very deserving of a Creative Blogger's Award! You have a real talent for writing, and I am always entertained by your posts.

what is in that pastry? You were gone a good number of weeks. I was wondering has anyone compared Canadian vs. American vacations? I think up north you take longer ones.

I had no idea you were blogging again. It seems the Bloglovin' bastards dropped you from my reading list or something *shakes fists and think obscene words*.

That bridge is impressive. Almost as impressive as the lobster... and the fact that you spent so much time eating beavertail *cough*.

You know, I would appreciate it if people did not use my photos without consent. could you either use the original photo with FULL CREDIT and WATERMARK or completely take it down before I send a DMCA takedown? The photo in question is of the new library original can be found here -> https://www.flickr.com/photos/ahelal38/15850956128/in/dateposted-public/

@ Helal Photo -- I removed the photo as requested. Thanks for bringing this to my attention.