Sail Away, Sail Away with Me

Like most Canuckians, I've spent a lifetime looking at this image on the back of our 10 cent coin. Behold the Bluenose, Canada's most famous ship -- 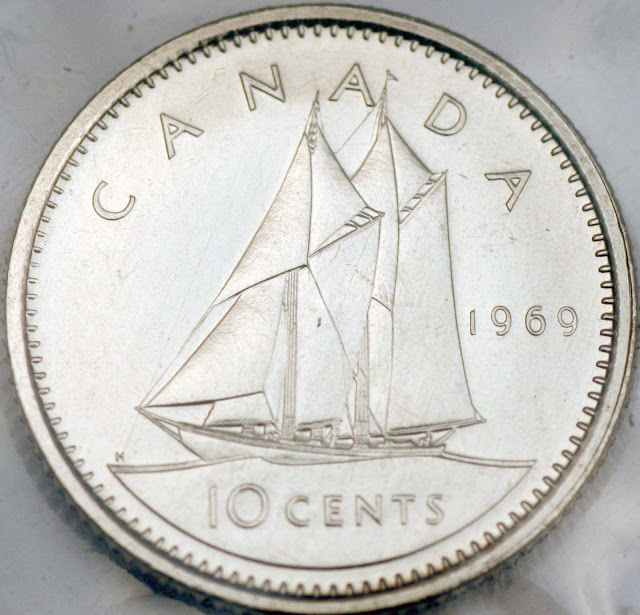 The Bluenose was built in Lunenburg, Nova Scotia in the 1920s as a fishing and racing schooner. During the 1930s, she was the undefeated North American sailing champion. But in 1949, the Bluenose was shipwrecked off Haiti while serving as a freighter in the West Indies. A replica built in 1963 was christened Bluenose II. A couple of years ago, the Bluenose II was completely refurbished, her beauty made new once more. 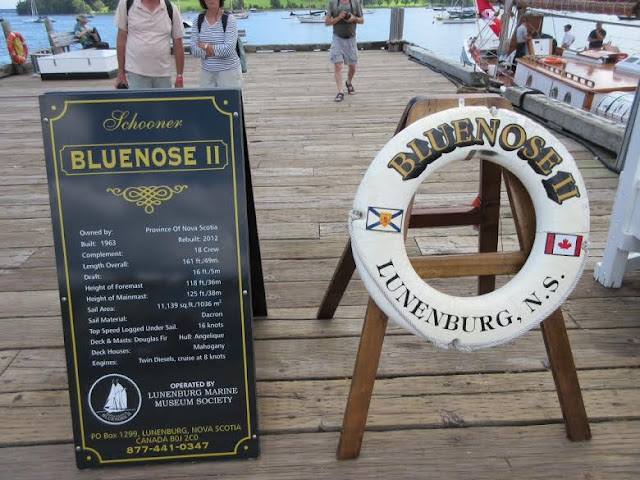 Even with her sails furled, the Bluenose II is an impressive sight. 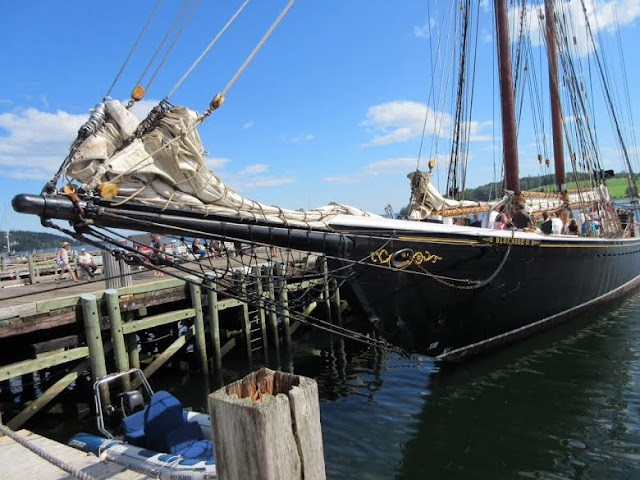 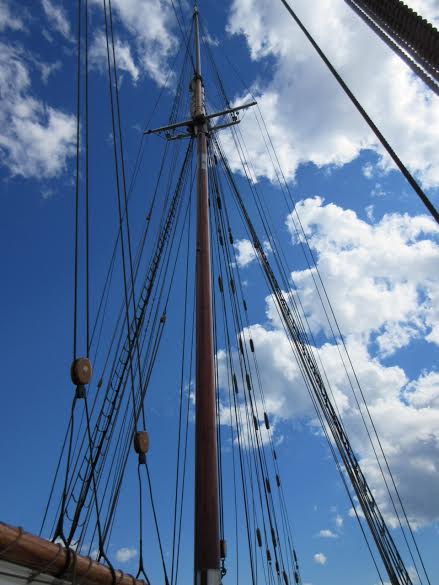 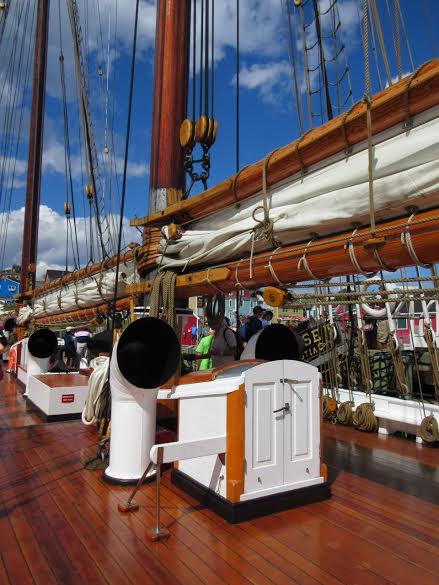 The public is allowed to go onboard (free of charge) at certain hours each day so of course we took advantage of the opportunity! 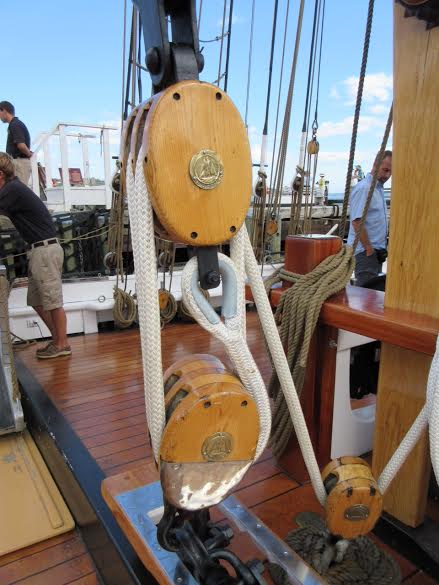 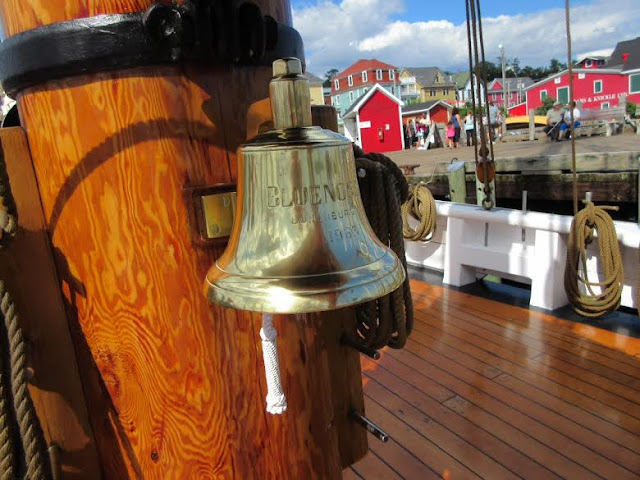 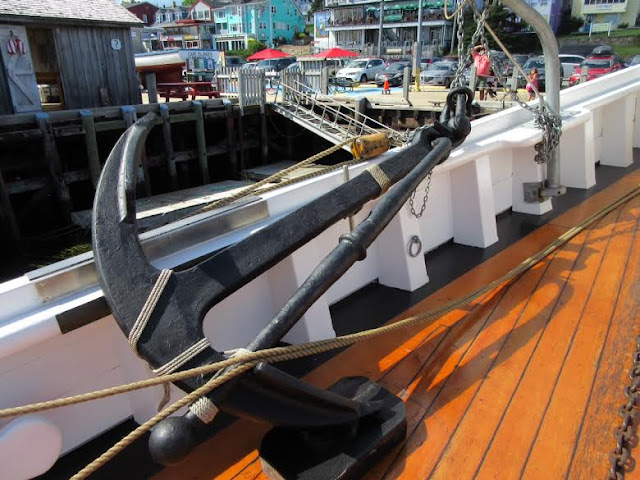 It was such a treat to explore this Canadian icon up close and personal. And yes, of course I bought a souvenir t-shirt. It was my patriotic duty.

[First photo from the internet. All other photos © Debra She Who Seeks 2015]

That's a really cool boat. I'd have definitely taken the chance to go on it too.

Neat! Although, even looking at a sailboat makes me sea sick. Also, now I'll have that song in my head for at least a week.

That is so cool! What a treat that was. And I love those coloured homes in the distance. Looks like a very interesting area.

That's a damn impressive vessel. I have to say vessel instead of boat, because I've been on a boat. It was like a tugboat made of rotted wood, and I don't know how it managed to sail without sinking, but it did. I assume your experience, even while docked, was a million times better than my own.

Such an awesome boat! I wish I was there!

Isn't Lunenburg gorgeous? And also the Bluenose of course. Good for you for getting a t-shirt and checking the ship out. She is a beauty.

I love, love, love the photo of the masts with sky and clouds. Inspires me to dream of amazing adventures.

i've spent a lot of those coins and never knew the story about the boat.

This land-locked gal has had a love affair with sailing ships most of my life. (Don't ask me why...I have no idea!) When I was a kid I made a model of this schooner. So sleek and beautiful!

It looks so majestic. And even Canadian money is prettier than US currency.
Congratulations on 7 years, Deb!

Love that you got to go on there free and snap shots.

Isn't she a beauty? We took advantage to when we were there and climbed on board. We loved Lunenberg and the Bluenose II!

She's a beauty..There are several of those in Baltimore Harbor.. I have a distant cousin who was Commondeer of the USS Constitution..a very famous civil war frigate..Interesting post..Have a nice week..

Great photos. How cool to see this iconic ship in person!

did you ring the bell?

it is a beautiful ship isn't it and so well maintained!!

Debra, what a great opportunity. Lovely ship!! Okay, when is the T-shirt contest?

Love that ship. It is so well maintained. Would love to go for a sail.
Mary

I would love to have seen that ship up close and personal! Great pics!

I never knew the story of that coin that we would occasionally get in change. Do you remember when they were silver?

Love that big anchor and shiny bell! Also I had no knowledge of this ship before so slways like to learn something new :)

I always loved the Bluenose as a child. Don't know why.

impressive sailing ship. although I would never sail on it - seasickness would get the better of me. isn't it nice to see history instead of a crappy theme park?

Great photos, Debra! I haven't been that close to the Bluenose in years!!

Aahhh the Bluenose ~ haven't seen / touched / soaked up her beauty in a few years since the refurbishing started. Love your photos making me miss her even more !

She really is a beauty. They don't make them like that anymore.

It is beautiful!
We bought a windsock in Lunenberg!
Did you go to Mahone Bay?
Cheers!
Linda :o)

oh she's a beauty,and I would love to sail on her..wow.

Hey, Debra! I just realized you were back! It's good to see you back blogging again. Congrats on 7 years! Wow! Loved the photo of you and your Rare One on the beach ~ LOL!

Lucky you, to see the Bluenose. My sister and I planned a trip last summer (2014) to see her in Lunenburg, but an insurance dispute over a metal rudder left her in drydock. Arrggghhhh!!!!! We had a blast exploring Lunenburg though. There is a lovely song "Bluenose" written and performed by Stan Rogers. I'm sure I've played it 100 times at least. Here's a link, if your so inclined:

You make me long to go back.

That IS really beautiful. Now that there are many other gorgeous ships, Bluenose still outstands. Now I can imagine how impressive that was in its time.

I like the bell, I bet that takes a tin full of Brasso each time it's cleaned. :D

She's a beauty, eh? Stan Rogers music comes into my mind when I see things like this. Especially songs like the Mary Ellen Carter.

A wonderful piece of beauty indeed. Thanks for sharing.

Great that you had the opportunity to see this ship! I once visited a similar ship here in Antwerp, it was really special.

Very cool indeed. Up close and personal. Looks like a fun outing!

gotta get a T-shirt. Anyone three sheets to the wind on board?

You are a true patriot, Debra! Great photos!

Wow, look at those floors - how they shine! lol Nice to see you back, Debra!

What a grand ship. I never knew the significance of the icon on the coin.
thanks for sharing
the Ol'Buzzard

What a gorgeous ship! You got some really nice shots of her.

What a stunning lady. I understand why buying a t-shirt was your patriotic duty... yes, I do.

wasn't there one of those CBC commercials when the Bluenose won her last race?

Fabulous travel-log! Love your photos of this incredible ship!