Do you TRULY want to elect an evil, lying, unscrupulous, narcissistic fascist as your next President?

You do? OKAY, FINE THEN! It's YOUR funeral.

But at least vote for the REAL DEAL, not that pantywaist pretender Trump!

Trump's an AMATEUR compared to THIS guy! 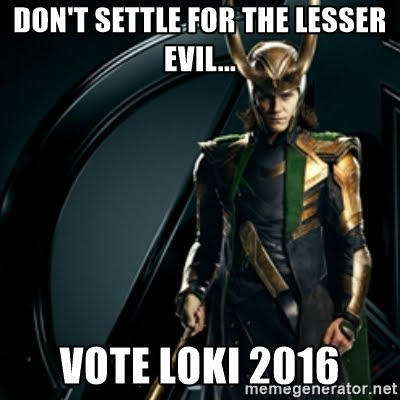 If the Norse trickster god Loki Laufeyson can't rule ASGARD and can't rule MIDGARD, then what the hell -- the USA is the NEXT BEST THING! 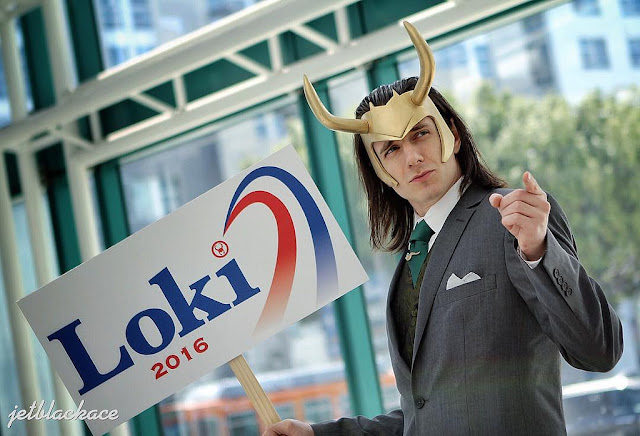 Like his campaign slogan says, Loki puts the LIE in BELIEVE! 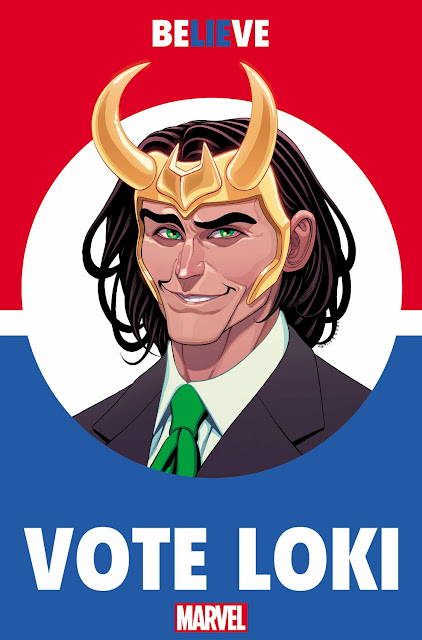 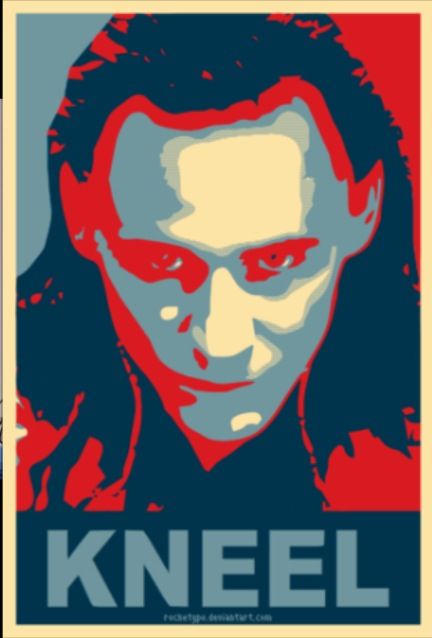 Plus he's got a HELLA CUTE security guy on his team -- 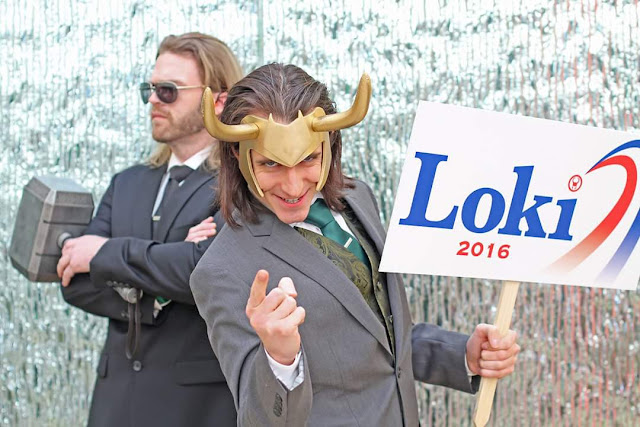 SO dedicated to his duty of keeping Loki safe! 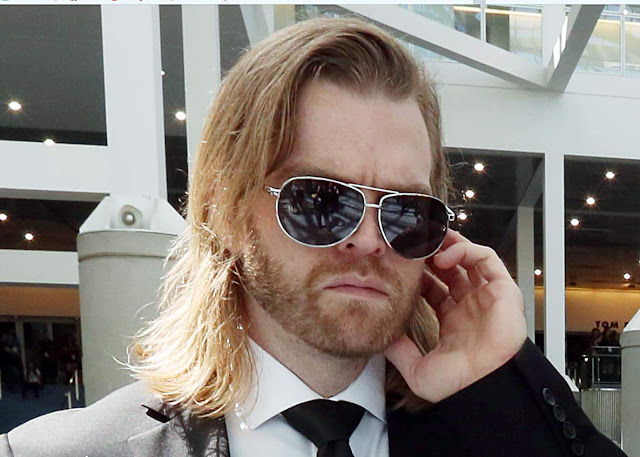 And you know, if you thought BILL CLINTON got up to sexual shenanigans in the Oval Office, well, you ain't seen NUTTIN yet!

[The outstanding cosplay is by Loki Hates You and Thor TV]

agreed that Trump is a fascist, but how is that lying, ebil biatch Hilary any different? She was a mastermind of death and butchering in my own region and country many times, not to mention the rest of the world. Trump is a fascist on his words, Hilary a proven one. They both need to be locked up.

I was surprised when you said it was a cosplay. It looks so good I thought they got together to have a little fun. But with Hilary Clinton and Donald Trump on the card doesn't that make Loki the lesser evil?

With Teresa May over here I think we need the Avengers more than ever.

What could he do that would be so much worse that what's already happening? Would he bomb more innocent people with flying robots? Deny healthcare to the poor and in need? Start unnecessary wars? We have all of that. Why not give Loki a shot?

I think this is what happens when the white male majority gets scared. I was really hoping Bernie would be our other choice *sigh* At least he appears to have some integrity.

Yep. I do believe is the Best candidate for the job!

Loki has a bit of a southern twang to his speech. Wonder if he came from Southern Asgard. I'll vote Loki for sure.

I'm embarrassed to say I don't know who Loki is. I'm just waiting to see how things work out with May here in the UK.

This is one election that really scares me, but if I have to choose between the worse of the two evils, I'd have to say Hillary. I think Trump would be too quick to push that button. Oh, where is Loki when we need him?
Mary

Well, I'm glad someone can find humor in this mess. Me? Not so much.

If you didn't have Hulk punching out Trump, I would have had to wonder which candidate you were referring too. The only comforting thought in all this mess is that when the Clintons left the White House before, they left the country in pretty decent shape. On the other hand, Trump tends to bankrupt the companies that he is in charge of.

This election just proves that the office is going to the lowest common denominator, because nobody wants it.

Can't get much worse !

So many scare-monger ads, so little time. What to do? I knew I should have run this year. No matter who wins, I may have to run (away).

I think Loki is a viable option. I still have an exit plan ready, just in case.

I'm more of a Cthulhu kind of guy (Cthulhu 2016 - no lives matter!) but I suppose Loki will do in a pinch. I'll pretty much vote ANYTHING that's not Hillary or Donald. This rock with googly eyes? Why yes, take my vote!

I am really looking forward to the presidential debates. Popcorn, wine and a lot of laughs! As is typical of the last couple of decades we need to vote in the lesser of 2 evils.

Not sure that's any worse!

Well, I heard that there is not much choice for the President's position actually... We can just witness, the decision is Americans'...

This is outrageously awesome. He puts the "Lie" in believe. I love it. And his hot security guard gets to work when horses are nearby. Haha. Loki's pretty cute himself; I'd vote for him.

OMG! OMG! OMG! K.D. Lang just started following me on Instagram! You know I love her & music, for ages....I'm about to faint! OMG, OMG, OMG!!!!!! Had to tell you xoxoxoxoDebi

News flash, eh. Justin Trudeau, due to a bunch of pleading Americans, is going to run for President of the good ol' US of A, eh...

we need to get off our liberal high horse. I you cant see a difference in Hillary and Trump then you should write in Loki when you vote. There is only two choices. One would encourage nuclear arms in South Korea, Japan and Saudi Arabia and has no policies other than 'Trust me. I will make it great.' He would punish women who have abortions and deport eleven million people. He has aligned himself with white supremacist. The other would continue Obama's policies - perhaps even moving closer toward universal health care (Medicare for all.) and would govern toward the liberal.

There is no choice. There has never been a perfect choice in any election.
But especially in this one
the Ol'Buzzard

LOL!! Brilliant post Debra! Actually, it scares me, because I think he will get in!!!

Darn, I thought you were talking about Clinton, who is much worse than Trump.

hahhaa, you come up with the cutest posts...that always has a message..I love that. Now, you may know from reading Adam's blog that I am a Republican...now, not so much that I couldn't go along with a Democratic president IF he/she was honest and REALLY cared about our country and people...but Hillary ....OMG..it scares the hell out of me just to THINK people will actually vote for her.

Vote Loki. You crack me up.

Many of us here in the US have not been able to fathom why others are still interested in voting for Donald...it's beyond unbelievable...

Tee hee - we are not all voting for Trump.

I don't even know who this Loki is, but he's got my vote.