A brand spanking new downtown arena for our hockey team, the Edmonton Oilers, that's what! Yes, they are one of the worst teams in the NHL. Thank you for feeling compelled to point that out. But things are gonna turn around any day now, just watch!

Rogers Place is shaped weird, you say? No no no, it's supposed to look like a big drop of oil from above. 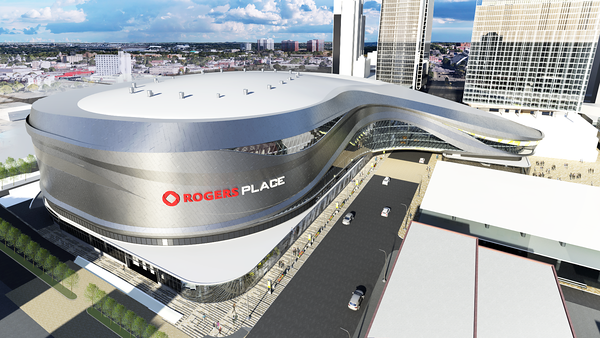 There now, does this graphic make that clearer? 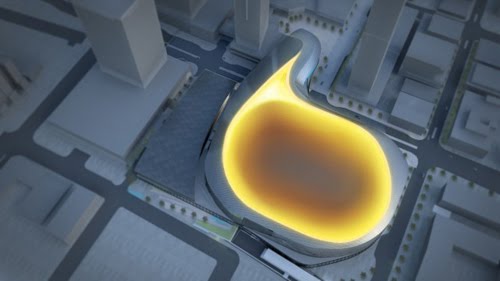 See, it's sort of just like the Oilers' logo with its drop of oil!

I live on the edge of downtown Edmonton -- oops, pardon me, downtown Edmonton has just been rebranded and is now called The Ice District instead -- about 4 blocks from the new arena. Everything within two square blocks around Rogers Place is also under construction with more office towers, apartments, hotels, restaurants, a casino, museum, luxury cinema, etc etc etc. The new arena and all the surrounding growth it's attracting are going to transform downtown Edmonton and make it vibrant again in a way that it really hasn't been for the past 50 years.

Here's a cool time-lapse video of the construction period from March 2014 to August 2016, boiled down to a little over a minute:

And here's what the Oilers' new dressing room looks like. Pretty swanky, eh? 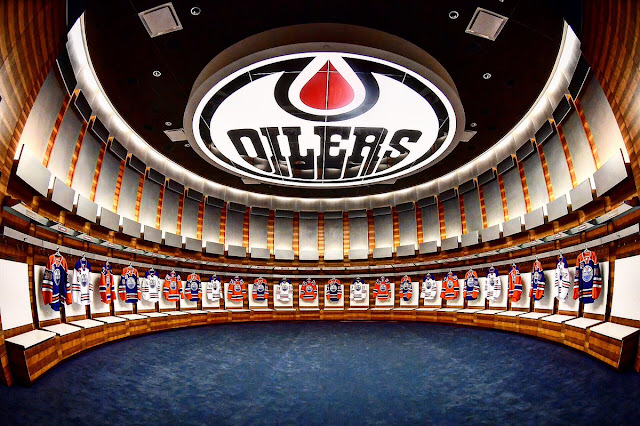 So, boys, get your asses out on the ice and start winning some goddamn games now, okay? Return us to the glory days of Gretzky and Edmonton's five Stanley Cups! That's not too much to ask in return for all our tax dollars, is it?

I would be pissed if my tax dollars went into a facility for hockey, especially with the Alberta economy tanked like it is. If an NHL game was played on our front lawn I wouldn't go to the window. Those are fighting words in this country!

tell us, sister, does this mean the price of your place will go up too because of this? :PP

I'm glad you pointed out that it was a shape of a drop of oil. Never would've gotten that. Never. Cool stadium though.

well, all I can say is I'm glad I live in a tiny little town on the coast of Maine where you can still leave your doors unlocked. I do hope your Oilers win some more games tho :)

As an Official Architecture Whore™ I love the new building. Very sleek and cool.

Looks very trekky. Those Oilers best get at least one goal in that cool place.

Very cool and expensive! Sometimes I wonder what certain architects are smoking when they design certain buildings.

I'm sorry but when you said that your Oilers were going to "turn things around any day now," I started crying. Yeah but I was dying laughing first which brought tears to my eyes.
Okay, it's been like 22 years since a Canadian team has won the Stanley Cup, and 27 years since Edmonton has won it. You Canadians are real sticklers for trying to get the Stanley Cup back, that's for sure. But I'm not so sure we wanna give it back just yet. It's so Shiny and sparkly and so pretty. We like it so much we gonna keep it for a while longer.
BWAAAHAHAAAHAHAHAHAAAAA! ;p

Amazing video! And I love the building. Very cool looking.

Maybe they were just waiting for inspiration - such as this swanky new arena! I've spent years - no, decades - of my life rooting for the Cleveland Indians, so I feel your pain. And your hope. Go Oilers!

I wish I could watch a live hockey game. I think it is an exciting game. Many kisses and hugs

It looks good. Regeneration of a dilapidated area is a good spend of public money if it boosts the local economy.

My husband keeps saying the same thing about the Toronto Maple Leafs.

Mercy - that is a nice building! I'm glad that area is thriving.

the time lapse clip is great.
Who is Roger?

Oh, the Oilers glory days I remember those! Soon I will be saying that about my Blackhawks. But that stadium tho!! WOW, and to live that close would be awesome. Good luck to your team good news season starts soon!

DAYUM! I think my flyers play your oilers...but then again, I don't follow hockey.

Wow!!! That sure is something!! I think the Toronto Maple Leaves are worse than your Edmonton Oilers! LOL!
(Thanks for e-mailing me about the ice-cream! We have Chapmans, so I will be looking!)

maybe i just have cooking on my mind all the time but it looks like a big frying pan with a lid on it.

When I saw the picture, I thought it was a chic waffle iron...

I hope they win a damn game for their fans after all that, too! :D

@ bill lisleman --It's called Rogers Place because the naming rights were purchased by one of Canada's largest telecommunications companies, Rogers. They're my cellphone carrier, incidentally. LOL

Wow - stunning- I just love to watch things like that. I am always surprised that humans can build a one story building that doesn't fall down - and then to see something like this - amazing.!!!

I really can't understand why we spend so much money on sports related salaries and buildings. I say that from the standpoint of a person that just doesn't have any interest in sports - except for Rockets basketball. However, if someone were to say to me that art museums or music halls were a waste of money, it would not go over well. So I guess to each his own. As for the other comment, I'll bet your rent does go up although they should pay you for the inconvenience of overcrowded streets on game day. I live near a celebratory area and its either be gone until midnight or don't leave home at all. Good luck. It may be fun after all.

in my country politics is involved in national games that put great pressure on selection board and chose players only recommended by politicians .it has made the performance of hockey and cricket teams and rest others very disappointing .so painful for nation to bear such hopeless shows while there is lots of talent growing and grooming in the playgrounds and streets

Watching the time-lapse clip , I thought of Bewitched and my nose itched .

Loved the video but hate the building, but I hope it brings much more value to the area. I think I'd be moving away from it!

gorgeous new building - and very cool design. If only I liked hockey. Not that I have anything against hockey. I'm pretty equal opportunity about it - I also don't really like football, baseball .... you name it. I'd rather be camping, hiking or pretty much anything else. :)

I know nothing whatsoever about hockey...or about your team...but I sure hope they win a bunch of games this year. Their new facility is so nice...and if you like pumpkin at all, you should try a Starbucks Pumpkin Spice latte...I couldn't even believe how good it was...

If we had all the money that sports puts into it's facilities, we could pay off the national debt...but nobody wants to do that anyway!! So they should just go for it!! Beautiful

That is one ugly building.

Yeah, the cost of all the mega stadiums is staggering. While most of expensive stadiums in the US are built for football or baseball they also have exorbitant price tags ...at least a dozen have gone over a BILLION dollars (yes B as in boy) The Cowboys stadium was 1.15 Billion and the estimate on the LA Rams stadium is projected at 2.1 BILLION.

Still, I think your Oilers stadium is very cool and hope that it brings a lot of revenue to your city. Maybe it will inspire the team to step up their game.

Begs the question, was public money used to build this monstrosity?

I hope it revitalizes the area.

@ G.B. Miller -- It was built with a combo of municipal tax dollars and team owners dollars. No provincial or federal tax money went into it, although the team owners certainly tried to dip into that gravy train too.

Yes, please Oilers, pleeeeeeeeeeeeeeeease!
I work in Edmonton every summer for a few weeks and I've done this since about 1991. A good friend has a condo on 104th and I'd often stay there so in the last few summers, I've been able to watch its progress. Truthfully, downtown Edmonton has grown and improved so much in the last 20 years. Hopefully all that money is worth it.

I thought it was the hitting part of the stick..go oilers.

I just got back from camping with friends, one of whom is from Edmonton and is a die hard Oilers fan. He is excited about the new facility and thinks THIS WILL BE THE YEAR! Sort of. More like, he hopes they will win some games.

Here's to your Oilers! It's time for a Canadian team to win the Stanley Cup! Rather cool looking arena ~ But too bad the taxpayers have to pay for it. We always get stuck for the cost of these millionaires playgrounds.