Potatoes in the News

Over the past month, three quirky Canadian news stories about potatoes caught my eye (get it? get it? sorry). Links in the text are to the original news item.

Yes, it's been slow around here lately and I am reduced to this.

1. The Spud of Honour 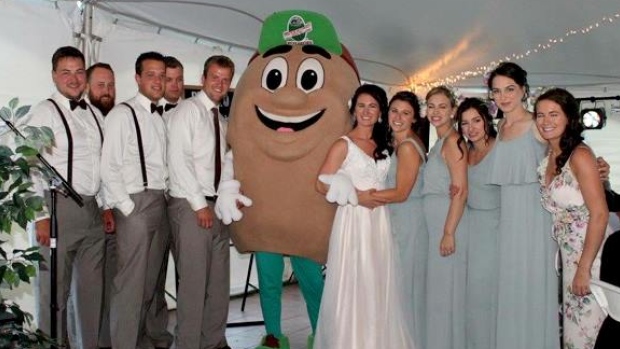 "Tate the Tater," industry mascot for the Prince Edward Island Potato Board, was invited in August to attend a local PEI wedding. The groom, not surprisingly, works on a potato farm and the wedding took place on another potato farm. Who wouldn't want a real "bud the spud from the bright red mud" at their wedding? (to quote Stompin' Tom for the first and last time in my life). 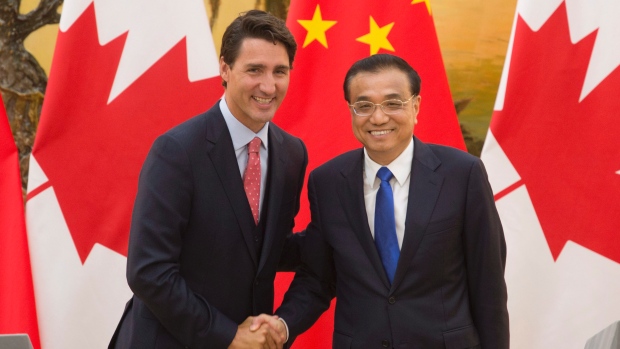 [photo by
The Associated Press]

One of the more interesting facts to emerge from Prime Minister Justin Trudeau's recent trade trip to China is that he is known in that country as "the little potato." It's a play on words because the Chinese word for "potato" apparently sounds just like "Trudeau" but without the "r" in it. I wonder if this means they called his old man "the big potato?" 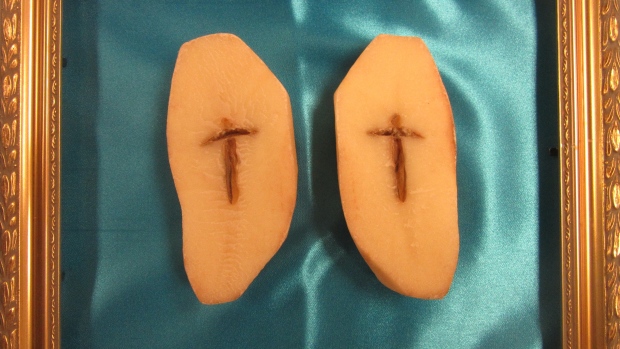 About a month ago, the latest Holy Sign from God revealed itself in a potato that was being cut up for supper at a Quebec seniors' residence. Devout residents are now drying out the Holy Potato so it can be preserved in a custom-made display case in the dining room. No word yet whether the seniors' residence has become a place of pilgrimage.

Some sceptics suggest that the markings may be the result of "hollow heart," an affliction found in potatoes grown in heavily irrigated soil during wet seasons. This condition causes cells to die and results in brown tissue at the centre of the spud.

lawd, this girl needs some writing help; where oh where are the muses when she needs them?

So glad to see my home province represented in the potato category! Stompin' Tom would be happy for Bud

OMG a holy potato! Would the chips have a blissful and blessed taste?

And the Holy potato has been cut into the shape of a coffin. Very comforting for the senior residents I'm sure.

Aren't those the three signs of the Tater Apocalypse?

Hahaha! Got to love our news. I wonder which senior residence it is.

It's good that Prince William is visiting Canada. We don't have his photo on the front of the papers for a while to remind us of what he looks like. Thank God for that.

What a great post! Potatoes....who knew they were so popular!

FYI - The Beady Eye has gone mobile! You can now get a Goog or Cantaberry on the road! :)

You should move back to the Peg - if only for the ice cream! :)

Holiness is in the heart of the potato. It makes perfect sense.

OMG, did I need to read this post today. You are the BEST!

Too funny. It is funny how something like the potato will pop up in different places at the same time. I'm sure I'll be seeing the spuds around here now that you've called my attention to it. LOL.

I once saw a X in my food. The lord and savior of all humanity, Microsoft Xbox

The bride in the first picture looks like a friend of mine.

Me loves a good spud. AARR!

A holy potato in my hometown... *groan*

potatoes the love of my childhood ,craze of my teenage and banned in my forties oh God

Spud tabular as always! Oh those wacky Catholics, they can explain everything! Amazing 🤓

The holy potato will soon be holy moldy potato? What a waste of an otherwise hearty dose of crisp french fries.

Love your sense of whimsy and of course the potatoes....LOL

Also, I had forgotten how studly your PM is! Another perk to a good post ;o)

Eye've never seen a Holy Potato until now. How long does it have to wait for sainthood?

That wedding picture killed me. Oh my goodness! Bwahahaha! I hope they got some decent shots without the potato. Poor bride.

God has to appear in a potato? Doesn't say much for an all powerful - why not a meteor shower that turns night to day - or some other magnificent display? Pretty poor showing if you ask me.
the Ol'Buzzard

Those are pretty funny taters. I love in the last article the guy is quoted as saying "he doesn't want people visiting until the vegetable is dried and put into it's custom made case." OMG...this spud is giving these seniors a new reason to live...tourism.

Now your comment about potatoes on my blog makes perfect sense. :D

I'll be checking my potatoes more closely when I cut into them from now on. I think one of those would look tremendous in my Cabinet of Curiosities. ;)

Potatoes get a bad rap these days. I love potatoes.

you have a potato man running around Canada and we have creepy clowns creeping around..sigh*

I love the "Little Potato"! That is adorable!! I bet his old man was the big potato! LOL!

I like potatoes in my curry.
and i make a hell of a mashed potato dish!
hahaha!

Loved this post, Debra! There are plenty of PEI potato farmers in my father's family tree. Terry even met one of my father's cousins who was representing the PEI Potato Board at a conference in Denver ~ not too long before we were married. Nothing fills you like a good PEI potato! Have a great weekend!

btw, Debra ~ I forgot to say that I've been to the Robert Bateman Center twice. It's wonderful. I returned the second time with my sister Donnie who is a big fan of RB. Thanks for recommending this!

Potatoes are God's greatest creation! French fries, hashbrowns, baked, mashed, au gratin, home fries. . . There is virtually no end to the ways you can enjoy the potato.

Oh, my God, whatever it is the Greeks do to their roasted potatoes! Can't believe I forgot those!

generally I think of potatoes as its own food group, as I love them - pretty much any way you want to make them. I've been known to have mashed potatoes and corn for dinner (who wouldn't want a plate of starch?)

You know I've seen the odd potato here on PEI. I think they must grow some here.