A Boy and His Bird 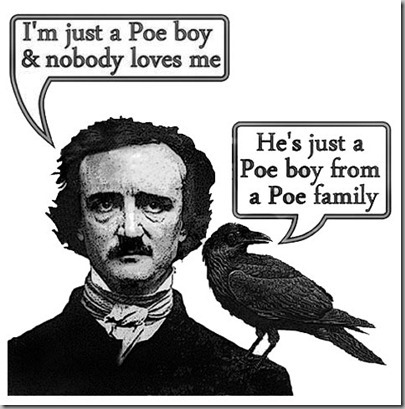 I bet more people buy and read Edgar Allan Poe's books in October than at any other time of year. That poor miserable bastard was probably lucky in some ways to have been born when he did. It meant he escaped the clutches of George Lucas, the Muppets and Disney. At least until now. 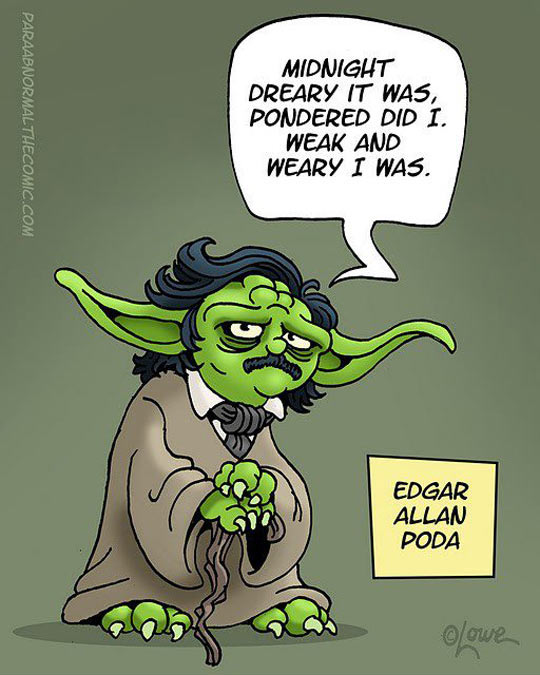 Apparently poverty, alcoholism and syphilis didn't scare Edgar Allan Poe. No, he had only one fear -- 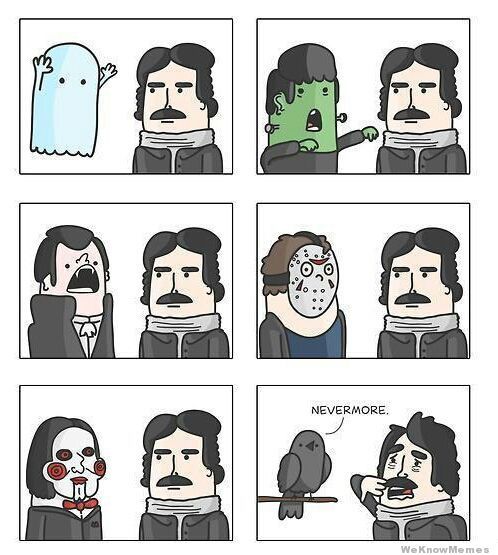 But like every writer, Poe had to struggle with his literary creations too. 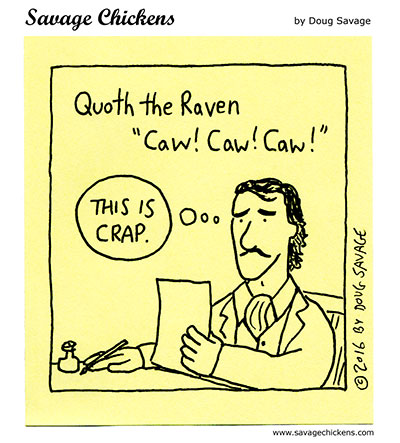 And his muse was kind of an ungrateful wretch, all things considered. 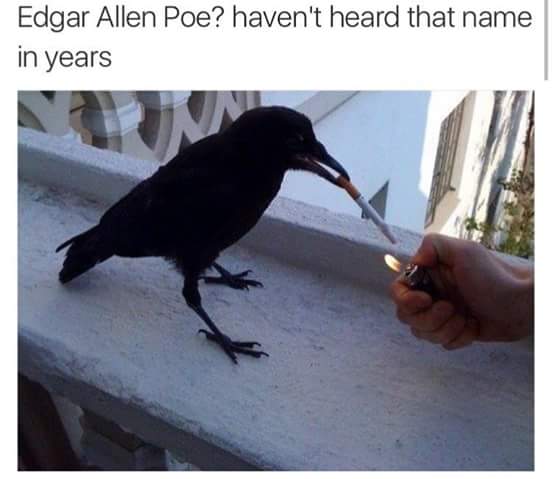 They had a pretty dysfunctional relationship, actually. 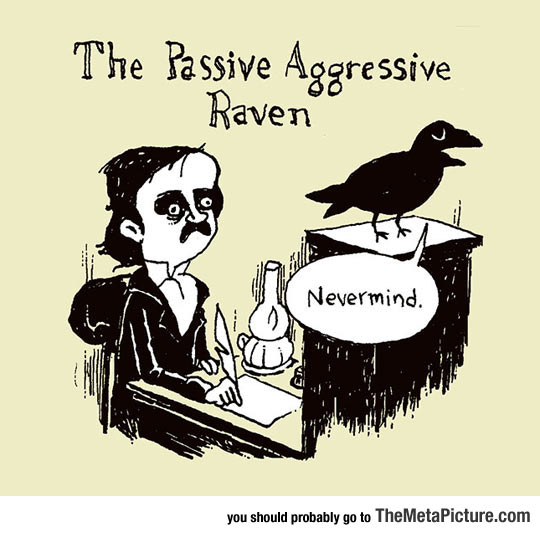 Those Ravens can be such bitchs sometimes!

hee hee hee; appropriate for this time of year!

I wonder who gets more attention this time of year; Poe or Lovecraft? All I kmow is lots of goths head up to Whitby.

He must be big in America because I've never heard of him.

I can't get enough of reading Poe, and you're right: this is the perfect time for reading this books! "Quoth the raven: caw,caw, caw!" doesn't sound very good :D

Never read any Poe. Not really my genre.

Hahaha! I love this!

To me, Poe is to October what Dickens is to December! Hmmmmmmm song lyrics, must go write this down! xoDebi

I would love a Raven! Where can I get one?

I completely lost it at Edgar Allen Poda.

I am just a Poe boy though my story's seldom told. . .

I was about 9 years old when I started reading Poe..freaked my mother out and cracked up my daddy..we would get copies of the same Poe book and read them and then compare notes..ha

Fantastic! I have a book of Poe's work that I haven't read for years. I will have to pull that out this month!

Some great Poe humor ... thanks for the "Smile", dear Lady Debra...

Some pretty great campy horror movies were made in the sixties and seventies based on Poe's work, most of them involving Vincent Price in one way or another. I spent many a Saturday morning watching them.

Those are hilarious. We went to a house in Baltimore one time where Poe lived (I don't think he ever had his own house). We went up to the bare, hot attic--a tiny room where he wrote. It was one of the more boring day trips I've taken. I'm not a Poe fan. In fact, it was a horrible day. For some reason, X insisted on parking a couple of miles away from the house because he saw a sign that said Poe House, with an arrow. The arrow meant keep going this direction. It did not mean Stop Here and Park Your Damn Car So You and Your Wife and Kids Can Troop Through The Neighborhood While Everyone Stares At You, Idiot.

Each and every one of these is a hoot. My fave Yoda it is.
We always read a couple of his poems after dinner during October, because we can. xoxo Oma Linda

He really was a Poe man, Poe in health and fortune

This is brilliant - especially the passive aggressive raven. :)

Those are great...really funny. I think the Savage Chickens are always hilarious.

Aww.. Poe's sad eyes... Ravens should be grateful that he made their kind renowned among people.
Have a happy weekend ahead Debra!

As I am known in the neighborhood as the one who feeds the crows, this post makes my heart sing! :) Must put out more pnuts for my crows....

The first one made me laugh out loud..Thanks
I was a big fan of EAP when I was pretty young..

You are really funny and I really appreciate it. Funnily, I just did a post on literature and writing too.

I love Poe. My middle name is Edgar. Maya Angelou loved him so much as a girl she called him Eap.
(Off topic, check out the troll that has a teenie tiny little issue with my Samantha Bee post. Please just don't feed him.)

Oh I didn't know it was the anniversary of Poe's death! Too late for a blog post tonight and I am too tired, but thanks for reminding me.

Over the past few decades...okay, forty years, I've really tried to read Poe. But after reading so many witty things that are tied in to "The Raven" over those same forty years, I really can't bring myself to crack open a Poe story.

I always knew The Raven had it in for Poe. Probably hired someone to give him syphilis. Hey, stranger things have happened, right? I mean, have you seen the news lately!

OMG .. thank you for the laugh. those were awesome

You had me at, he's a poe boy. Pretty good stuff.

good ones - I'll be pinning a few of them.
Poe was a favorite of mine back in school. The reminded me of the pun phrase, "Pour me, yes pour me another shot".

i wonder if he was that bore unimportant why we are talking about him ?

best wishes ,reading you is always enthralling the soul

Haha! I love your sense of humor, Debra! These are so much fun. I especially enjoyed the two where Poe is writing. Only bugaboo ~ Queen is now a brai worm that's going to be crawling inside my head all day! Have a good one!

Poe and I couldn't be best friends because he was too depressing to be with.
Caw caw caw!