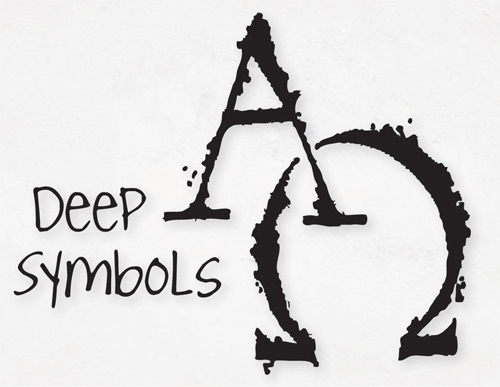 To reclaim (or perhaps to co-opt) some traditional Christian imagery, the first and last items attached to my string of prayer beads may be symbolically understood as representing "the alpha and the omega, the beginning and the end." This classic Biblical description of the Divine means, of course, that the Divine is eternal, being both the source from which we come and the source to which we return at the end of our lives. This symbolism and imagery are equally applicable to the Great Goddess of All.

I provided both these alpha and omega items to my sister for incorporation into my prayer beads. 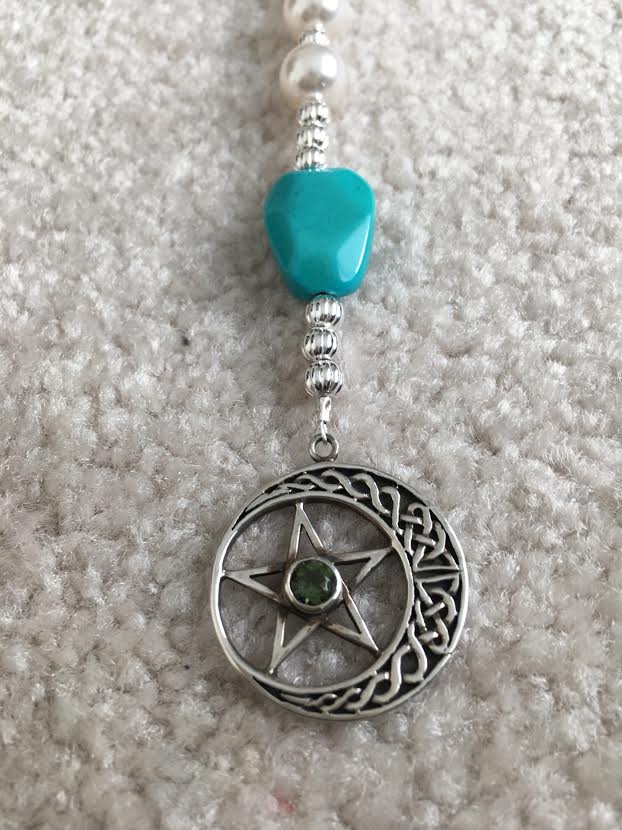 In Goddess spirituality, the five-pointed star-within-a-circle (pentacle) of the Goddess represents the four sacred elements of earth, air, fire and water plus the fifth element of spirit. This pentacle features a green peridot gem, my birthstone for the month of August.

The pentacle is framed by a beautiful Celtic knotwork moon. The moon is one of the most ancient symbols of the Divine Feminine because its phases correspond to the triune nature of the Triple Goddess -- Maiden (waxing crescent moon), Mother (full moon) and Crone (waning crescent moon). Depending on the angle of your perspective, all three phases of the moon (and therefore of the Divine Feminine) are represented in this item's design.

I bought this as a 50th birthday present for myself 10 years ago. It's meant to be worn as a necklace of course, but I've never been much of a jewelry wearer. It will serve a much better function here in my prayer beads! 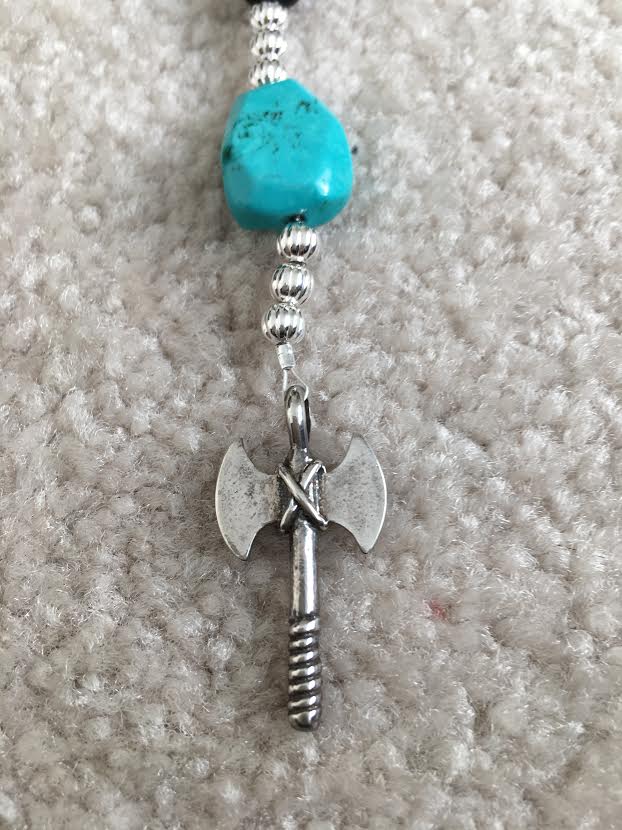 This double-headed axe is called a labrys. It is an immensely old fertility symbol that was used by the ancient goddess-worshipping civilization of Minoa (Crete).

Designed to stylistically represent the vulva's butterfly-like double labia, the labrys is so inextricably associated with women that classical art often portrayed it as the favourite battle weapon of the Amazons, the mythical female warriors who fought against patriarchal domination.

This symbolism led to the labrys being adopted in the feminist 1970s as the symbol of the Lesbian Nation. The modern women's spirituality movement has now also revived its original spiritual meaning. The labrys is an extremely resonant symbol for me personally because what it represents -- feminism, lesbian rights and women's spirituality -- have all been central to my own life.

I bought this labrys nearly 30 years ago in Winnipeg. It was handcrafted by a talented lesbian silversmith and jewelry-maker in that city. It too is meant to be worn as a necklace but will serve a higher function now as the omega of my prayer beads.

My next post will explain the colour-and-number symbolism of the prayer beads themselves.

Pretty interesting stuff Debs. The beads and symbols are cool. I do believe Joan Crawford would love the ax.


i agree as i read your post below too that prayer beads are being used in each society ,here Muslims too use this to say the 99 sacred names of Allah [God] ,one name one one bead or verse repetition .

The symbolism is so awesome!

but the question is - can labrys be used as a weapon if need appears? :)

This is such cool info. I love the symbolism. And I love the star-within-a-circle (pentacle). That is really awesome.

Ohhh I so enjoyed this post. I also love your jewelry. Looking forward to your next post on color.

Wonderful! Beautiful symbolism ... for everyone and for yourself.

Debra....thanks for sharing this info. I'm always interested in all things "spiritual".

Beautiful. The imagery, symbolism and spirituality of it all speaks to your deep spirit. I love the pentacle and moon. Did you buy it locally?

I've made several pendulums over the years but I need to create a personal prayer beads.

"The labrys is an extremely resonant symbol for me personally because what it represents -- feminism, lesbian rights and women's spirituality -- have all been central to my own life."

I didn't know about that symbolism. An axe seems a bit strange to me for a feminism symbol but symbols can come from odd places.

@ Toni -- Yes, I did buy the pentacle and moon amulet locally in a pagan store but I'm not sure where it was manufactured -- almost certainly not locally though.

Nice to stop by and get a little education on things I know next-to-nothing about.
Thanks for that ... and the jewelry is hot, too.

I am quite taken by your explanation of the labrys. Fantastic.

I keep forgetting that you are 60. You seem more like a young chickie. 💕

Very interesting to read about the symbolism on your prayer beads - in days of antiquity most people readily understood symnbolism but today so much of it is seemingly lost on us. It is far easier to understand and appreciate the meaning of paintings etc if you know and understand symbolism too.

There is a lot of symbolism in just those two pieces of jewellery. That is fantastic. I can tell that this really does hold a lot of meaning and significance for you.

My favorite weapon when we play D&D (which sadly has been several years - yeah, I'm a nerd sometimes, don't judge me!) is a battle axe. Power baby! Oh, sorry...I drifted. You were talking symbolism...um, yes, symbolism. Does it matter that I play as a male dwarf? ;)

Stuff I never knew before. Thanks.

Hi Debra! :) What a great post...and I can't get over how lovely your jewellery is, especially your alpha piece. Just beautiful!

Thanks for the education..I always learn things from you..I love the" axe" pendant..I would have to wear that one!!

This is fascinating, Debra! What a lovely and meaningful string of prayer beads you have! Happy Easter. I'm daring to hope that the wild bees inhabiting one of the columns on our deck have flown off. Whew! I've been co-existing with them for a while. They always remind me of you! Take care!

Interesting stuff which I knew nothing about. I have to be honest and say I just wear great big fat bling chains coz the look good. Well I think they do. :D

I always learn something here, Debra. Thank you and I LOVE your beads!!

This holds so much meaning Debra!! I really love this post! Thank you for sharing all of this! Big Hugs!

Thank you for the in depth explanation of the symbolism. This is so interesting and some things I'd never heard before! Look forward to your next post! Beautiful!

Those are beautiful and I especially like the green peridote. Thank you for all the explanation.