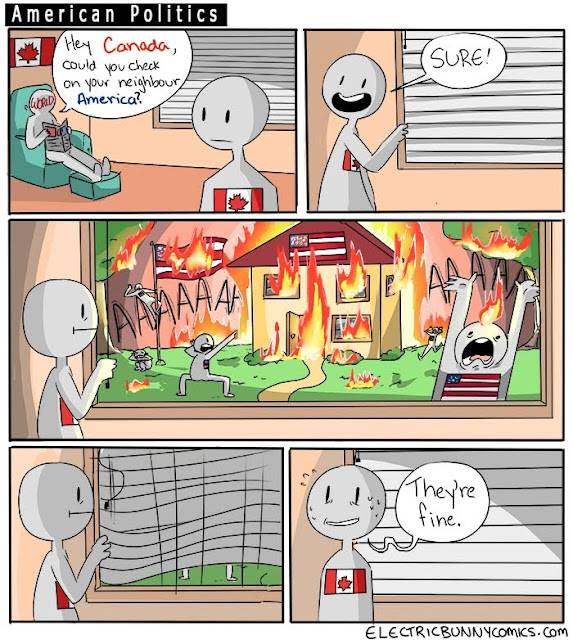 and now the orange shitstain wants to start a fight with canada over milk and timber; JFC!

He's doing his best to pull us into it, Debra!

I have been so thankful for the funny commentators like Bill Maher, John Oliver and Chelsea Handler each week. The comedic look at what is going on relieves a little stress. I heard this week that only 4% of this voters regret their vote. Seriously?! Crazy Americans.

Now, if you could build up a wall around it and throw in some more fire, it would be lovely

Yep its a shit show

What, no guns in the picture? '
the Ol'Buzzard

Unfortunately anti- democracy is under attach world wide. First Brexit then it caught like wildfire ( sorry back expression) Declining white population plus massive refugee disaster fuelling the NOT so Christian behaviours. This is what resistance to the future feels like. I look to the young and they bring me hope, that Kind Humans will win out. I am pleased that prejudice and MEME behaviour really sticks out here and I for one will call them out. I am however pissed that I'm not going to age gracefully while my neighbours are being ruled by HumtyDumpty, and his bullshit is awaking Dumpties here in my country! Now back to my twitter feed! xoxoxoDebi

Trump could vomit in cereal and his supporters would call it milk and gladly eat it.

Scary times ahead for the world. Trumps coming to the UK this year, God help us.

I feel (kind of) guilty laughing but this is so funny! LOL

Haha. A more realistic comic I haven't seen. And now for him to bash Canada (again), really dude? How desperate. Please, please, on behalf of your grand, grand country, forgive my embarrassed nation.

Its er interesting, hearing the news every morning.

Hopefully he won't be in another hundred days. Is he even still in? My gin intake has gone way up, I have no idea.

Sadly we are starting to feel some of the fallout from the fire and the heat is getting awfully close.

truth is bitter but you coated it well.
Trump sounds much like leaders we have here ,after each disaster they say ahhh all is well ,nation is on it's way to success [god dame it]

Yeah, we're burning out of control, as usual when Republicans take over. We'll be back to normal at the next election when a Democrat is back in office. The problem is, it will take 8 years to clean it all up and then stupid people with short memories will vote another idiot Republican into the White House and it starts all over again.

America isn't doing that bad. Things could be better, but almost none of what people were freaking out about has happened.

Ha! There's a good bit of truth to that, but it still gave me a good laugh this morning! xoxo Silke

Ugh. It's too true to laugh.

To be accurate, you'd have to have a bunch of people on the America side cheering that their house is finally being burned down, and another group saying the house being on fire is Obama's fault!

If only I were on your side of the border looking at the mayhem from afar. It takes all the strength I have to not hit someone with a pot when I hear them rationalize his behavior. He wants to dismantle our country from the inside out and if anything goes wrong it was Obama's fault. It is amateur hour by 2-yr olds running through the White House.

All we can do here in the UK, is look on in horror 😟

Normally I would launch an insult or three about the anti-Trump bigotry being spewed by the commenters here. But I respect greatly the owner of this blog, and thus will keep my mouth zipped.

However, the overreaction that the cartoon displays is sadly spot on, and it doesn't show any sign of fading away any time soon. The left is anti-free speech and pro-hate here and simply will not ever change and sadly, this is the normal response by them to everything that they don't agree with.

Almost makes me want to take my blog out of inactive status and write an extra post for the month of May.

I will try to leave the flames here... when I run away screaming towards your house.

Laughing so hard at this but feeling guilty for laughing at the same time :-/

I wish the joke was different. What's the reaction of can-you-believe-it President Trump recent threats about Canadian lumber and milk getting a higher tariff?

The guy is a cable news junkie who loves a big cheering crowd. He only cares about the attention.

Sad, but true!!! I hope Prime Minister Trudeau sticks up to him!

As a confused Canadian watching it all, my anxiety is finally lessening. But not for good reasons. This cartoon says it best. I'm at my saturation point and I just have to close the blinds.

Um, Australia has yet to disintegrate into flames ... yet.
Though we do have a Prime Minister who seems more than happy to 'kneel' to the Great Big Capitalist with unpredictable Fake Hair Colour!!!
(why have the people in the smallish patch of this planet between Canada and Mexico - taken the 'you' out of colour, humour, and honour?)

They forgot the deep dodo.