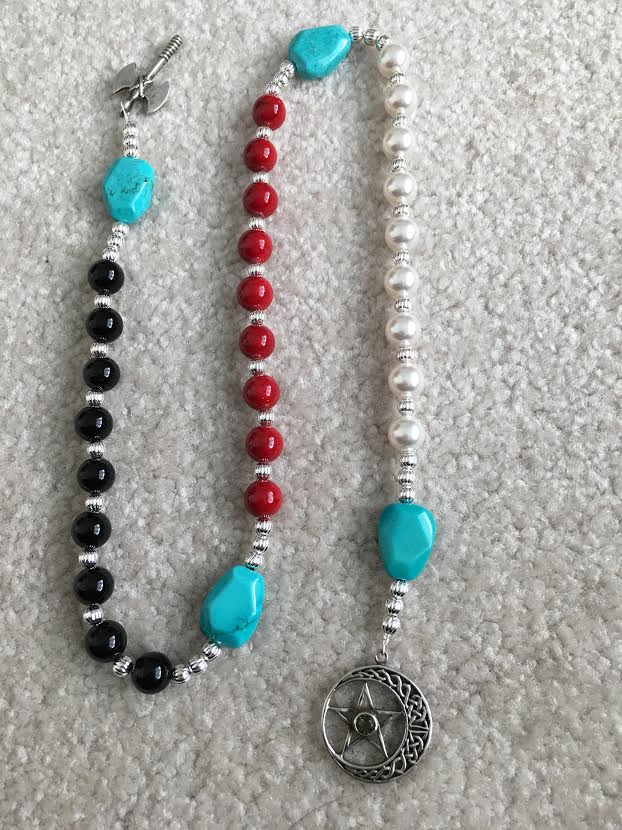 Because my prayer beads honour the Triple Goddess, the sacred number 3 is repeated throughout the set. There are 3 separate sequences of glass beads, each sequence comprised of 9 (3 x 3) beads. Every one is separated from the next by a silver placer bead which promotes ease of handling during use.

Each glass bead in the 3 sequences represents the Goddess and so is identical in size and shape to all the others. But each sequence is colour-coded differently because they represent the 3 aspects of the Triple Goddess:

White -- representing the Maiden aspect of the Goddess. In women's lives, this is the youthful, dynamic energy of young women from birth until they reach their childbearing years. The Maiden is "complete unto herself," needing neither spouse nor children for a sense of purpose or completion. Her energy goes into creating and becoming herself.

Red -- representing the Mother aspect of the Goddess. In women's lives, this is the full power of female creative energy during their childbearing years until menopause. It is when women nurture new life through childbirth or child rearing, accomplish their life's work in other areas of endeavour or otherwise produce and build their greatest achievements in the world.

Black -- representing the Crone aspect of the Goddess. In women's lives, this is the time when wisdom, spiritual knowledge and existential understanding culminate from menopause until death. In patriarchal culture, "crone" is a devalued term used in derision and contempt, but in Goddess spirituality it is a term of honour, restored to its rightful place.

Each sequence of coloured beads is separated from the other elements by a faceted piece of turquoise offset on each side by 3 silver placer beads. Turquoise is traditionally characterized as a sacred stone of protection and good fortune. The turquoise separator stone's purpose is guidance. It allows anyone who is praying with their eyes closed to be able to identify, by touch alone, the commencement and end of each sequence. For that reason as well, its size and shape are also markedly different from the other beads.

Next time, my final post will discuss how I use these prayer beads.

I'm really impressed by all the thought, care, and symbolism that went into these beads.

i agree....there is so much thought and energy in this piece. i am happy to have croned. it's so liberating!

I love learning the reasons behind the deign; it's such a pretty piece made all the more beautiful by the 'whys' of it all.

I think I was born a crone

fINAL post? I pray this is not so ❤️🙋🇨🇦

This is completely fascinating.

I enjoy your explanation of the beads, Debra, and look forward to the next post.

Do you have certain prayers you say with your beads?

Also, 3 is the sacred number in comedy. 2 isn't enough, and 4 is beating the joke to death.

...I know, I'm an idiot. That's all I've got. This has all been really cool to read about, though. And it's interesting to see that Crone can be used as a compliment. I'm used to reading fantasy stories where a Crone is an old, evil witch.

The Triple Goddess has always been my connection to the divine. (said the good Catholic girl). Being a Crone is incredibly empowering.

Thank you for sharing the beauty and spirituality of the feminine divine.

My gawd those prayer beads are simply gorgeous! I can just feel the power behind them! So, so beautiful!

My biggest tattoo (on my back) is of The Morrigan done similarly to Amy Brown's version of Her (with a bit of change and flair as you do). I do things in 3's as well ;)

Much love to you and the Rare One! Blessed Be!

Thanks, I learned a lot from this series of excellent posts. Looking forward to how you use them.

where did you get that? I'd love to have one.

@ Jackiesue -- I designed it and my sister beaded it for me -- more details at my April 11th post!

I was wondering if the bead colors had meaning. you have a beautiful piece of art!

Many thanks for the explanation and I look forward to the next installment. Fascinating.

So beautiful Debra! As you know, I have many stones and crystals, but I do not own a set of prayer beads. None have captured me, the way yours has! So much feeling in them!!! So beautiful!!

Lovely Debra. I think it's a beautiful way to honour the Triple Goddess. :)

These are beautiful prayer beads and the symbolism behind this design is amazing. I've never seen anything like it.

I've always wondered how prayer beads work. Looking forward to your next post.

Wow! I had no idea how much symbolism was woven into these lovely prayer beads, although, knowing you I shouldn't be surprised, Debra. Thanks for sharing. I struggle with being in the crone phase of life, and I still hope that the best is yet to come. Have a good one!

I love the symbolism and that there is much more to things if you look closer.

"how I use these prayer beads" - they certainly are good for a number of blog posts. I didn't cross the line did I?? Very nice looking beads and the symbolism is interesting. It's much better than the chocolate bunny symbolism which I still have not figured out.

i am really impressed with this elegant and sublime piece of art which symbolizes such marvelous aspects of a woman's life .

i felt respect and honor for your sacred beads that stroll your spiritual energy in such a beautiful way.

i am glad you shared this amazing knowledge with us dear friend as it sounds special!

Next time someone asks me why red and black are my favorite colors, I will send them to this post.

Even though I didn't know about this, I always thought of crone as good.

Intersting series, Debra. Thanks for sharing it with us.

So interesting - I had always thought that my Celtic charm, the Triskele, stood for Mother, Maiden, Crone (someone told me that), but I just looked it up and it stands for Land, Sea, Sky. Thanks for clearing that up!

@ Lynn -- I suspect the oldest, most pagan meaning of the Triskele is an honouring of the Triple Goddess and that the "Land, Sea, Sky" interpretation is a more recent, i.e. christian, re-interpretation. A lot of that went on in Celtic spirituality.