For centuries, prayer beads have been used by people in many spiritual traditions, including Islam . . . 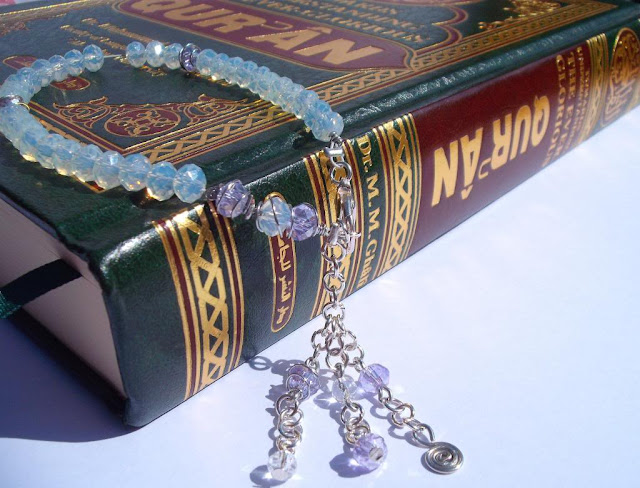 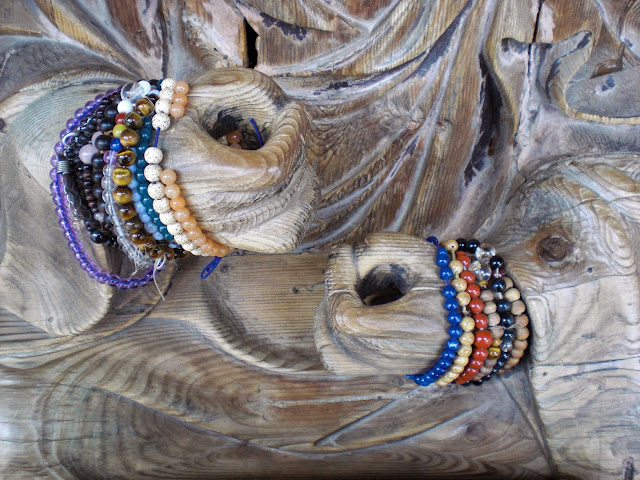 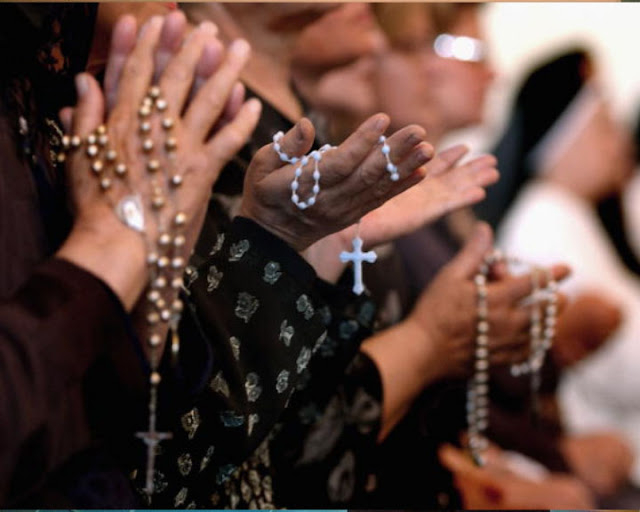 . . . and Paganism too. Our oldest visual depiction of prayer beads comes from Ancient Greece. Even our modern English word "bead" comes from the Old English "bede," which means "a prayer."

Prayer beads help people to focus their minds, to give structure to their communion with the Divine and to keep track of where they are in a prayer cycle.

Some contemporary pagans use prayer beads as well. Last autumn, I felt a pull to design my own set of prayer beads to honour the Triple Goddess, using some suggestions and examples from the internet. I then gave my personalized design to my sister, who is a talented beader and jewelry maker. She did an absolutely fantastic job of beading it for me as a Yule-Christmas gift! Needless to say, of course, these prayer beads are extra special to me because of the infusion of our "sister energy" in their creation. Here's the finished set, displayed (as goddess prayer beads should be when not being used) in the Sacred Spiral of Life arrangement: 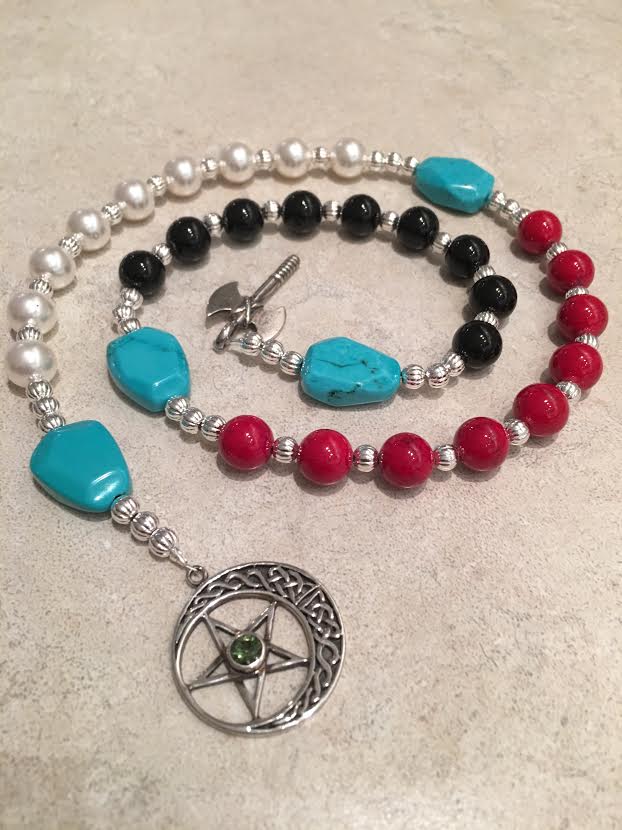 In a series of upcoming posts, I'll be explaining the spiritual and other significance of the first and final attached items, the number-and-colour symbolism of the various beads, and how I will be using these prayer beads.

That is a very, very cool design. Like, wow. And that you both made it together, powerful stuff. Love it.

pretty design; please do explain its meaning and purpose.

what a fabulous gift! i bead too. maybe it's time i make some prayer beads. i might just make worry beads!

Your "sister" design is really beautiful; I'd love to know the meaning[s].

Your sister is really talented.

hail to praying to Thor's Mjolnir, sistah! :) I like to pray to Loki's horn (in every naughty meaning possible)

That's very interesting! I am baptist myself, so I don't have any prayer beads, but I've seen them on some of my Catholic friends and they're very pretty

Now that is a gorgeous set of prayer beads! I have prayer beads brought to me from India (special request) and from my very own favorite store Prairie Sky in Wolseley. I just adore them both.

Very pretty! Debra, have you read about the Quadruple Goddess theory? I find I can relate more to that than the Triple. Maiden, Mother, Queen, Crone Just food for thought :)

I have watched many men playing with their prayer beads on my travels, and often wonder what they are comtemplating - your sister made a lovely job of making your beads.

That's a beautiful set of prayer beads. On our first trip to Athens Laurent brought me a beautiful set of "worry" beads (prayer beads)in silver and topaz. Sadly I only had them for two weeks - someone pick pocketed them on the Plaka. I only hope whoever took them found them of benefit in their prayers and meditation.

I have prayed the Rosary far too many times while growing up Catholic. The associations I have with that ritual and with the beads are not necessarily positive ones. I wrote about it in my memoir. I hope your beads bring you better results.

What a beautiful design - I'm looking forward to the educational part of this...

These are so beautiful. Your sister should sell them. Well, if she doesn't already!

I'm looking forward to reading your explanation of the components.

Embued with Sister Energy. They are already working with you.

Love this, looking forward to your descriptions.

If I had a dollar for every prayer my parents said on their beads, I'd be wealthy. But I was anyway.

Beautiful design - it has a nice flow to it. I've been considering prayer beads lately - and look forward to the rest of this series.

Beautiful. I can't wait to hear the significance of all the details involved in creating such a lovely piece.

Oh yes, bedes, I remember them from my Catholic past.

I love the sister energy and the spiral display of the beads. Nice.

My niece is married to a man who is a non-practicing Muslim (they live in Turkey) and he carries prayer beads, saying he likes to fiddle with them. It's something he's always done.

I've never had prayer beads, but I suppose the Jesus chain I wear around my neck is made of beads, does that count?

Beautiful piece! Prayer beads is something I know very little about. They do have quite a history!

Very interesting. I will follow you next postings to learn more.

A number of years ago, when I was in the military, we flew into Turkey and I saw worry beads for the first time. When I returned to Maine I took moose droppings, dipped them in acrylic, and made worry beads for the crew. I also made moose pearl ear rings for my wife. A few years later I found moose dropping ear rings on sale at L.L. Beans. I missed my chance of being an a moose crap millionaire.
I do wear Buddhist beads.
the Ol'Buzzard

Looking forward to the upcoming posts!

Very beautiful!! My oldest daughter creates jewelry and has had her own business for it since she was 8 years old :-) Thank you for sharing, have a wonderful day!

She did a beautiful job. They are beautiful.

Kudos to your sister for great work. Love the outcome!

Debra, She did such a beautiful job......I know you will think of her everytime you use them.

Those prayer beads are gorgeous and they look amazing. Both you and your sister did a fantastic job. I've never used prayer beads myself, but I did wear a rosary for a while. I'm not sure what happened to it actually.

love the beads!
I wear beads almost every day , never really thought about the significance. My latest set was made with beads from Ghana.

There prayer beads will have a special significance to you because they were crafted by your sister. My sister Barb designs jewelry too. Your Alpha and Omega symbols are the perfect size for such a chain of beads.

Truly beautiful and meaningful!! I can't wait to read more about your prayer beads Debra! Big Hugs and Happy Easter!

Lovely. I love the beads you chose and the craftsmanship.