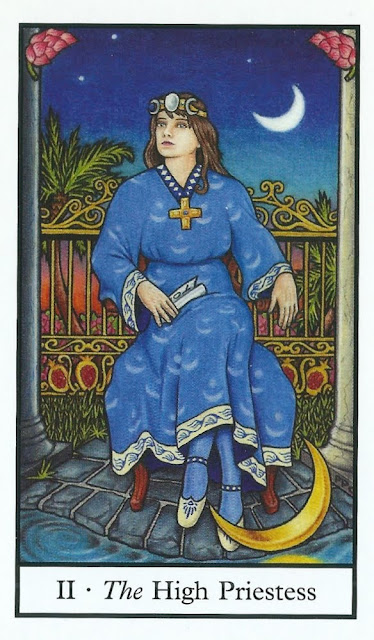 A High Priestess's personal knowledge, understanding and truth always come from within. Men and women who have the High Priestess as their soul card tend to be deeply intuitive. Unlike other people, they easily perceive all the unspoken truths and subtle undercurrents in any given situation. Receptive and empathic, they can often experience other people's feelings as well as their own. This can result in High Priestesses displaying quickly-changing moods and emotions that can surprise other people who are less sensitive.

In a relationship, High Priestesses are independent and self-sufficient, needing neither spouse nor children to feel truly complete or whole. They are motivated primarily by their own feelings and emotions. A certain amount of solitude is necessary for them to process their deep emotions and intuitive natures.

If, however, High Priestesses get lost on their soul journey, they can veer wildly from one extreme to the other. Paradoxically, they can simultaneously appear to be both deep and superficial, flexible and fickle, logical and illogical, warmly sensitive and coolly distant.

There are two other major arcana cards in this constellation which influence a High Priestess's soul path: Justice and Judgement. 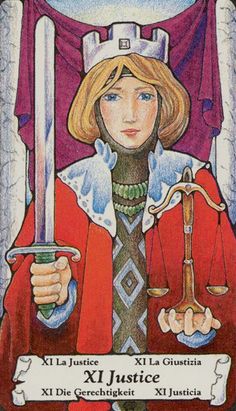 In the lives of many High Priestesses, the influence of the Justice card falls into their Shadow as a hidden factor. Their sense of right and wrong becomes too overdeveloped and, as a result, they can become hypercritical of both themselves and others. The challenge of a High Priestess's soul journey then becomes to learn from this hidden factor. The Shadow can be integrated by taking responsibility for their own lives rather than by blaming circumstances or other people.

But when the influence of the Justice card is positively felt, it causes High Priestesses to be true to themselves above all else. High Priestesses will not tolerate unfairness or imbalance in their life, community or society. When the Judgement card falls into a High Priestess's Shadow, it too causes extreme self-criticism but, in addition, also makes the High Priestess feel that others are so much more powerful that change and transformation are impossible. High Priestesses must learn to take action and be responsible for changing their own lives. Bringing truths up from the depths to the surface can be liberating.

When the Judgement card is experienced as a positive influence, it becomes a source of awakening for a High Priestess. Limitations of the past can be overcome and transcended. High Priestesses typically have a number of such epiphanies during their lifetimes. Often the Judgement card will also result in the occurrence of many synchronicities over the years  -- seeming coincidences that are nevertheless heavily imbued with personal, emotional or spiritual significance.

Next Week: the Empress Soul Card

[NOTE: If you haven't yet determined what your Soul Card is and would like to, please go to the introductory post of this series found here, do the calculation and play along!]

I've never known much about Tarot , well except that the cards are each in themselves a work of art, you're enlightening me to such an interesting craft,

I just determined what my Soul Card is and was kind of surprised by the result: strength. I did the math twice (I used Alexa - man, I love that thing!). This might come as a surprise, or not haha While I have a strong faith in God, I also have a strong belief in other spiritual journeys. For me, it's all about the paths meeting in one place, something bigger than ourselves, if that makes sense?

I had my cards read by a friend of mine, whew, over twenty years ago. Where does the time go? Anyway, the woman who did it was phenomenal and spot on. All these years later, I can tell you that she knew her stuff. On a side note, I also had my tea leaves read by a family member - same thing.

Cool- I wonder how many High Priestesses I know? This could describe any of my 4 remaining sisters!

This is fun. I want to get out my Tarot cards! Thanks for doing this series.

Thank you for doing this. I have some unfinished business at the moment, and then will retreat to study again.

It sounds stressful to be a high priestess!

OMG I'm a High Priestess, at least according to the description! All bow to me (you first, Hiddles)! :)

Neat!! I am awaiting next week for my card!!

Another fascinating post! I don't have any High Priestesses in my core group (that I know of), but some of the characteristics sound familiar.

Now to figure out who is a High Priestess in my circle of friends and family!

This is so fascinating! I'm not sure if there is a HP in my life, but now I have clues...

I am a Magician apparently - look forward to learning more.

"get lost on their soul journey" - hmm, google maps won't even help in that situation.

I'm kinda blown away, because it's a spot on description of me. I AM a High Priestess too. Zodiac readings never convince me, but this most certainly does.

PS Pending mail service rates, you should get something for your High Priestess very soon. It was mailed last week.

Very much enjoying these tarot lessons :)

I am loving this! Looking forward to more.

All of that really sounds so much just like me.

I loved this post because I love this card!!! Many greetings!

Oh... Thanks, I just love hearing that ..athlete, I don't look the part but I feel it! And by saying that I got reminded of your previous post where you mentioned the side effect of training, bursting into inspirational quotes... Haha!

My soul card is the hermit, but the HP feels like me.

"experiencing others pain as their own "

sounds like mine in a way but this is not actually mine .
reading about cards is really INTERESTING ,something i like so much
thank you for sharing this dear Debra!

I had to come back and read this. This is my mom and describes her perfectly, especially the lost on their soul journey part!