Continuing from yesterday's post about Jacob/Israel wrestling with the angel, I love modern re-interpretations of old myths and classic stories which explore ancient issues in light of today's sensibilities and experiences. Far from being disrespectful of the originals, modern re-visioning shows that these myths are still alive and relevant to our times.
One of my favourites in this genre is Margaret Atwood's 2005 novella The Penelopiad. It re-tells the myth of Odysseus from the point of view of Penelope -- faithful wife, abandoned spouse, single mother, a girl and woman surviving in a man's world. I read the book shortly after it was published and highly recommend it. It's a complex re-examination of perspective, guilt and the often difficult nature of causation.
In 2007, Margaret Atwood adapted The Penelopiad for the theatre. It was first staged as a co-production by Britain's Royal Shakespeare Company and Canada's National Arts Centre. This autumn the play was restaged by Calgary's Alberta Theatre Projects. We saw it when we were in Calgary at the end of September and enjoyed it immensely! 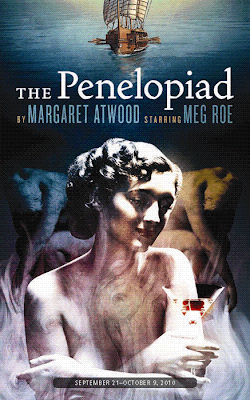 The play has an 11-woman cast -- Penelope and her 10 maids. Most of the maids also have dual roles as other characters. All the male roles are played by the maids (Odysseus, Telemachus, the suitors, etc.) -- and the women did a good job of projecting believable male mannerisms and appropriate butchness. Jamie Konchak as Odysseus was especially good. 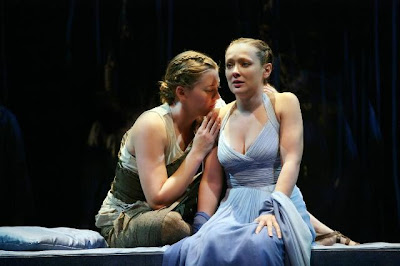 [Jamie Konchak (in green) as Odysseus and Meg Roe (in blue) as Penelope. Photo by Trudie Lee]
To date, all productions of The Penelopiad have been underwritten by fundraising campaigns among women to help cover the enormous cost of such a large cast. It's money well spent! The Penelopiad brings a much-needed balance to Homer's traditional, testosterone-driven Odyssey.
Posted by Debra She Who Seeks at 05:32

I think I would like to read this...even though I never got through the Odyssey...

I love M. Atwood's work and this sounds really interesting. It reminds me of the old book, "The Women of Troy." I don't live too close by where they have great plays like this, but I'm going to keep my eyes open.

This is one of the few Margret Atwood books that I haven't read - you have reminded me to rectify that!!

Thank you so much for that post. I do love theater and would am sure I would really enjoy this. I will be watching to see if anyone in my area (or anywhere I am traveling) for a preformance. Thanks again.

I'll definitely put this book on my list to read. I loved The Odyssey (and the Iliad) and look forward to reading this one as well.

Neat. I think I might have to check this out.

am I crazy or is there a movie version of this..for TV?...it sounds so familiar..
I will get Nancy to get the book for the library.

No, there's no TV or movie version yet, YDG, but hopefully someday!

Nice! Thanks for sharing! I'm just finishing teaching the Odyssey, and yesterday had a minimal but interesting discussion on poor Penelope.

This play looks wonderful. I'm adding this book to my Winter reading list - thanks!

And I loved that video in the previous post!