My Rare One and I are not big into wine so when we visited Tuscany in 2008, we only toured one winery. We visited the Casato Prime Donne in Montalcino, a region famous for its red Brunello wine. Montalcino is south of Siena and Florence and in the late Middle Ages, it suffered greatly in the power struggle between those two city states. 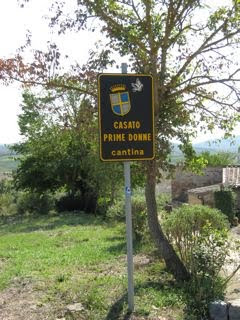 The Casato Prime Donne is owned and operated entirely by women, a rarity in Italy's male-dominated wine industry. This assertive feminist connection was the drawing card for us, not the wine!

But speaking of the wine, it is aged in the Casato's beautiful old stone cellar house -- 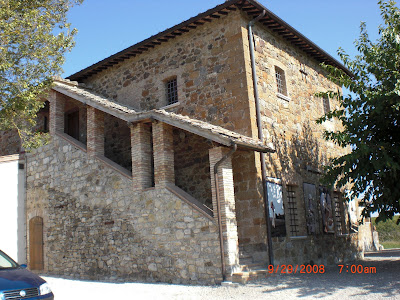 There was lots of art displayed on the buildings and grounds -- see the white ceramic doves high up under the eaves on one side of the building? 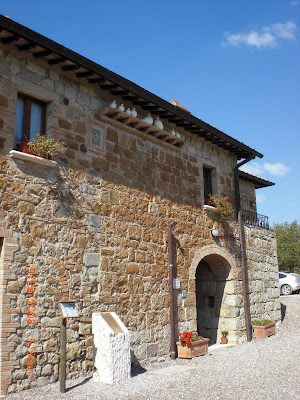 We arrived at siesta time after lunch when everything was closed, so we spent about an hour walking around the surrounding vineyards and countryside. The soil here is heavy, dense clay which is ideal for only two things -- growing grapes and making terra cotta pottery and other items. No wonder those activities were traditionally Tuscany's two main industries! 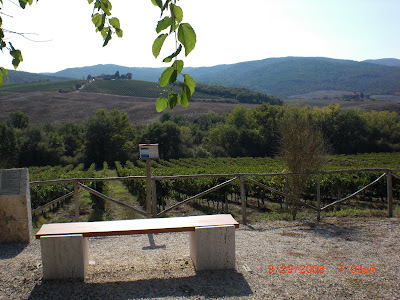 Harvest was just starting on the day we were there and already, the fields were dotted with many bright plastic containers full of grapes. My Rare One had a lovely conversation with some women harvesters even though no one spoke each other's language. She can talk to anyone! 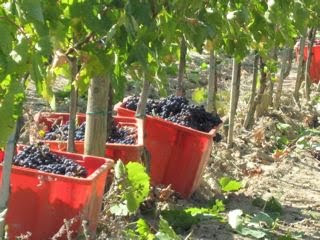 this is wonderful. i am like your rare one in that i can talk to anyone too. language is never a barrier for me. i love those ceramic doves! can't wait for part 2!!!

I love your tours. Always makes me feel like I was there.
Mary

Love the old stone house. So much history. This is going to be a fun tour! :0)

Gorgeous, simply gorgeous! I've always wanted to visit, but doubt that I will, so your photos are a very welcome bright spot in my day.

My older daughter who is an art teacher is headed to Italy in June, on a tour that not only focuses on art, which thrills her of course, but they will visiting some vineyards too. .she loves the romance, and she loves the wine. I do hope that she decides to come back home! lol

I'm looking forward to the rest of the tour, but for now, I'm going to go back and savor your photos some more.

what beautiful fields! You must have had a lovely time....looks wonderful...

I so want to go to Tuscany! Thanks for the tour (or part thereof) Debra!

Hi, I just popped in from Maggie's Garden. I see your gloved hands at most of the blogs I visit so decided to stop by. Very interesting blog you have and I like it. Congrats on your 8th. Anniversary and how wonderful that women run the winery. Excellent! I'll be stopping by from time to time to read your interesting posts. Thanks for sharing. Have a great rest of the week, nice to meet you.

It must have been beautiful, whether you like the wine, or not.

I've always wanted to go to Tuscany and your photos make me want to go even more now! I don't drink alcohol but it seems that wineries are so beautiful and peaceful. I love the fact that Casato Prime Donne is run by women too. After all the Goddess is the caretaker of the earth, so it's time for the good old boys to move over and make way for the women. Looking forward to exploring more of this winery on your posts.

In my next life I hope to travel more but in the meantime, I will travel vicariously. Thanks for the "trip" to Tuscany. I'd love to go there myself after I do a serious tour of the UK.

This is fantastic. I so need to get out and visit the wineries sometime. But this will have to do for now. Thanks so much - looking forward to part 2.

Beautiful Italy! I'll have to keep an eye out for their wine, because I do love my vino.

What a fabulous trip! Your Rare One sounds amazing, the perfect travel [and life] companion. The doves are incredible.

Sounds wonderful Debra! I hear the scenery is something else. A must place to visit.

Jealous! Haha! :) Beautiful photographs--enjoying a little piece of Tuscany here in the midwest. :)

Beautiful photographs! You captured it so beautifully. :)

Both amazing and beautiful. You make me want even more to visit Italy.

I think you both are very rare and very beautiful.