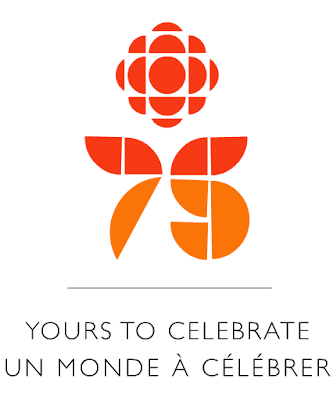 This year marks the 75th anniversary of the Canadian Broadcasting Corporation, our publicly-funded national radio and TV broadcaster.
In the 1960s when I was a kid growing up in a one-horse prairie town in the middle of nowhere, the only TV channel we had was the CBC (in black and white, of course). The CBC was definitely the dominant cultural influence in my life until I was a teenager and a couple more TV channels finally became available to us.
I loved the CBC then and I love the CBC now. So to honour its 75th anniversary, I'm going to explore some of my favourite CBC memories in a series of posts. Canadian readers (especially "those of a certain age") will remember many of the same things too, I'm sure. And as for American and other readers -- well, here's your chance to learn about Canadian culture, LOL!

As usual, this series will appear periodically and randomly over an unknown length of time, i.e., whenever something occurs to me!
Posted by Debra She Who Seeks at 05:30

Oh I LOVE the CBC! Huge fan, especially of CBC Radio. I listen to it every day. That is how I find out about the weird and crazy crap that happens where I live that never appears in the news anywhere else. I listen to As It Happens every night as I make dinner and love their stories.

lover it too and hope it continues..read some rumbling from our current government :(

I'm a Yank and look forward to your series! I have watched the quality of our Public Broadcasting network get watered down more and more as funding has been cut and cut. The constant pledge drives, the reruns. I still adore the nature/science things, but... it's frustrating.

But I will be reading your series about Canada with pleasure. I've learned a lot about my northern neighbors through reading blogs. Often this country has made horrid jokes about some sort of lack north of the border... more often than not, in the last decade, I have considered Canada the civilized country.

Now I'll be accused of being anit-American and unpatriotic. But I feel the more I love my country, the sadder I am at the erosion of all that I love.

I digressed. Never mind. I just enjoy your blog, as you know!

I would like to hear about some of CBC's best programmes! Did they have some popular shows?

i used to listen to cbc radio every day when i lived in canada.

Many years ago (20+) when my first Husband was stationed in Alaska, the CBC was the only public TV station we received. I loved it! My kids learned a good deal of French from watching Sesame Street on the CBC.
Happy Anniversary CBC!

CBC for me is the voice of Vicki Gabereau...."As it happens"...loved that show!...Alan Maitland too, of course....

I've never seen the CBC, but I remember having three stations to choose from. We really enjoyed those shows back then.
Mary

never seen CBC either, but then again i hardly watch TV anymore

I'm proud of our Dallas PBS(public broadcasting system) for being the first channel to bring the world Monty Python's Flying Circus..hot dang

I grew up with the CBC as well, Friendly Giant...is that OK to say...looking forward to your views and return to the yerteryears!

I've never heard of CBD before, either. I do remember when we only had 3 channels. Now I've got hundreds but almost never watch any of them.

There is something about Loving CBC that few non Canadians will understand. I remember listening to Royal Canadian Air Farce while my father tried to get my pregnant cousin to the hospital during a snowstorm. I first hurt about Happy Potter driving through the moutntains and when I first arrived in Iqualuit, it STAR TREK was teh first show I saw.

How can we share so much but you never let me see you???

To be an effective secret agent, I must maintain my mystique of mystery, Cal. Sorry, guy.

But I have double secret probation that gives me access to everything in your file.

I beg to differ with Cal -- when you live in the USA very close to that long border between our two home countries, radio waves and television signals have a wonderful habit of sneaking through, past homeland security and all of the shakedowns and car searches. I've listened to the CBC on radio and watched it on TV for over 20 years now, and always appreciate the refreshing perspectives on both national and international news. Happy Birthday CBC! Long may you reign!

I love the CBC and listen to Jian almost everyday. Also, Cross Country Checkup on Sundays - I don't know exactly how long that program has been on, but I remember listening to it as a teenager....

I discovered CBC as an adult, when we lived in a small town. The radio linked me to my old home town, Toronto, and I found so many artists through listening and writing down the time and day, then looking them up online. Now I don't listen as much, but listen to CBC music streams at work, usually Canadian Songwriters.

i loved cbc tv... and radio... no longer have tv, and the arrogant assholes on radio-1 really piss me off, both in halifax and now toronto[the stations i can pick up]