It's Grey Cup weekend again! This Sunday, the championship game of the Canadian Football League will be fought between the British Columbia Lions (Western Division champions) and the Winnipeg Blue Bombers (Eastern Division champions). And this year the lucky buggers won't even have to freeze outdoors in the snow because the game is in balmy Vancouver's domed stadium. 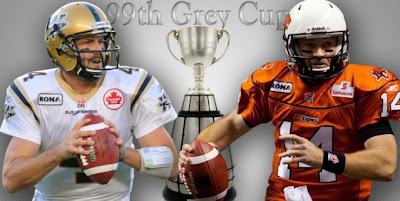 I usually cheer for the West but this year I must cheer for my old home town of Winnipeg. The Peg is actually a Western Canadian city but it has been placed in the CFL Eastern Division so that both Divisions have an even number of teams.
The Blue Bombers have not won the Grey Cup since 1990, which is the longest drought for any team in the CFL. Another good reason why Winnipeg deserves to win! Go Bombers Go! 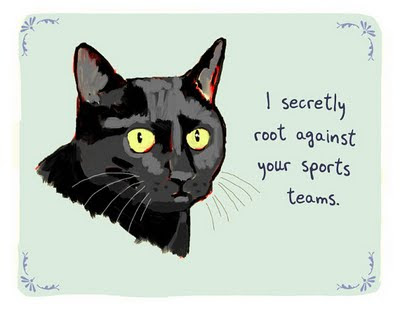 Her Royal Highness is cheering for the B.C. Lions, of course. Cats always stick together.
Posted by Debra She Who Seeks at 05:30

Games played outside in the snow/rain and on muddy fields just seem more 'fun' to me.......

Haha, love that pic of HRH! I heard on the news that they are, thankfully, not concerned about the crazies from last year spoiling things. Should draw a different kind of crowd.

thats a good one, have a great week end, sounds like you will,

What's on the other channels? Kidding! No,really not....
Hope your team wins Debra! maybe their time has come?

Good morning hon...ya know I have not managed to get in a single game all season...will root for your guys though! Huge hugs to you hon, Sarah

Cats are notorious contrarians. The only solution is to name ALL the teams after cats.

I will vote for your team also because I just don't like how they beat our team!

I’ll hang with the cats and root for whoever they like.

(Probably rude to do that on your blog, but I am in HRH's corner.)

bc HAS to do something right... once they get rid of luongo, the iffiest goalie i've seen, they will win lord stanley's mug... even the winterpeg jets play better!

I bet HRH is feeling all bad about her feline, um... team, playing in the cold.

Well, I must say I don't keep up with sports, though I used to watch hockey for a couple of years. :-) I hope the team you're rooting for wins big!