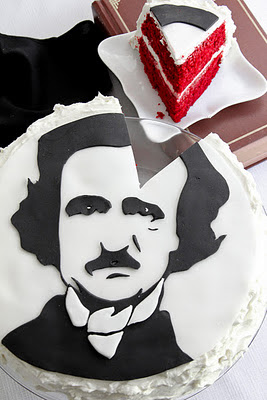 Today is Edgar Allan Poe's birthday -- he was born 204 years ago on January 19, 1809. A master of mystery and the macabre, he is credited with inventing the detective fiction genre as well as being a pioneer of science fiction. Who hasn't read and enjoyed his famous stories like "The Tell-tale Heart," "The Purloined Letter" and "The Murder in the Rue Morgue"?

Poe struggled to earn a living as a writer and literary critic. He had lots of enemies and detractors. In 1845 he enjoyed his greatest popularity when his poem "The Raven" was published. Where did that inspiration come from? 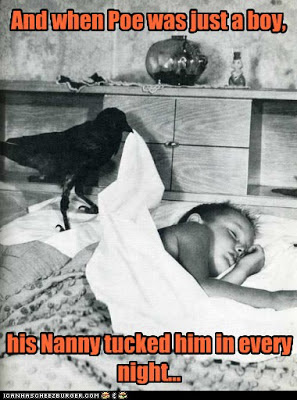 In 1849 at the age of 40, Poe died tragically young from disputed causes -- was it alcoholism, cholera, heart disease, syphilis, rabies? We'll never know for sure. But after death, he eventually achieved the great success and fame which had eluded him during life. Poe is now justifiably placed in the pantheon of greatest American writers. 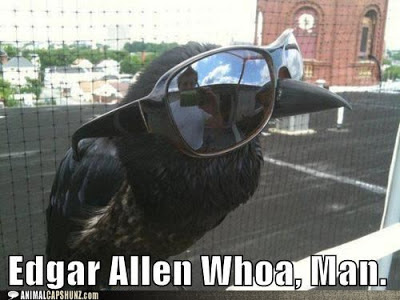 And hey, all you Poe fans, be sure to come back tomorrow for a special giveaway!

Still one of my favorite writers.

What a shame that he died so young.

unrecognised during his life like so many other men of art.

Love Poe's work. I would love to have a raven as a pet. Never mind the alarm clock waking you up, those birds are LOUD. Thanks for sharing!

i actually dated a guy named ed poe for a while...a whole other story. i say, let's dig him up and find out what he died from. he and natalie woods!

Just saw the movie The Raven, about Poe. Was very good. Love the Poe cake with red inside.

He had such a terrible life, I always feel sorry for him. He was a great man.

For some reason (thanks to an childhood full of Simpson episodes obsessions) I cannot think of Mr. Poe without thinking of various Simpson lines. "To quote the raven: 'what a shine!' " or "IT'S THE BEATING OF THAT HIDEOUS HEART! - I mean...oh, I think I hear something!"

I can't look at a raven without thinking of this literary genius.

FUN FACT- I used to eat my lunch while sitting on Poe's grave at least two times a week while I was in graduate school.

The cemetery he's buried in was right across the street from my school, it was a very popular lunch destination!

I'm a very big fan of Mister Poe's work, but I had no idea it was his birthday. Can't wait to see what you've got for tomorrow, Debra!

RABIES! EEEEEEK! One of my favourite things to worry about. I had never hear this possibility before. How absolutely dreadful.

awesome...love the pictures too...the raven is my favorite Bird

I didn't know he died so young either. I know his stories used to scare the hell out of me though!

I think it was Poe who coined the phrase "home is where the heart is."

Yes, Poe always will be in the top ten of my Fav Authors!

Great post! I didn't realize he died when he was only 40!

I heard somewhere that a lot of his inspiration came from the death of his mother who slipped in and out of a coma, seemingly dying and coming back to life repeatedly.

I have a great leather bound book with all of his stories.