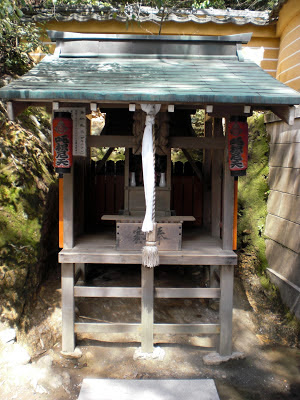 Buddhist temples in Japan often have smaller Shinto shrines within their precincts. I came across this charming little shrine near the exit of a temple in Kyoto. It honours the sacred kitsune (fox) messengers of Inari, the popular and all-important Shinto deity of rice. 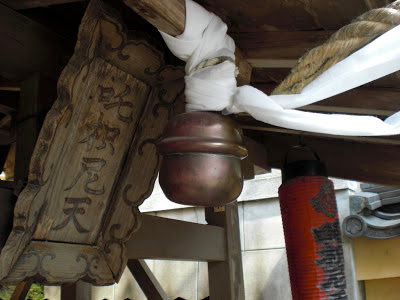 Peering inside the shrine, I saw a miniature red torii gate, two vases of greenery and an offering cup probably containing rice or sake. But what is hiding at the back behind the foliage? Two ceramic statues of white foxes with large ears and big bushy tails! Traditionally, one fox of the pair is male and the other is female. The kitsune of Inari are benevolent, protective guardian spirits and ward off evil. Legend says that their favourite food is fried tofu. 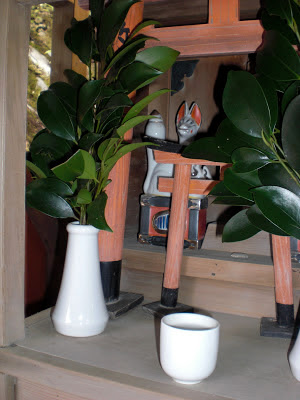 But Japanese mythology features many other kinds of kitsune as well, not all of which are good or protective. They are often tricksters and shapeshifters. Their mercurial moods and shifting loyalties teach many hard lessons. Because kitsune can be both allies and enemies of humans, it is proper to simultaneously revere and fear them.

Some of my favorite Japanese stories are about the kitsune. Fun post!

I find it amazing that the Native American culture also has tricksters and shapeshifters..coyotes tho...

I love how you introduce us to your travels.
Mary

beautiful, it must have the most amazing trip, I enjoy hearing about your travels,

Thanks for taking us on a little journey to start the day.

They look so cute with their big ears peeking out.

Those photos of yours are beautiful, and I really like what you shared about them as well, thank you!!!

My son is really into Japanese culture. He has a statue of a fox, very similar to the one in the photo.

I knew it was going to be fox based. Kitsune was one of the first Japanese words I learned.

I love that! Beautiful photos. The trickster resonates so deeply, but I can't think of a trickster in Christian mythoology... ??? Anyway your blog put me in mind of Amy Tan's book, The Kitchen God's Wife. You have to tread carefully around the Chinese kitchen god too!

Another fun voyage with you. You'd make a great tour guide!

i never knew this. very interesting!

Having seen the larger shrine, most people would have overlooked this smaller one. Good for you on taking note of it.

You always have such interesting posts.

So interesting...I learn something everytime I visit you.

Great photo and story. Thank you for sharing...love learning and feeling connected to other cultures.

I've read many stories about the Kitsunevso I love your shrine pics Debra.

Interesting! I like foxes. I loved visiting the shrines when we were there, too.

Your pictures are beautiful. I learned some new things. I know very little about the Japanese culture.

educating and entertaining! and "plowing" is right... you would make a great tour guide!

Honour both the good and the bad....a good balance! I appreciate your 'tours' Debra, you are a born instructor. Thanks.

Thanks for this Debra.

Yeah I would have thought the foxes would be slightly malevolent.

This is an interesting post! I am going to show my son, who has a fascination for all things Asian.

I saw many such little shrines in Japan all very charming. Beats the Jesus guy on the cross.

Navajo and Zuni have tricksters too..and it's usually the coyote..

interesting insight in Japanese mythology. Kitsune has been featured in many modern Japanese cartoons too, and not at all as a good character.

Such a beautiful shrine. It looks so peaceful...