The Treaty of Ghent 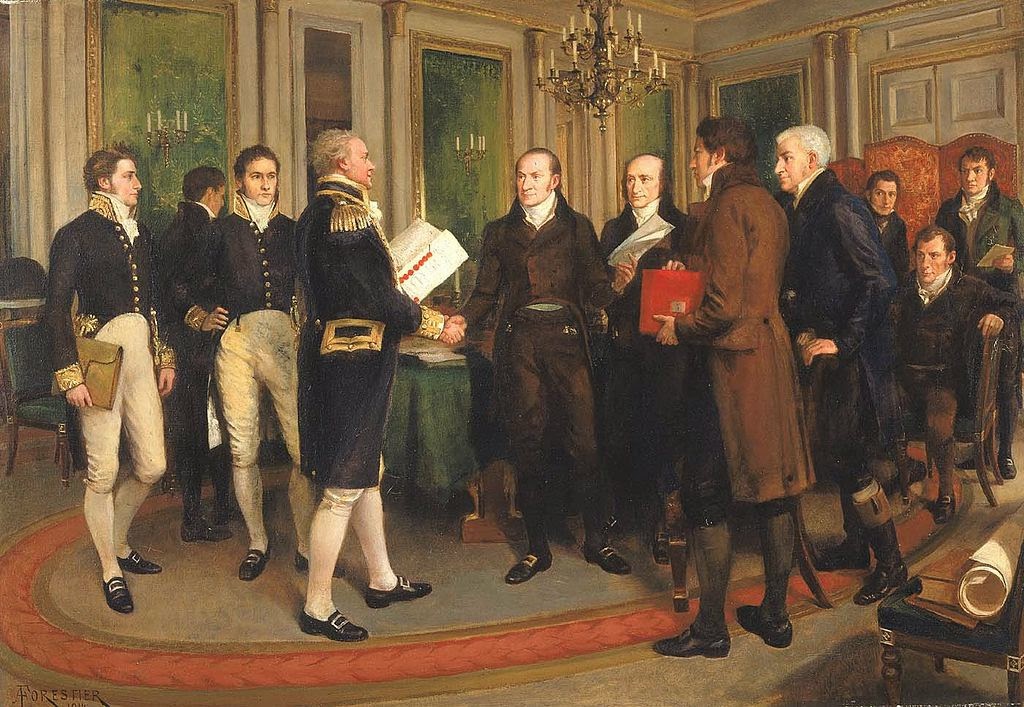 The War of 1812 ended two hundred years ago today when Britain and the United States signed the Treaty of Ghent on December 24, 1814. No territory changed hands. No borders were redrawn. No one really won and no one really lost. The war ended essentially as a draw, a stalemate. Both sides were frankly just glad to be rid of the hassle.

Historically, the war is significant only to Canada. By successfully repelling various American attempts at invasion, colonial Canada retained its English and French identities and forged a firm resolve never to be American. This reinforcement of a unique identity led 50 years later to the successful creation of the independent dominion of Canada.

There was only one small problem. The Treaty of Ghent was signed in Europe. News of the war's end had to reach North America by ship.

[Painting by A. Forestier, Signing of the Treaty of Ghent, shows Admiral of the Fleet James Gambier of Britain shaking hands with the U.S. Ambassador to Russia, John Quincy Adams]

Strangely enough, though the treaty was signed in my country, the news doesn't even mention it here.

Wishing you a wonderful holiday. May your Christmas Eve be filled with joy. Mary

Hmmm! I wonder why it was signed in Europe. I imagine I learned why in history class as a little girl, but at age 40 I certainly don't remember!

Yay for Canada keeping its identity

congrats to Canada for keeping dirty American paws off their territory! You might be the only one who ever succeeded in it

Sadly the big losers where the Native Peoples who fought bravely on both sides and then saw their promised land rights ignored.

Don't blame ya for not wanting to be American.......
Merry Christmas Eve! ♥

history lesson, made interesting, lol, where were you when I was in highschool, I may have remembered more if you had been teaching me, have a wonderful Yule!

According to Michele Bachmann the founding fathers worked tirelessly to do away with slavery, and the shot heard around the world was fired in New Hampshire and Paul Revere rode to tell the British that we would not give up our guns.
I wonder what she has to say about the War of 1812 - would be interesting
the Ol'Buzzard

I haven't heard about that forever but I do remember learning about it..vaguely..Have a blessed Christmas

I hate war, any war.

YAY Canada! I swear I learn more about history from my blogging pals than anywhere else :)

Happy holidays to you...

You're so good about historical rememberance. "Both sides were frankly just glad to be rid of the hassle." Sounds like a divorce!

Oh, that's unfortunate. Imagine being one of the soldiers killed after the treaty had been signed.

I can't wait to read your next post. I know (ashamed to admit) nothing about the war of 1812. and I won't spoil the surprise by goggling it.

Now you have me wondering whatever happened!

Ever think about switching careers, Debra? To be a high school history teacher? You would be a great one. You have the ability to make 'dry' fact history very interesting.
Merry Christmas to you and yours.

Just want to wish you a merry Christmas and may it be the merriest yet.

You make history fun! I wish my teachers were like you.

Happy holidays for you and all your loved ones!
Mwah!

Great post Debra. you have a gift. Merry Christmas.

Frankly, you'll are better off without us. Murica has it's flaws.

I bet if you take a poll of all americans not one of them know any american history that involves Canada...sigh*

Very interesting!
Merry Christmas my friend ;o)
Thanks for liking the new look on my blog ;o)
Big Hugs and I hope Santa is good to you ;o)

The postal system was much slower in those days....